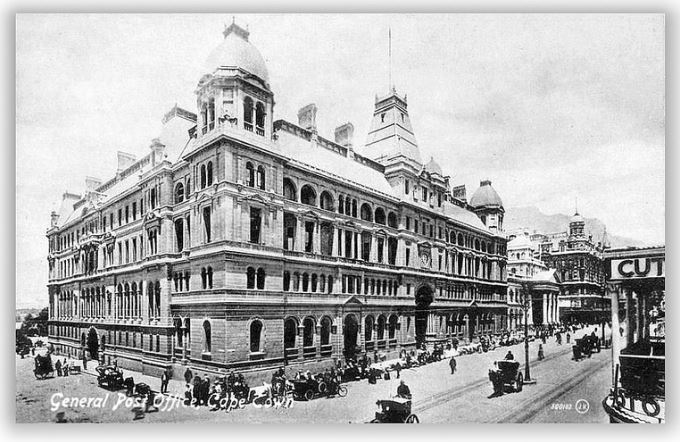 The Telephone Boggart of Cape Town The building where the telephone office was houses in Cape Town.

It was on this day in 1876 that Alexander Graham Bell patented the telephone.  I might retell the story of the 2,000-year-old telephone, or we might enter into debate over whether Elisha Gray was robbed, but there’s sickness in the house and I’m too tired to go there. Better to tell of a South African

GHOST IN A TELEPHONE OFFICE

A man who has recently returned from Cape Town, South Africa, tells a ghost story. He says:

“During my stay in Cape Town I heard a curious ghost story, which was and still is, causing considerable sensation in the place. The general post office, a fine four-storied building in Adderly street, the principal thoroughfare, is haunted by a genuine spook. Most people would consider that South Africa is too modern and go-ahead a locality for such old-fashioned visitations; but the following is the story, told by one of the telephone operators, a member of the Cape Civil service:

“One night about the end of October last, he was sitting in front of his switchboard—the time was near midnight and very few calls were being made at that hour—when he was suddenly aroused by a knock. Receiving no reply to his inquiry of “Who’s there?” he looked around and to his astonishment saw a strange figure bobbing up and down on the other side of the glass partition which separated his room from another. At first he fancied he was dreaming, but on rubbing his eyes and looking again, he perceived that the figure possessed the head and body of a man, but the lower limbs were lost in a sort of mist. The eyes were terrible to behold and seemed to blaze with a red and green fire.

“At first the clerk was naturally very much alarmed, but he soon screwed up enough courage to accost the specter with the first words that came into his head, which happened to be, “what, ho!’ The ghost did not deign any reply, but, gliding through the locked partition, advanced toward the terrified man and then halted. In sepulchral tones it now addressed him with these words: ‘I want X__’ (mentioning the name of one of the clerks in the department). The man was speechless, whereupon the apparition, seemingly displeased at his silence glided nearer and glared angrily at him. A few minutes later the night watchman, going his rounds below, met a shivering individual with his hair literally on end with fright, and with difficulty recognized him as B__, the telephone clerk. B__’s story was entirely disbelieved by the watchman, but to reassure him and out of pity for his fearful state of mind, he went with him to search for the specter. Nothing, however, was to be seen.

“The next night the same thing happened, and this time the clerk fled in terror from the building. On the third night he refused to go on duty without a companion. This was granted him, and the two went on together. Again the specter appeared, repeating his former request. One of the clerks thereupon seized a ruler and made a frontal attack upon the supernatural visitor, but it immediately melted away through the glass partition and disappeared.

‘A week later, about 9 o’clock in the evening, a watchman on the first floor saw a headless man walking about. He gave chase, but it vanished as the other had done. On another occasion, at midnight, a watchman declares that he distinctly saw a man dressed in khaki sitting at one of the office tables. He spoke to him and asked what he was doing there. The man thereupon faded away as mysteriously as the others. A great many queer noises and rappings are continually being heard, causing men to fight shy of night duty in the post office, even at the risk of losing their appointments.

‘A member of the Psychical Research society was taken through the building. He heard the noises, and said he would interview the spirit or spirits. He changed his mind, however, the reason he gave was that it was a very angry and dangerous spirit which he would not care to meet. His opinion did not succeed in consoling the night staff, who declare it is the ghost of a man who was killed during the construction of the telephone department. On the day I left Cape Town a thorough examination of the post office was contemplated.” Correspondence London Graphic.

Considering the “modern” setting, full of the latest in go-ahead telephone technology c. 1900, this is a strangely atavistic spectre.  Like the shape-shifting boggart it assumes various guises: half-man-half-mist, a  headless man, a man in khaki; it seems angry and dangerous, like so many local British bogies, and like the Black Dog, it has terrible fiery eyes, which also hint at some sort of alien entity. But I don’t recall boggarts speaking, let alone demanding a word with a telephone clerk. What business could it have had with the man? Or had it come to collect him?

Any follow up to this story? Give me a jingle at chriswoodyard8 AT gmail.com