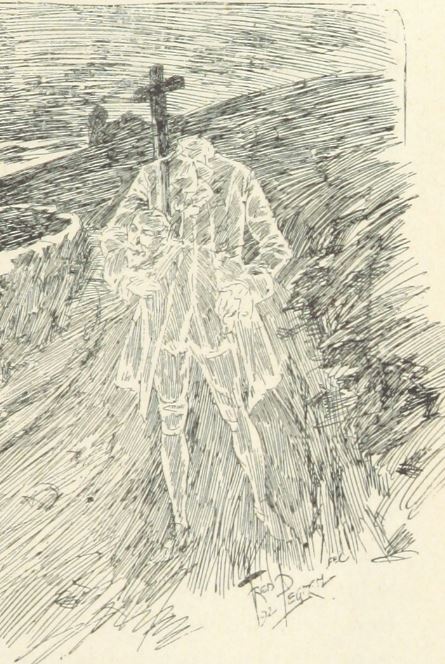 Mrs Stone and the Headless Ghost A headless ghost seen in a Wiltshire lane.

Certain species of ghosts who once had their fifteen decades of fame, seem to have lost their cachet. Formerly every respectable  Highland castle had its Green Lady, while Screaming Skulls made Dorset nights hideous with their din. It was a hoary cliché that the English countryside used to be overrun by headless horsemen and funereal black coaches drawn by headless horses. Yet today they seem found only on databases of local legends, possibly killed off by a decline in the use of judicial beheadings.

Even if we attribute three-quarters of reported headless ghosts to smugglers with pots of phosphorus, the fact remains that the motif was a beloved one, even persisting in the United States in urban legends of headless motorcyclists.

Today we visit an unnamed village in Wiltshire, the subject of Village Notes by Pamela Tennant, for  a headless-ghost story c. 1900 with some chilling details.

Since I was unable to find a copy of Village Notes online, this story is quoted from a review. In a moment of confusion the review did not make it clear that the narrator of the ghost story, described as married to a pig-dealer, was not the book’s author, Pamela Tennant, [Pamela Genevieve Adelaide Tennant, Baroness Glenconner, afterwards Viscountess Grey of Fallodon] who proved to be far too posh to write in the local dialect.

I puzzled over the identity of the narrator until I found a longer excerpt, which calls her “Mrs. Stone,” almost certainly a pseudonym, although that lady may have revealed her real Christian name as Rebecca and her husband’s name as Harry. From other information garnered on Village Notes, Mrs Tennant either changed names or did not name her narrators at all. I suppose if you are writing about the many characters in a close-knit English village it is best to be discreet about your sources, lest you end up in a Midsomer Murders plot.

But on with the headless ghost story…. Mrs Tennant began by writing about her informant’s “superstitions”:

She [Mrs Stone, the ghost-seeing narrator] had the greatest contempt for the State Church and its management of charities and, being a freeholder, held independent views. Her belief in the unseen world was very strong. She had once had a dispute about some property with a sister-in-law then living on Church rates; in getting out of bed in the morning she was flung down on the floor, and this was repeated three times.

She would say when recounting an experience: ‘I can see it in the looking-glass of memory.’ The chimney was regarded by her as being a dangerous medium of communication with another world and one much in favour with those whose services we are better without. For this reason she kept a bunch of gorse thrust far up her chimney when there was no fire. It blocked it completely, and, she said, kept the Powers out. Sometimes she would light the fire, forgetting the bush was there. Then the Powers had ample revenge in what followed.

Her husband had been a pig-dealer. ‘That’s a nice lot o’ young pigs, those,’ she would say. ‘Where?’ ‘Comin’down the road in a cart; and what’s more there’s a fine fat zow among ’em.’ A litter soon passed the windows driven by, and netted over. Among the litter was the sow she had heard at such a distance up the road. This was not, as might seem, an evidence of second sight. It was merely, as she said, ‘having an ear trained to pigs.’

She believed in the power of good held by a large flat-iron in her cottage. It kept the disk of the fender bright. It also kept strange cats from the cottage. This is her account of an apparition she once saw:— ‘Well, it happened the other day when I were acomen’ back home from the village. I’d been down about tea-time, and I’d stopped a little while; so by time I was comin’ home it was nigh on eight o’clock. It were a dark night, but not so dark but what I couldn’t see the road sort of glimmerin’ in front o’ me, and the hedge to my left quite black agen the sky full o’ stars. On the other side o’ the fence I could see all the lights in the windows of Felhampton House. I were just saying to myself, “Why, what a lot o’ lights they have got in Felhampton to-night! they must have company,” fer the lights seemed to go right up to the top windows, and it were all a blaze o’ light. When sudden, I were all in darkness. I couldn’t see the road, and I couldn’t see the hedge, and I couldn’t see the sky wi’ the stars. Nor yet I couldn’t see the lights in Felhampton House. But I see a figure agen the darkness, stretching right across the road. It were the figure of a man wi’ his arms out, they were wide on each side of him, and seemed all to bar the way. He were dressed in what gentlemen do wear in the evening, only wi’out a coat, for I seed his two arms in shirt-sleeves and the white of his shirt-front. But the sleeves weren’t like what they do wear now, for the cuffs were put in full at the wrist, quite different to now. It were a terrible sight, for it had no head, and was all in a cloud o’ darkness. I seemed like fainting, and “O Lord,” I said, “take it from me.” Just like that, “Lord, take it from me,” I said. And in a minute it were gone. I see’d the road agen, and I see’d the hedge, and I see’d the sky full o’ stars. And there on the other side o’ the road, I seed all the lights in the windows of Felhampton House.’ Then with a shake of her head, ‘O, there’s amany more of these nasty old haunted places about than people do think. That’s certain.’

I was intrigued by the utter darkness in which Mrs Stone suddenly found herself, which was similar to that experienced by the men who saw a vapor-man in Brown’s Woods. And the headless ghost on foot is a bit of an outlier; most of the Wiltshire headless spectres are seen with phantom coaches or horses.

Mrs Stone seems to have had an uncanny reputation from childhood. In another section she described how she and her family had persuaded her engaged brother to break off the match. The jilted girl’s mother cast a spell and the family never prospered after. Mrs. Tennant adds of Mrs Stone:

When she was lying in her last illness, it was difficult to get anyone to sit with her, or to tend her through the night. “She be so strange,” they said ; “she do see such queer things.” They thought she was a witch. Two or three days before she died a sovereign was sent by her to a very old woman, living in a small town some ten miles distant. It was sent to propitiate a long-felt evil influence, in order that her illness might be stayed. The old woman who received the coin was mother of the girl whose marriage all those years ago she had come between.

Recent sightings of headless ghosts or the identity of “Mrs Stone”? chriswoodyard8 AT gmail.com