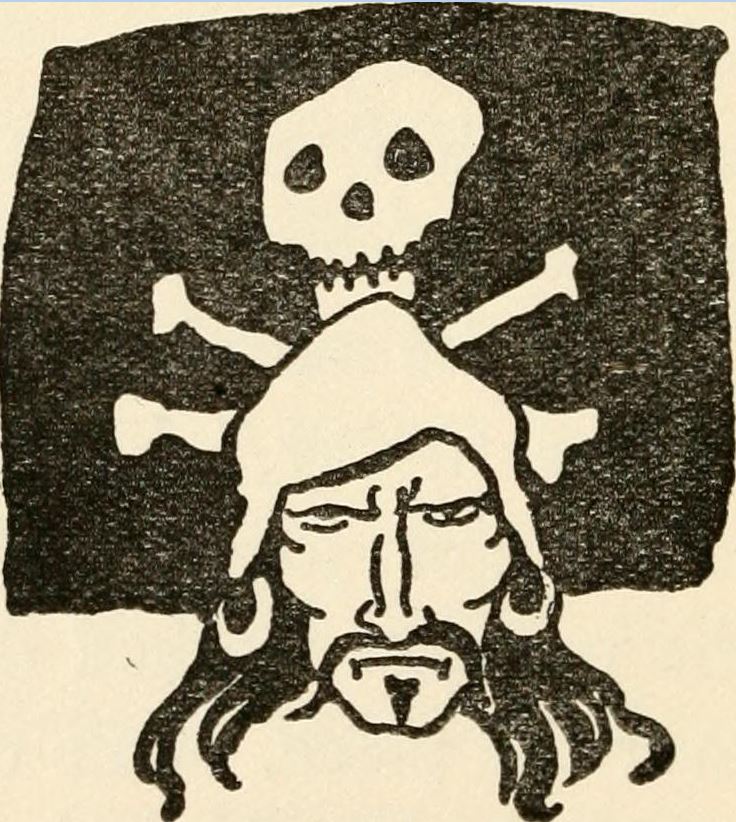 The Pirate-Wrecker and the Death Ship Pirate head and flag

THE PIRATE-WRECKER AND THE DEATH SHIP.

One lovely evening in the autumn, a strange ship was seen at a short distance from Cape Cornwall. The little wind there was blew from the land, but she did not avail herself of it. She was evidently permitted to drift with the tide, which was flowing southward, and curving in round Whitesand Bay towards the Land’s-End. The vessel, from her peculiar rig, created no small amount of alarm amongst the fishermen, since it told them that she was manned by pirates; and a large body of men and women watched her movements from behind the rocks at Caraglose. At length, when within a couple of pistol-shots off the shore, a boat was lowered and manned. Then a man, whose limited movements show him to be heavily ironed, was brought to the side of the ship and evidently forced—for several pistols were held at his head—into the boat, which then rowed rapidly to the shore in Priest’s Cove. The waves of the Atlantic Ocean fell so gently on the strand, that there was no difficulty in beaching the boat. The prisoner was made to stand up, and his ponderous chains were removed from his arms and ankles. In a frenzy of passion he attacked the sailors, but they were too many and too strong for him, and the fight terminated by his being thrown into the water, and left to scramble up on the dry sands. They pushed the boat off with a wild shout, and this man stood uttering fearful imprecations on his former comrades.

It subsequently became known that this man was so monstrously wicked that even the pirates would no longer endure him, and hence they had recourse to this means of ridding themselves of him.

It is not necessary to tell how this wretch settled himself at Tregaseal, and lived by a system of wrecking, pursued with unheard-of cruelties and cunning. “It’s too frightful to tell,” says my correspondent, “what was said about his doings. We scarcely believed half of the vile things we heard, till we saw what took place at his death. But one can’t say he died; because he was taken off bodily. We shall never know the scores, perhaps hundreds, of ships that old sinner has brought on the cliffs, by fastening his lantern to the neck of his horse, with its head tied close to the forefoot. The horse, when driven along the cliff, would, by its motion, cause the lantern to be taken for the stern-light of a ship; then the vessel would come right in on the rocks, since those on board would expect to find plenty of sea-room; and, if any of the poor sailors escaped a watery grave, the old wretch would give them a worse death, by knocking them on the head with his hatchet, or cutting off their hands as they tried to grasp the ledges of the rocks.

A life of extreme wickedness was at length closed with circumstances of unusual terror–so terrible, that the story is told with feelings of awe even at the present day. The old wretch fought lustily with death, but at length the time of his departure came. It was in the time of the barley-harvest. Two men were in a field on the cliff, a little below the house, mowing. A universal calm prevailed, and there was not a breath of wind to stir the corn. Suddenly a breeze passed by them, and they heard the words, “The time is come, but the man isn’t come.” These words appeared to float in the breeze from the sea, and consequently it attracted their attention. Looking out to sea, they saw a black, heavy, square-rigged ship, with all her sails set, coming in against wind and tide, and not a hand to be seen on board. The sky became black as night around the ship, and as she came under the cliff–and she came so close that the top of the masts could scarcely be perceived–the darkness resolved itself into a lurid storm-cloud, which extended high into the air. The sun shone brilliantly over the country, except on the house of the pirate at Tregaseal–that was wrapt in the deep shadow of the cloud.

The men, in terror, left their work; they found all the neighbours gathered around the door of the pirate’s cottage, none of them daring to enter it. Parson__ had been sent for by the terrified peasants, this divine being celebrated for his power of driving away evil spirits.

The dying wrecker was in a state of agony, crying out, in tones of the most intense terror, “The devil is tearing at me with nails like the claws of a hawk. Put out the sailors with their bloody hands!” and using, in the paroxysms of pain, the most profane imprecations. The parson, the doctor, and two of the bravest of the fishermen, were the only persons in the room. They related that at one moment the room was as dark as the grave, and that at the next it was so light that every hair on the old man’s head could be seen standing on end. The parson used all his influence to dispel the evil spirit. His powers were so potent that he reduced the devil to the size of a fly, but he could not put him out of the room. All this time the room appeared as if filled with the sea, with the waves surging violently to and fro, and one could hear the breakers roaring, as if standing on the edge of the cliff in a storm. At last there was a fearful crash of thunder, and a blaze of the intensest lightning. The house appeared on fire, and the ground shook, as if with an earthquake. All rushed in terror from the house, leaving the dying man to his fate.

The storm raged with fearful violence, but appeared to contract its dimensions. The black cloud, which was first seen to come in with the black ship, was moving, with a violent internal motion, over the wrecker’s house. The cloud rolled together, smaller and smaller, and suddenly, with the blast of a whirlwind, it passed from Tregaseal to the ship, and she was impelled, amidst the flashes of lightning and roarings of thunder, away over the sea.

The dead body of the pirate-wrecker lay a ghastly spectacle, with eyes expanded and the mouth partly open, still retaining the aspect of his last mortal terror. As every one hated him, they all desired to remove his corpse as rapidly as possible from the sight of man. A rude coffin was rapidly prepared, and the body was carefully cased in its boards. They tell me the coffin was carried to the churchyard, but that it was too light to have contained the body, and that it was followed by a black pig, which joined the company forming the procession, nobody knew where, and disappeared nobody knew when. When they reached the church stile, a storm, similar in its character to that which heralded the wrecker’s death, came on. The bearers of the coffin were obliged to leave it without the churchyard stile, and rush into the church for safety. The storm lasted long and raged with violence, and all was as dark as night. A sudden blaze of light, more vivid than before, was seen, and those who had the hardihood to look out saw that the lightning had set fire to the coffin, and it was being borne away through the air, blazing and whirling wildly in the grasp of such a whirlwind as no man ever witnessed before or since.

The story contains a veritable treasure-chest of folklore motifs: the voice announcing the wrecker’s impending doom, the Devil come to claim his own and dueling with the parson (shame he couldn’t conjure the fly-devil into a bottle), the too-light coffin, the taking-off of the dead man. And those Gothic elements! The black clouds, the black ship, the black pig (reminiscent of other satanic swine in folklore), and the pirate’s black character; it all adds up to a satisfying tale to scare the children with.

Pirate ghosts used to be as ubiquitous as phantom coaches and black dogs. Cornwall, in particular, was famous for its stories of brigands and wreckers. Where have they gone? Obviously there are fewer pirates roaming the shipping lanes of the Caribbean or the Atlantic, although there are still the occasional rum-fueled reports from New Orleans. Does this suggest, as I have often said, that ghosts have a statute of limitations, running down like an unwound watch as time passes and fewer believe?