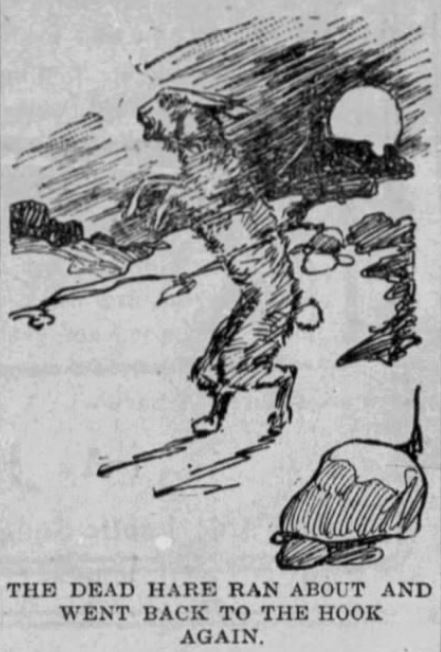 A busy day, so I offer the case of a “bewitched farmhouse” in Lincolnshire which contains some unusual details.

While this is a late syndication, it copies reports from January (when the trouble first started) and February, 1905. 1905 seems rather late for English witchcraft, although belief obviously lingered in rural areas.

A strange story of a bewitched farm house comes from Binbrook, a village on the Lincolnshire Wolds.

The house, which is known as the Walk Farm, is tenanted by a famous Lincolnshire ram breeder, Mr. William Drakes, and is occupied by his foreman, a man named White.

The foreman and his wife, according to a correspondent of the Sheffield Telegraph, tell weird tales—of a dead rabbit which detached itself from a hook outside the house, ran about and went back to the hook again; of plants in pots on the window-sill, which mysteriously tilt to one side, and then resume their former position; and of brooms which came dancing across the middle of the floor while the family were at dinner.

Then one day the clothes of the servant started to burn, although she positively affirmed that she was nowhere near a fire at the time. The girl was so severely injured that she had to receive medical attention.

The “witch,” of whose existence the neighbors are firmly convinced, is said to have commenced her visitations by breaking the legs of a number of fowls at different times.

Mr. White has given correspondents an account of the most recent extraordinary occurrences. His story was corroborated by his wife, children, mother and servants. When Mrs. White saw bottles toppling over one by one and falling from a shelf and break on the tiled floor, she called her husband and the servants, and they also watched the completion of the astonishing spectacle.

Two dozen bottles leisurely went to destruction in this way. Some of them contained paint and others oil. In the dairy three strings of home-made sausage were hung on a line, and after being hung for the third time they fell and broke in small pieces. A dozen large dinner plates moved from a high shelf and were deposited unbroken in a large earthenware dish. A dish of milk set for cream overturned, and a large pot of cream ready for the churn performed a similar feat. When the family were having tea, water poured into the kitchen from under the storehouse door until the floor was completely flooded. Investigation showed that a large, flat-bottomed tub had emptied itself. Offers to “lay the witch” have been received from all over the country, and Mr. White has accepted that of John Dunn of Grimsby.

A few weeks later, “the witch” moved operations out to the farmyard.

WHEELED BY A “WITCH”

Amusing stories have been circulated with regard to the supposed bewitched farm at Binbrook, but they are surpassed by one a correspondent now relates. Much fun has been caused in the locality, and there are some to vouch for the truth of the almost ridiculous incidents. It is said the “witch” has left the house, and is playing pranks among the farm hands.
A labourer yoked a pair of horses to a waggon, which was standing in a shed, with the intention of hauling it out for work on the farm. The waggon, however, it is said, seemed rooted firmly to the spot by some invisible agency, and the addition of other two, and afterwards four, horses to the first pair was insufficient to move it.

By this time, several of the farm hands had collected and they declare that while the struggle with the waggon was in progress the farm foreman, sitting in a wheelbarrow, was brought up, at breakneck speed, by some unseen hands.

The sight of their foreman being wheeled along, apparently by nobody, in a wheelbarrow, and at such a speed, proved too much for the already over-wrought nerves of the labourers, who fled in a body, leaving foreman and wheelbarrow, and horses and waggon.

We can see why a witch might be thought to be the invisible tormentor: The wagon frozen in place is a typical witch-prank, as were the dancing brooms and the upsetting of the milk and cream–witches love to interfere with dairy products. What was unexpected and does not, in my experience, fall into the usual patterns of witch (or for that matter, poltergeist) cases, was the zombie hare and the chickens’ broken legs. One article reported that a watch was set on the hen-house and, although no one came near the hen-house, more hens were found with broken legs the next morning. Is there a disorder that mimics broken legs in poultry? Marek’s Disease, perhaps?

And what about that “dead” hare? Was it supposed to be reanimated by the witch, as witches often became hares to scamper about on their evil errands?

It seems as though “bewitched farmhouse” is a misnomer. The manifestations sound like a garden-variety smash-and-grab polt with an incendiary side gig. There is no information on the ages of the children, but the servant is a likely candidate. The dress she wore when burnt was shown to reporters and it was said that she firmly believed that “a witch did it,” although another article said that “The girl asserts that all the reports of strange happenings on the farm are untrue, and that nothing of an uncanny nature has occurred.” Which is what you say when you want to keep your job…

I hoped, but failed, to find more about John Dunn of Grimsby who volunteered to “lay the witch.” Was he a cunning-man or local wizard? Alas, the local press seemed to lose interest after March, 1905; the trail goes cold.  And it will take some time to get over the image of the dead hare re-impaling itself on its hook….