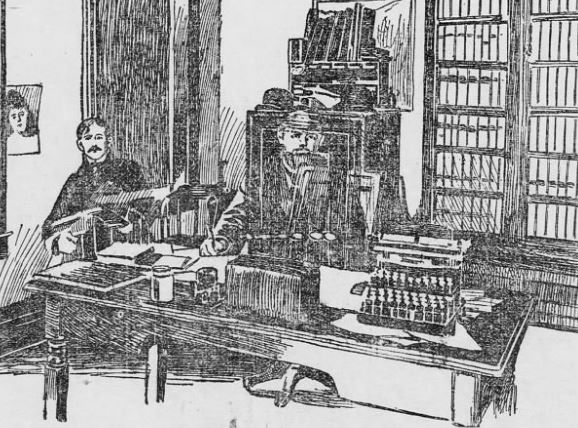 A busy day today, so here is a little photographic mystery from Portsmouth, Ohio. To be clear, the images in this post are drawings of the original photograph, which I have not found. Newspaper printing technology at the time did not allow for quality reproduction of photographs. Drawings were thought to reproduce in a clearer manner than the original photograph.

PHOTOGRAPH TAKEN WITH AN ORDINARY CAMERA Made of W.B. Grice, of Portsmouth, O.,

He Writes a Personal Account of the Phenomenon—Admits He Is Mystified—A Safe and Chair Accidentally Taken Through His Clerk and Himself.

Cincinnati, Sept. 15. One of the most curious of all the mysteries with which nature has puzzled the world has just been brought to light at Portsmouth, O., where furniture has been photographed through human beings in a manner which no one can explain. The facts concerning this strange event are related by the man in whose office it all happened. Here is what he wrote, in response to a request to tell the exact facts concerning the mysterious photograph:

“I was sitting in my office a few days ago when a traveling photographer came in and asked to be permitted to take a flash-light picture. I was very busy at the time, and told the man to go ahead and let me know when he got ready. Then I would look up and let the picture be taken. At that time I was sitting in an office chair which has a cane or rattan back, and was leaning back to see that my body covered the entire portion of the chair against which it rested, with the exception of a corner at the top, on the left side.

“I was directly between the chair and the photographic instrument. There was no possibility of anything being visible but myself. My clerk became interested in what was going on, and placed himself in position. He sat in an ordinary chair, with one knee crossed over the other. He held a bank check on his knee, and it was at such a high position that the book slanted back toward his body, so as to show the bottom of the book to a person looking from the camera could see the bottom of the book.

“After a few minutes the photographer told us he was all ready and I looked at the camera. He lit the flash-light, and there was the usual flare. Then he said it was all over. I had noticed, however, that there were two distinct flares or explosions, and, on inquiring of the photographer, was told that it was caused by his spilling some of the powder on the top of the camera. There is no mistake about the two flares. I noticed them particularly.

“The next day the photographer sent me one of the pictures he had taken, the very picture that I send with this letter. What was my astonishment to see that the backs of the chairs in which we were sitting and articles of furniture that were also located back of us in the room showed distinctly through our bodies in the picture. I thought at first that I must have some affection of vision, but the more I looked, the more I saw that I was all right, and it was the picture that was strange. The safe was particularly in evidence.

“I have given the matter considerable thought but am as far from the solution of the problem as I ever was. I know that when the picture was taken my clerk and myself were facing the camera directly, our backs were against our chairs. Yet the portion of the chairs that appears in the picture was the same portion against which our backs rested when we were facing the instrument, and not the parts that could be seen at all. The picture shows the entire back of the chair in which my clerk was sitting and the entire square of the bank check book which he held on his knee. What mystifies me is that, in order to do this, the picture must have been taken right through his body to show the chair, and through his knee to show the entire square of the check book.

“There was an iron safe about five feet in the rear of me, in line with the camera, and the panel work across its front seems to pass across my face. Perhaps I should say in the picture of myself, for from this picture one cannot say which of the two, the safe or myself, is in front, so completely are we blended.

OUTLINE OF A LEG

“If you will look closely at the picture, you will notice a shadow-like line across the paper lying on the table in front of me, that seems to be the outline of my leg, which was under the table. Then along down the back of the chair you can see the edge of the cutaway coat I was wearing at the time. Both bookcases shown in the photograph have glass doors, and the looking glass in the back room is a small shaving glass, or triplicate mirror, fastened together with hinges, each glass being about eight inches square. My recollection now is that the glass was spread wide open. It hung about five feet above the floor of the room.

“From where I was sitting at the time the picture was taken about half of the bookcase in the back room could be seen, and the whole of the mirror. The same statement will apply to the position of Mr. Walters, my clerk. The light that was generated by the flash did not seem to pass through the table or any object in the room, excepting our bodies, and I am not certain that it did that. I do not see, however, how the portions of the chair backs could have possibly been taken in any other way, for our bodies were actually against the portion of the chair backs which were taken. The side of the back of the chairs which came in contact with our backs is the side which appears in the picture, and that, too, with such distinctness that there can be no mistake about it when the picture is carefully examined.

“The day was clear, and the sun was shining brightly in the front windows. The picture was taken about 10 o’clock in the morning. The sun was also shining through the two windows on the east side of the back room, and perhaps reflecting strongly in the looking glass and on the glass front of the book case, as the curtains in that room were dawn only down to the top of the lower sash.

“As will be seen, from the picture I send you, the curtain of the south-west window was drawn close down, while at the middle window the curtain was only down to the lower top of the sash. This lower sash at the time had a picture of William McKinley in it, and on the inside of the entire sash there was tacked gold-colored cheese cloth, so as to give the picture the proper effect from the street. As to the southeast window, I am not positive, but my impression is that the curtain was drawn close down, although my clerk think sit was only drawn down to the top of the lower sash.

“I am confident that the camera with which the picture was taken was in its usual condition and that the same effect could be produced as often as desired with the sun shining as it was on that day, and that a person who would give the subject sufficient thought could readily produce the same effect in other places as well as in my office, as the natural law which applied in this instance would apply in other instances under like conditions, and with as great certainty. To persons who understand the effect of cross lights, it may be that the reason for the photograph would be apparent.

“I have been very definite in my description in so far as I could, so that if any one should not understand the phenomenon and cared to investigate the matter, he might have a basis of action. It is certainly a strange picture, and the more one looks at it the more mystifying it becomes. Reflected or cross lights or anything else than rays passing through our bodies seems an impossibility after examining the picture. Still, I am not willing to admit that I am thin or transparent enough for a picture to be taken through me.” Mr. Grice is one of the leading attorneys of Portsmouth, O., and it was in his law office, 129 West Second street, that this strange photograph was taken. The statement from him given above is in his own words and just as he wrote it.

I’m not much of a photographer and have absolutely no clue about the mechanisms of this sort of thing. Is this a simple case of unnoticed double exposure?  Grice seems to say that they did not move while the photographer was in the office; a clear view of the safe would seem to have been required for a double exposure. Are the two flares significant in this regard? I expect full transparency. Chriswoodyard8 AT gmail.com