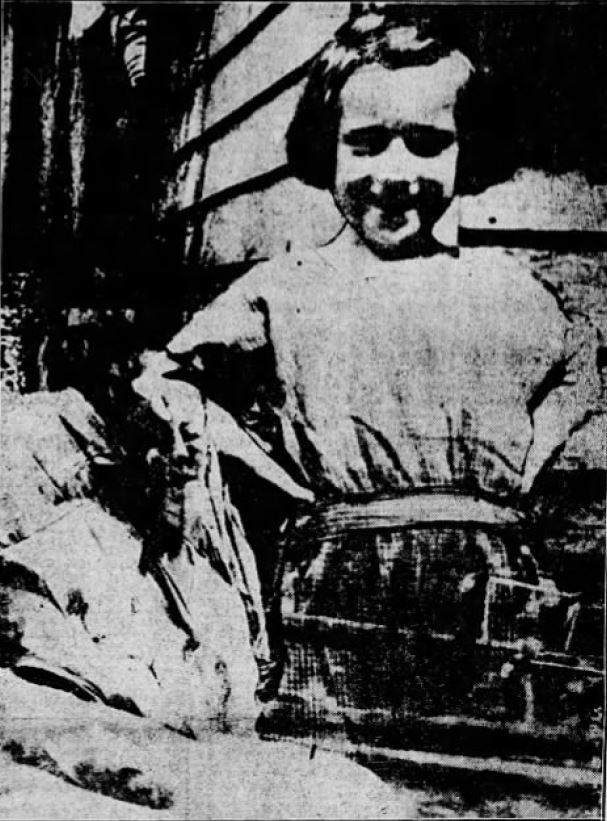 A Photograph of Uncle William The photograph shows little Miss Isabella Haug of Newark, N.J. Her mother took the picture. When the film was developed the bearded figure to the right of the child appeared.

It sounded a simple story of a ghostly photograph.

In connection with Sir Arthur Conan Doyle’s lecture tour comes a “spirit” photo taken in Newark. This is the story told by Mrs. Mary Haug, of 329 South Tenth street, Newark:

With a cheap camera she took a picture of her daughter Isabella at a party celebrating Isabella’s fifth birth day on Sept, 6, 1920.

The roll of film was developed and printed at a corner drug store, and the print showed in the lower left hand corner a clear picture of her uncle, William Henry Vreeland, who had been killed in an accident 10 years before.

“His right hand had been torn off by a machine–you will notice that the right hand is missing in the picture,” she said, “and that he is propped up on pillows very much as he was in the city hospital before he died. I could see that it was my uncle–he had the same kind of beard.

“Not believing my own eyes, I took the picture to my aunt, his widow, Mrs. Mary Vreeland, who lives at 73 Finlay place. As soon as she saw the picture, she recognized it as her husband.

“My daughter was born with a double veil over her eyes. At the age of 3 she showed that she could see what others could not see.”

The above photo shows little Miss Isabella. Haug. Note the bearded figure at the left.

I’m useless when analysing paranormal photographs, but disparities in size/scale are often seen when there is a “spirit extra.” Does it look as though someone added Uncle William’s photograph when they printed the snapshot? Was Isabella’s image a double exposure?–it looks as though the house siding shows through her lower body. Was a final photograph taken when Uncle William was dying in hospital? No one seems to have asked the little girl, born with the seer’s caul over her eyes, if she saw anything while being photographed.

But answers to some of these questions accompanied by, if I may say so, suggestive details were found in a longer article in the New York Herald.

Mrs. Mary Haug of 329 South Tenth street, Newark, doesn’t attempt to explain it. All she can do is to show any who are anxious a picture she took of her daughter Isabella on the latter’s fifth birthday, September 5, 1920.

The photograph is as remarkable as any of those taken by the celebrated spook photographer. William Hope of Crewe. England, and exhibited to a palpitating audience in Carnegie Hall last Friday night by Sir Arthur Conan Doyle.

And naturally little Isabella cannot explain it. She took to the darkest corner of the Haug cellar yesterday when reporters tried to have a word with her. E. J. Dingwall of the American Society of Psychical Research has asked Mrs. Haug to let him investigate. investigate.

Mrs. Haug, herself a spiritualist, says that all the scientists in the world can investigate if they have a mind to. She says that she, like Sir Arthur Conan Doyle and Sir Oliver Lodge, looks on the photograph as a thing not to be explained, but merely accepted.

The camera with which the photograph was taken cost Harry Schroeder of 23 Somerset street, Newark, just $2. He gave it to Isabella as a birthday present. Likewise he gave the child two rolls of films. Mrs. Haug says she posed Isabella on the front porch. The picture was snapped, the rest of the roll consumed in other snaps and the whole strip of film taken to a neighborhood drug store for developing and printing. She then explained:

“There was but one exposure of Isabella and here is the picture.” Isabella is shown standing on the porch, arms akimbo and a broad grin on her youthful face. The print suggests double exposure so far as the figure of Isabella is concerned, for the child appears  transparent. The clapboards of the house are seen through her small body. In the lower left hand corner of the photograph and occupying about a quarter of the picture area is a clear picture of a bearded man, clad in the ordinary night shirt of the hospital wardrobe, propped up in a hospital bed. The man appears to be about 60 years old. The right sleeve of his night shirt is rolled back, exposing the bandaged stump of an arm. Mrs. Haug said:

“That man is my uncle, William Henry Vreeland, who died ten years ago–three years before Isabella was born. Moreover, . he died in that very bed you see him in there. That bed was in the Clay Hospital here in Newark. A couple of weeks before he died he had his hand and wrist mangled in a machine. He was taken to the City Hospital, where the hand and wrist were amputated. He died of gangrene.

“Three days before he died 1 saw him in the hospital in just that position–propped up in bed and the bandaged arm resting on a pillow. I was only about twenty years old then and I remember being rather faint when I saw that bandaged stump. For a long time I carried the mental picture of my uncle in my mind.

“Naturally we took no photographs of him as he lay there in bed. Furthermore this small camera was given to us less than two years ago. That my uncle’s photograph could have been on films that were never opened until we got the camera is, of course, an absurdity.  As soon as I received the prints I took them to my uncle’s widow. Mrs. Mary Vreeland of 73 Finlay place. She recognized her dead husband at once.”

Mrs. Haug explained that she had not made known the existence of this picture until Sir Arthur Conan Doyle’s English pictures created such a furor. Then she resolved to let the public know about it. She said she sought the opinion of John Hill, minister of the Spiritualistic Church of Advanced Thought. 123 West Ninety-fourth street. Mr. Hill said last night:

“The answer is simple. I consider this picture the most remarkable of its sort on record. It is far more convincing than any taken by William Hope.”

Mr. Hill said the child is a real psychic. Mrs. Haug cited an afternoon when Isabella entered the house leading an imaginary child and said to her mother:

“See this little girl? I like her as a playmate.”

“But there is no little girl there,” Mrs. Haug says she replied.

“Oh yes. there is. She has a very sore throat and must go to heaven tonight. Her name is the same as mine.”

The next day, said Mrs. Haug, Isabella’s cousin Isabella, died in Cleveland of diphtheria. The Haugs said they had not known that the child in Cleveland had been ill.

“I have been a Spiritualist for fifteen years.” said Mrs. Haug, “but have no psychic powers whatever. I have never had any. Isabella’s father is a non-believer in Spiritualism and his scoffing seemed to drive away whatever powers the child had. However, Dr. Elisabeth Madison of Orange has examined Isabella. She says such powers as the child may have had will return.

In another New York paper, Mrs. Haug waxed lyrical and told how Isabella had visions of Harry Schroeder, the camera’s donor, “just after the armistice.”

“I wish I could tell you what that picture meant to me. It meant new soul life, new happiness. I do not know much about spiritualism as such, but I feel that the secret of the world is in it. I would not sell that little camera for $1,000,000.

“My daughter was born with a double veil over her eyes. At the age of three she showed that she could see what others could not see. She told us one day, just after the armistice, that our friend, Harry Schroeder, who lives at 23 Somerset Street, was changing a ring from one hand to the other. When he came back he told us that he had done so. Isabella told us the day and hour he was going to arrive in this country from France, and it came true.

“At first we scolded her for it, and probably interrupted her communication with the spirit world. It may take years for it to come back with full force. She is very nervous and we have never been able to keep her in school.”

Mrs. Haug said that no other pictures were taken with the camera.

There seems to have been some marital friction over Mrs. Haug’s spiritualist beliefs; was the “new soul life, new happiness” because she thought she could convince her husband of the Truth?  Probably not, since the photo was taken in 1920 and not revealed until 1922, when he was described as still scoffing.

The date and price would suggest that the camera was a Brownie Number 2.  How tamper-proof were these cameras?

Although I haven’t found an account of the original accident or his obituary, William H. Vreeland died 15 November 1912 and is buried at Rosedale Cemetery in Orange, New Jersey.