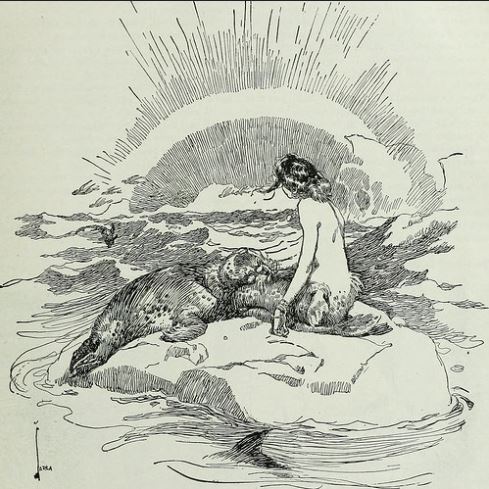 An Antarctic Mermaid with a seal on a ice floe, watching the Northern Lights.

According to Encyclopaedia Britannica, James Weddell was a “British explorer and seal hunter who set a record for navigation into the Antarctic and for whom the Weddell Sea is named.”  Thrilling though his navigational exploits were to the British nation, his book, subtitled Containing an examination of the Antarctic Sea To the Seventh-Fourth Degree of Latitude and a Visit to Tierra Del Fuego, with a particular account of the inhabitants to which is added, much useful information on the coasting navigation of Cape Horn, and the Adjacent Lands, with Charts of Harbours, &c, reads like a log book, giving copious details of latitude and longitude such as:

On the 15th at noon our latitude observed was 68° 44′, by account 69°; this difference of 16 miles in the latitude with easting given by chronometers, makes a current in 4 days of N. 53° E. 27 miles. In the forenoon, with the ship’s head S. by W., I took a set of azimuths, which to my great astonishment gave the variation but 1° 20′ east; in the afternoon I took a second set, which gave 4° 58′. As I had taken great pains in making the observations, and the instruments were good, however unaccountable this great difference was, I could not do otherwise than abide by the result.

All sound information and no doubt riveting to his fellow mariners and to navigation aficionados, but scarcely a page-turner. One seeks in vain for colorful anecdotes or lively commentary. Even his descriptions of the Fuegian peoples he regarded with benevolent disapproval are lackluster. However, Weddell redeems himself with one notable Fortean report: the incident of the green-haired mermaid.

I have mentioned that the only species of seal found on these islands, is that possessing the fur; but a creature was reported to have been seen by one of my crew, which, according to his account of it, must have been a non-descript.

A boat’s crew were employed on Hall Island, and the man who saw this animal was left on one side of the island to take care of some produce, while the officers and the rest of the crew were engaged on the other side.

The sailor had gone to bed, and about 10 o’clock he heard a noise resembling human cries, and as day-light, in these latitudes, never disappears at this season, he rose, and looked around, but on seeing no person, he returned to bed; presently he heard the noise again, and rose a second time, but still saw nothing. Conceiving, however, the possibility of a boat being upset, and that some of the crew might be clinging to some detached rocks, he walked along the beach a few steps, and heard the noise more distinctly, but in a musical strain.

On searching around he saw an object lying on a rock, a dozen yards from the shore, at which he was somewhat frightened. The face and shoulders appeared of human form, and of a reddish colour; over the shoulders hung long green hair; the tail resembled that of the seal, but the extremities of the arms he could not see distinctly. The creature continued to make a musical noise while he gazed about two minutes, and on perceiving him it disappeared in an instant. Immediately when the man saw his officer, he told this wild tale, the truth of which was, of course, doubted; but to add weight to his testimony, (being a catholic) he made a cross on the sand, which he kissed in form of making oath to the truth of his statement.

When the story was told me, I ridiculed it; but by way of diversion, I sent for the sailor who saw this non-descript into the cabin, and questioned him respecting it. He told me the story as I have related it, and in so clear and positive a manner, making oath as to the truth, that I concluded he must really have seen the animal he described, or that it must have been the effects of a disturbed imagination.

Mary writes in with this pertinent observation:

All I can say is that if the commander commissioned the illustration of the mermaid and the seal in the Antarctic admiring the NORTHERN lights, his soundings weren’t the only thing that were off. Maybe, like Sir John Franklin, he was coming to grief because he just really wasn’t all that able a seaman ! Or may be it WAS aliens !

My apologies to Mary for the confusion–the illustration is a much later one. I was just happy to find a seal, a mermaid, and an ice-floe!

I read your article “AN ANTARCTIC MERMAID” with some interest but the line about sea otters was interesting as they are only found in the northern pacific from California thru the Aleutian island and Asiatic Russia. There is a ” A MARINE OTTER” that is found on the west coast of south America, but it is the smallest marine mammal in the world. Average with is 6 lbs and about 44 inches long less tail. So little is known abut it they aren’t even sure what it eats.

This is why I am a mermaid historian rather than a marine zoologist! Thanks, Lem!