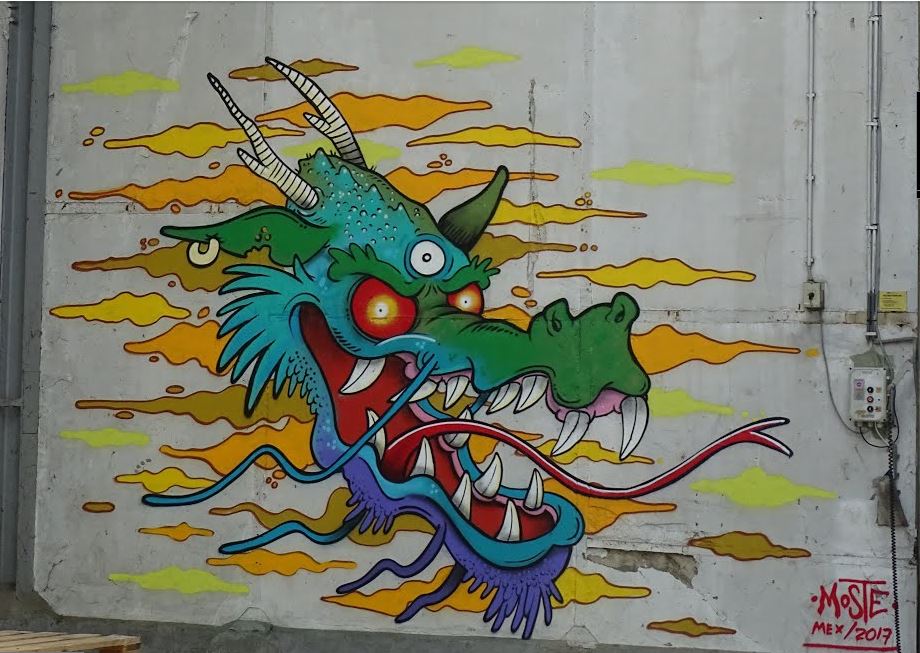 Outrunning the Dragon Moste 2017 Kiss of the Dragon 2 https://artsandculture.google.com/asset/moste-2017-dragon-kiss-2/LAGmLIfxzN8IkQ

This summer has simply gone by in a flash. I feel that I never paid the proper homage to the traditional  Silly Season when tales of lake monsters and sea serpents slithered through the columns of small-town newspapers. I hope to make amends for missing this Fortean rite of Summer with a story of a man who

THOUGHT HE SAW A MONSTER DRAGON

My story may not be properly classed as a story of a ghost, but no ghost ever gave any one a greater fright than was occasioned in this case. In the summer of 1885 I was prospecting in the country east of Hailey. My camp was pitched near the top of a ridge and close by a trail leading across country toward Lost river. One evening as I was sitting by my tent as the shades of night were gathering my ear caught a sound like that of a stampeded horse thundering over the trail. In a moment I saw a man running down toward me at a rate of which I did not think any human being capable. He did not notice me but rused passed [sic] like a flash. His face was distorted by fright and he kept looking back as he fairly galloped along. Behind him was something like a cloud of dust raised by his whirlwind speed, and it seemed to follow him along like a living thing. It was an uncanny sight and it made me nervous during the entire night, but the incident remained a mystery for several days.

I then had occasion to go down to a little place called Era. There I learned from Judge Waldron the story of the race made by the terrified man. The latter was a resident of Hailey and was a character from about town being famed as a man who regularly drank more whisky than any other three men in the place. He had started from Hailey on the evening of the run, and started running. He ran all the way to Era, some 70 miles, making the distance by daylight, breaking all records for long-distance runs in the mountains.

Judge Waldron had just risen when the man burst into his place shouting for protection. Worn out by his exertion, he was scarcely able to tell what had occurred. Then he narrated that while walking in the outskirts of Hailey toward evening he looked over his shoulder and saw a dragon 40 feet long approaching him. With a bound he started to run; the dragon did likewise. He took the trail up the gulch east of Hailey and the dragon followed his example, thundering along close at his heels. He ran faster but the horrid thing kept close and seemed to be ready to swallow him every moment, but by superhuman effort he managed to keep just out of reach. So the chase continued. Every time the man looked back he hoped to find the monster had fallen behind but he was always almost within reaching distance.

After I heard the explanation of what I had seen as I sat by my tent, I began to feel that the streak following the flying man had the form of a monster of some kind, and as the years have passed the impression has grown more and more firmly fixed in my mind. I never camped in that locality again; I did not even go back for my camp outfit, and there is nothing on earth that would induce me to spend a night among those hills again.

It certainly sounds like a landlocked version of a Silly Season sea serpent, although published out of season in connection with an editorial request for ghost stories. What do you make of it? I have not located any more information on the author or on Judge Waldron, although there was a Judge G.P. Waldron frequently mentioned in the Montana newspapers of the 1890s. (Surely judges did not stray over state borders?)

Dragon tales were perhaps the least popular with Silly Season journalists, who preferred Wild Men, Sea Serpents, and monster snakes with a side order of giant, club-wielding ghosts.

The tone and the crack about the inebriate’s whisky consumption (not to mention the speed record note) is typical of tall tales of monsters, yet the narrator’s admission of fear and his retrospective conviction that it was a monster are less commonly found in the genre. These Silly Season tales usually end with some tediously deadpan version of “And the sea serpent was never seen again–a circumstance attributed to the Temperance Pledge taken by those who witnessed it.”  We have a nod to the Temperance trope, but why did Mr. Henderson not do the thing properly and describe a hideous, multi-colored monster with horns and scales instead of the understated dust-dragon?

Thoughts? Run them by me. chriswoodyard8 AT gmail.com

Other Silly Season stories: The Republican River Monster, Notes on American Dragons, A Query of What-is-Its, Does the Sea Serpent Look like an Art Nouveau Oar-fish? and SNAIX.