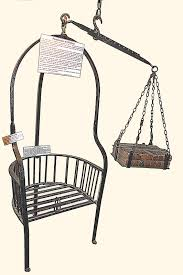 Bagging a Witch in Ohio A witch-weighing chair from the Museum of Witchcraft, Boscastle, Cornwall

I recently posted about the survival of witch-belief in 19th-century Virginia. Today’s post returns to a similar theme: Anti-witch remedies and witch-tests in early 19th-century Ohio. This story–half dire description of lunacy and half Monty Python sketch–comes from the village of Bethel in Clermont County. According to a local history site, the events below took place c. 1805, just two years after Ohio became the 17th state.

There were also living, in the village [of Bethel] at this time a few families not so highly favored in mental ability, and who unfortunately believed in the presence and power of evil spirits and witches. Of this latter class are remembered the Evans and Hildebrand families, the former residing on the lot at present occupied by Dr. McLain, the latter on the Dr. William Ellsberry lot. It appears the Hildebrand family especially imagined itself under the influence of witches, the older daughters, who were young women grown, giving unmistakable evidence that they were possessed by some evil spirits. On the approach of night they would scream, and at times become perfectly frantic from fright of the hideous objects which they professed to see, and which maintained such a spell over them that they were unfitted for their duties. Various devices were resorted to in order to exorcise these spirits.

A large bag of linsey-woolsey was made and held by a member of the family, while the other members went through some ceremony, at the conclusion of which it was supposed the witch had been forced to take refuge in the bag, which was quickly closed, and after being firmly tied was carefully laid on the porch of the house, where it was cut into a thousand pieces with a sharp axe. The fragments were then gathered together and burned; and one would surely supposed that if the witch had perchance escaped death while the bag which confined it was cut into fine shreds, the fire would put an end to its existence.

Not so, however; the influence over the young women remained undispelled, and the witches continued to revel in the Hildebrand house. Soon the spirits assumed a material form, and appeared, as the young women averred, in the person of their neighbour, Nancy Evans; and from this time on it was not long until they believed that Nancy Evans herself was the witch, and that all their troubles had been caused by that unfortunate woman. She was shunned, and all intercourse with the family avoided; but the trouble remained.

At last the justice of the peace was importuned to take the matter in hand, and if the woman, Nancy Evans, were really a witch, expel her from the presence of the afflicted family. The statutes of the Territory had made no provision for a case of this nature, the legislators evidently thinking that witchcraft would not flourish on Ohio soil; so the case had to be disposed of in another way. A tradition prevailed that if a witch were weighed against the Holy Writ, so great would be the overpowering influence of the Bible that the witch would be compelled to tip the beam.

Accordingly, a rude pair of scales was constructed to decide this momentous matter, and all the interested parties having been called, as well as the neighbors, who were to witness the propriety of the proceedings, Nancy Evans was placed on one end of the scales and the Bible on the other, when she was thus adjured: “Nancy Evans, thou art weighed against the Bible, to try thee against all witchcraftry and diabolical practices.”

This being done in the name of the law, and with a profound respect for the Word of God, seems to have had a solemn and conclusive effect. Nancy Evans was heavier, very much heavier, than the book, and was thenceforth relieved from all suspicion of being more than a simple old woman, who willingly submitted to this novel process in order to bring peace of mind to her neighbors, whom she sincerely pitied.

In the course of a few years the Evans family removed to Brown County, where the old lady died respected by all who knew her. The Hildebrand family also removed, and since their departure witches have no more flourished at Bethel than at any other place, and the Village became noted for the general intelligence of its inhabitants and the neighbourly relations which existed among them, and continue to this day.

Weighing witches was a test imported from Europe and the British Isles. See this post from Dr Beachcombing about weighing witches and where in the Netherlands you can go today to be weighed and certified as a non-witch. (Presuming that you’re not…)

As for bagging a witch and then cutting the bag to pieces, I’ve tried unsuccessfully to find other examples of this intriguing witch-disposal technique. It may have been something unique to the eccentric Hildebrand family. The closest analogy I can find is the practice of conjuring an evil spirit into a bottle to “lay” it and even then the bottle is usually thrown into a body of water to neutralize it, rather than destroyed. There are also various folktales about the Devil being lured into some species of container, like Sir John Shome conjuring him into a boot or the miller who tricked the Devil into a flour-sack and tied him to the mill-wheel.

We have to wonder what ailed the Hildebrand daughters: milk from cows who had eaten poisonous plants, insect- or water-borne disease, or mental illness?  Nancy Evans moved to neighboring Brown County where, in 1876 the Ohio equivalent of a Pow-wow Doctor, one Dr. Schilling, attempted to “cast out witches” for a “respectable farmer” for $50. He was also on the spot, performing exorcisms at the Brown County Academy run by the Ursuline Sisters when there was an outbreak of (take your pick) spirit possession with chorea or, as the physicians called it, malaria.

Any other examples of sacking ’em up? Lure into a bag and send to Chriswoodyard8 AT gmail.com.

[The story above is an excerpt from my book The Headless Horror: Strange and Ghostly Ohio Tales, a collection of weird, ghostly, and Fortean stories from the past.]

See other posts under the “Witches” subject tab including The Witch Wreath at the Museum, about fatal feather charms.