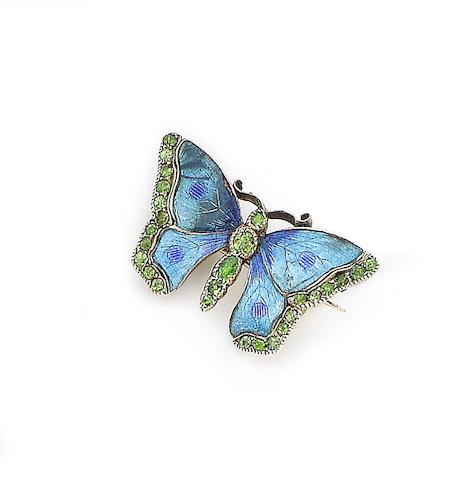 Butterflies, so abundant this time of year, have always been a symbol of the soul.  In this story of a luminous phantom butterfly, it seems as though that ancient idea has been unthinkingly grafted onto a Buddhist image. But is there any actual precedent in Buddhist art and theology?

After several years spent in India, my husband brought home, among other presents, a small wooden statue of Budda. It was placed on a table in the drawing-room. One night during a thunderstorm I entered the room to close the windows. All was dark, but for a luminous object over the little table. On approaching it, I perceived a beautiful large butterfly, perched on the head of Budda. When I tried to examine it, it vanished, and all my search for the pretty insect the next day was in vain. Soon after, we left our country-house to live in a London flat. One night in winter, when I came home at twelve o’clock from the theatre and entered the dark drawing-room, again I found the luminous butterfly on the head of Buda, and, again, it vanished at my approach. I am the member of a very sceptical family and told my story to nobody, but carefully examined the statue. A hidden drawer was found and when opened, the dry husk of a caterpillar fell out. Every statue of Budda has enclosed a living being to give a soul to the image.

I’m not a scholar of Eastern religions, but the notion that a “living being” was enclosed in each Buddha statue to give it a “soul,” is new to me. Can anyone provide more examples or primary sources that support this? Or was this simply a case of mistaking a wood-worm corpse for evidence of a religious custom or conflating it with the pretty image of soul as butterfly?

chriswoodyard8 AT gmail.com, who wonders if the caterpillar dreamt that it was Buddha or if the Buddha dreamt it was a caterpillar?

Mary writes: with a good point:

Don’t know that much about Buddhism myself, but it seems to embody a reverence for life that would preclude imprisoning any living thing to lend a soul to a statue. The statues themselves seem to have attributes attributed to them on the power of The Buddha alone. But the little drawer is suggestive – it must have had a purpose. But you would think there would be lots of stories of mysterious objects found in the drawers if there was supposed to be one in every statue. Food for thought !

Thanks, Mary! I wonder if the drawer was for a relic or a sutra.

Mark sent this wealth of fascinating information and suggests a different origin for the statue. Many thanks, Mark!

I wanted to send you a quick email about some information I came across as I looked around the topic of the statue with a butterfly hidden inside. That’s an excellent find, first time I heard about this at all, and it’s really interesting!

From what I found, the lady offering her report points out a fascinating (and real) practice, even though she may have been incorrect about the ultimate provenance of the statue. As James Robson writes in ‘The Buddhist Image Inside-Out: On the Placing of Objects Inside Statues in East Asia’ (in Tansen Sen, ed., 2014, ‘Buddhism Accross Asia: Networks of Material, Intellectual and Cultural Exchange’, Volume I. Singapore, Manohar: ISEAS Publishing), there are South and South Asian statues which would have small compartments for storing texts, relics, medicinal herbs. However, it seems that Chinese folk statues are unique, in that some of them would indeed contain also insencts, placed there as part of animation ritual (not unique globally, just in the geographical limits we’re talking about here). Those would be created and used in the context of Chinese Traditional/Folk Religion(s), rather than Buddhism, and we have reports of such statues from Christian missionaries eager take them from new Christian converts (British interest and involvement in China being considerable at the time) and ship them off to England, to end up in the Missionary Society Museum or some other ‘art detention centre’.

The boundaries between religions as lived cultural networks are always a bit porous, and more so in Asia than what we’re used to in the North Atlantic world (never mind the fact that at the time of the report, there were certainly more religions in the mix over there), so it’s hard to pronounce on this with any certainty. That being said, I think that a more likely story here therefore is that this was a Chinese Traditional/Folk Religious statue, animated by the use of a butterfly – since religious statues are, historically/globally, often subject to (‘magico-‘)religious rituals to ensure that the being depicted descends into the material object, the statue is enlivened, etc. After some use, perhaps it could have been given away by a Chinese family interacting with British missionaries, and made its way westward to British India, where it was purchased by the husband of the lady. Westerners are still often confused about exactly who is depicted in Asian sacred art (e.g. the Buddha vs Budai), so it’s understandable that the couple may have assumed this was an Indian Buddhist piece.

Here are some relevant entries from Robson’s bibliography:

—————-. “Conceptualizing Gods through Statues: A Study of Personification and

Localization in Taiwan.” Comparative Studies in Society and History 50, no. 2 (April

(On a different note, from a ‘paranormalist’ point of view it’s very interesting that the account suggests the ritual of animation seems not to have worked – the lady experienced not an enlivened, supernaturally active statue, as this supernatural animation would have been the intent behind putting the butterfly there in the first place, but rather a ghost of the butterfly itself. No bibliography entries for this sort of thing, I suppose!)

All of this is based, of course, on the hypothetical that the caterpillar didn’t just find itself there without any human intent, just because it was looking for somewhere to hibernate or something. Could be an Indian Buddhist statue with a compartment where a caterpillar just randomly crawled in. I’m a Religious Studies graduate, not a zoologist, so I’m gonna go with my long-winded theory over some sane and disenchanting zoological story anyway!