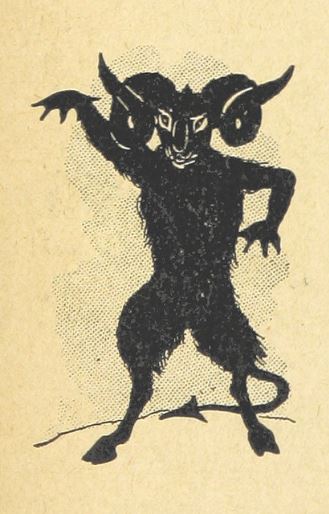 Like Slender Man and Shadow-men, the Goat-man seems to be an up-and-coming creature in the paranormal world. See, for example, this recent book, Goatman: Flesh or Folklore?  And this excellent post on a Goatman sighting in Maine.

Following in Theo Paijman’s illustrious hoof-prints, I also wrote about some goat-like fiery devils in Bracken County Kentucky in The Ghost Wore Black: Ghastly Tales from the Past, with a nod to the legendary Goat Man of Pope Lick.

Today we look at two nineteenth-century accounts of goat-entities, related by Violet Tweedale, who gave us the story about the Greek centaurs.

I remember Lilian, Countess of Cromartie, telling me of a strange incident that once happened to her.

She was walking alone one bright summer morning in Windsor Great Park. Suddenly she saw an amazing looking creature loping slowly towards her. It resembled an enormous hare. That is to say, its legs and head were those of a hare, but its size was that of a goat and its horned head was half-goat, half-hare. This creature, loping without any fear, and with a hare’s movement straight towards her, caused her to pause. She stood still and breathlessly waited its approach. It passed quite close to her, and as it did so she struck at it with her parasol. Instantly it disappeared.

[Here we find the story of a troop of centaurs frightening an aristocratic couple on holiday in Greece. With her usual spot of insouciant name-dropping, the author goes on:]

There were several people in the room whilst the Grand Duchess was unfolding, in the most impressive manner, this strange event. [the centaur tale] Amongst them was the first Lady Henry Grosvenor, born Miss Erskine Wemyss of Wemyss Castle.

She told us that when a child of seven years old, she had passed through some minutes of such absolute terror, that as long as she lived she would never forget the experience.

With another child, and a nurse in attendance, she was playing one summer morning out of doors. After a little while the nurse rose from her seat amongst the heather, and wandered away a short distance, out of sight but not out of hearing.

A few moments after the two little girls heard some bushes behind them rustling, and a huge creature, half-goat, half-man, emerged and leisurely crossing the road in front of them plunged into the woods beyond and was lost to sight. Both children were thrown into a paroxysm of terror, and screamed loudly. The nurse ran back to them, and when told what was the matter scolded them for their foolish fancies. No such animal existed, such as they described, an animal much bigger than a goat, that walked upright, and had but two legs, and two hoofs, that was covered with shaggy brown hair from the waist downward, and had the smooth skin of a man from the waist upward!

The nurse bade them come home at once, and as they gained the road Miss Wemyss pointed down into the dust. Clearly defined was the track of a two-hoofed creature that had crossed at that spot. The nurse stared for a moment or two, then with one accord they all ran. She never took her charges near that spot again.

Lady Henry said that the memory of that experience was so firmly grafted on her mind that she could always recall with perfect clarity the exact appearance of this appalling creature. In after years, when grown up, she realized from pictures that what she had seen was a Faun or Satyr. Such pictures or statues always sent a thrill of horror through her. She attributed this apparition to the fact that she and her companion were playing close to the site of a Roman camp, and the road was an old Roman road.

The whole scene stood out in brilliant light as a picture before her, whenever she thought of it, which she very often did. She never mentioned it to any one, as she felt that no one would believe her. She could always smell again the scent of summer, and the odor of pine trees, and hear the trickling of water from a tiny stream. She could always see a wide, white road, ribbon-like stretching away to the horizon. Then, suddenly, she and her young companion stood face to face with a presence, a hideous, unspeakable shape, that was neither man nor beast.

She believed that there was a real world beyond the glamour and vision of our ordinary senses, and sometimes this veil was lifted for a few seconds. She believed that much of the tradition of mythical creatures represented solid fact, and that it was possible there were failures of creation still extant. Again, might there not be races fallen out of evolution, but retaining as a survival certain powers that to us appear miraculous.

Aside from fiction (Saki’s brilliant The Music on the Hill comes to mind; the decades from roughly 1890 to 1920 were a hey-day of Pan-ic literature), actual reports of satyrs/goat-men are quite rare. The panic of the children and their nurse is the eponymous reaction we’d expect when encountering the Great God Pan. Not quite the Love and Awe reaction felt by Mole and Rat in “The Piper at the Gates of Dawn” chapter of The Wind in the Willows, although Kenneth Grahame writes:

The Mole ran quickly to comfort the little animal; but Rat, lingering, looked long and doubtfully at certain hoof-marks deep in the sward.

‘Some—great—animal—has been here,’ he murmured slowly and thoughtfully; and stood musing, musing; his mind strangely stirred.

The Wind in the Willows was published in 1908. Possibly it influenced Tweedale’s description, or the narrator’s recollections.

Other Goat Men? They, along with Dog-men, Wolf-men, and Slender-men, seem to be on the prowl.  chriswoodyard8 AT gmail.com