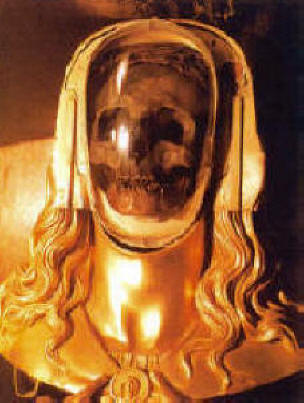 Heads of Their Dead.

Heads Stored in the Churches

Some very quaint curiosities of medieval antiquity belong to the traditions and customs of the monastic orders in different countries of Europe. The Capuchins, a branch of the decaying Franciscan Order, came into existence as late as 1525, and derived their title from the Italian name of a large cowl attached to the frock of rough frieze at the back of the neck. They never amassed great wealth or lived in such ease and luxury as some other friars had done; and the traveler in Italy at the present day will find them not unpopular in rural districts. Visitors to Rome are often tempted—it is a matter of taste—to inspect a ghastly display at the Church of the Capuchini. The mummies of deceased priors and the skulls of a multitude of defunct brethren of that community are ranged along the walls. It may have been only the fantastic whim of a gloomy-minded superior at a particular date which established this dismal fashion of commemorating the dead by so questionable a decoration, but the same kind of exhibition is presented in Sicily, at the Capuchins’ Convent of Monreale, a few miles from Palermo. There is a city in the heart of a civilized country where every year the heads of many persons are cut off and placed in little boxes. It seems like a barbarous custom, even though the people have long been dead when they are decapitated. But the people of that city, even though they

So different from any in the world, see nothing out of the way in it, and in doing as they do believe that they show a deeper and more lasting love for the departed than those who simply bury their dead, erect a tombstone, and then in many instances forget all about them.

The ghastly custom has been in vogue for more than a hundred years in the town of Annecy, which is in the Department of Haute Savoie, in the south of France. It is one of the most picturesque cities of Lower France and nestled at the foot of the Lake of Annecy, within a short distance of Geneva. The surrounding country is made up of scenery of the most marvelous beauty, while the lake, which is nine miles long and only two in breadth, is never ruffled by storms and presents always a mirror-like surface. Thousands of tourists every year visit the town to sail upon the celebrated lake, 1,400 feet above the level of the sea.

But of the many who visit the place and who look with great interest at the church in which the relics of St. Francis de Sales are preserved, at the old castle which was formerly the residence of the Counts of Geneva, and at the nearby iron mines, there are few who know anything of those heads which have been accumulating these many years. For the people have been held up to public scorn before now, and they do not care to talk with strangers about their custom, which is usually misunderstood.

These people bury their dead in the ordinary way, but after the lapse of a few years, when the bodies are reduced to dust, the bones are dug up with ceremonies similar to those under which they are buried. All relatives and friends

And are present when the skull is separated from the other bones. These second ceremonies at the grave over, the cortege moves on, preceded by a priest with the skull, to the church in which the skull is finally placed.

In the early days this receptacle was merely a wooden box, roughly made, punctured with many holes. But as the years have gone by and the custom has grown, many changes have been made in the original idea. Just as in the ordinary burial there are caskets for the rich and for the poor, so, also in Annecy there are the skull receptacles to suit any extravagance or to satisfy the ideas and devotion of mourning widows, of disconsolate parents or of poetic lovers.

In the structure, quite close to the church, which has been erected for the purpose, there are now piled coffins without number of every shape, size and character. Some that have been the work of years are of oak, massive and fantastically carved. Others are made of pure silver and sparkle with rare gems. Some thought of wood, are bound with precious metals, which form a scroll work of unique design and exquisite workmanship. There are others, too, that are made to represent shrines, and some are counterfeit presentments of famous churches of the world, showing tall spires, Gothic archways, windows of stained glass, pillars and passages, all with the greatest regard to perfection of detail.

As a general thing the receptacles are made but for one skull, but some that are intended for an entire family have little compartments, each bearing an engraved plate, where the skulls of the family members will be placed after death. Very often a bereaved husband will have a coffer designed for the skull for a loved wife, with the necessary space left for the reception of a second skull, so that in death as in life they may be near each other.

In each of these boxes there are curious apertures, made in the shape of a heart. Sometimes they appear in the front of a miniature cathedral window, sometimes rudely cut in the side of a wooden box; but they are always there and are supposed to give light and air, though the contents of the coffers have long ceased to require either. Through these openings the grinning skulls can be seen perfectly well, a gray and senseless mass within the shrine. Upon each box there is the inscription which tells whose head it is which lies within, and sometimes tells of the life and death of the owner, his joys and his sorrows. Sometimes, where people are too poor to buy even the plainest sort of a coffer—and it is not considered a disgrace in this respect to be poor—a skull stands in ostentatious humility upon the coffer of some dead neighbor, with nothing but a label stuck upon it to tell whose it is. There are many other skulls standing quite alone and uncovered, from which the covering has

DROPPED AWAY WITH AGE

But these unprotected skulls are looked after just as carefully, and are regarded just as reverently, as those that are inclosed in the richest casket that can be made.

It is a strange sight to see those who mourn their dead, sitting in the dark chamber and holding the skull box in their hand, or kneeling beside it to pray, now and again pressing their lips to the little holes in the side of the coffers.

Just how the curious custom of burial which is used nowhere else in the world except in this little city came to be employed even tradition tells in a confused sort of way. There are some who say that the churchyard, when the town was smaller than it is to-day, became crowded and that the people, desiring all their dead to be interred in one place, decided upon this idea. By others it is said that there was a learned man who once dwelt there who convinced people that the brain, being the seat of reason and the abode of deepest feeling, if there was any thought or consciousness left after death, it must be connected with the head, so the decision was arrived at to have the skulls always where they could be seen.

It is not often that strangers are permitted to look upon these relics of the dead even if they know of their existence, but when they are, the sight is so unusual as to horrify them. But to the good priests who accompanies the visitor it is different. For this priest explains about these silent neighbors to whom he is accustomed that there is less harm in empty skulls than in the living heads and scheming brains of those by whom we are surrounded in life.

A number of skulls were reported to have been sent by the local museum to the Exhibition of Anthropological Sciences at the Universal Exhibition of Paris, a collection of objects contributed by “anthropologists of all nations.” However, there is no way of knowing if they were actually skulls from the church.

I’m reminded of the charnel houses in Germany and Austria like this one at Hallstatt, where denuded skulls are displayed, painted with the names and dates of former owners. Some are also painted with fanciful floral wreaths or with snakes writhing from empty eye sockets.

The article above is a unique and curious report of a long-forgotten custom with what seems to be an  origin story muddled either by the locals or the journalist. But before we lose our heads over it, I must tell you that this is (to the best of my knowledge) a single source story. I can find nothing in the guidebooks or histories and if this story was copied by any other newspapers in the same format, I’ve not found them.

Initially I wondered if it was a misapprehension of a relic storehouse. Yet most relic chambers were swept away by the French Revolution and the article is clear that bodies were still being dug up and the skulls encased in the church.

Are the skulls still on display? Or [shudder] is the custom still followed? Chriswoodyard8 AT gmail.com

Here is a fascinating post about a very similar custom in Brittany.