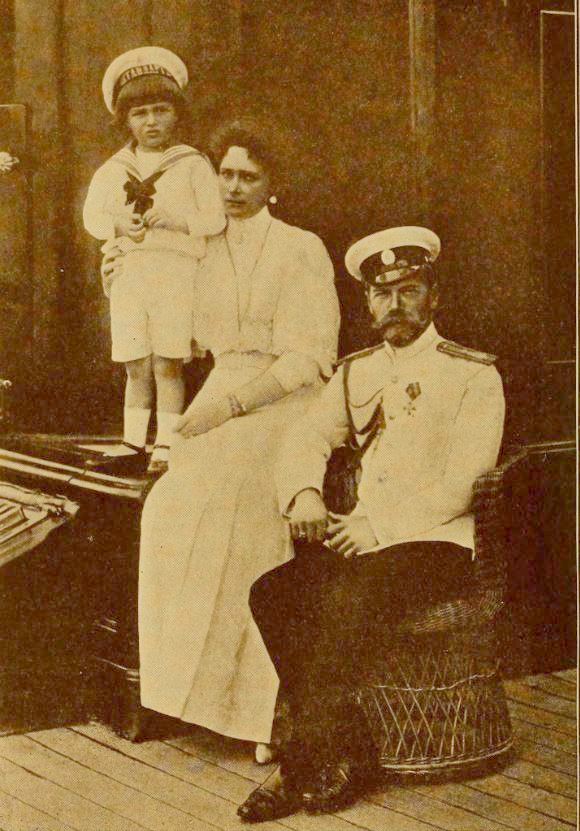 DREAMING OF DEATH FOR THE ROMANOVS

Tsar Nicholas II and his family, as well as some of the family attendants, were murdered in the early hours of the morning of July 17, 1918. While the paranormal literature of the 1890s and 1900s often reported on the horoscopes of the Tsar, who was reported to be weak, yet stubborn, there seem to have been few premonitions of the dreadful death that awaited him and his family at Ekaterinburg. Rasputin’s self-serving prophecy that six months after his death, the monarchy would fall is undoubtedly the most famous.

Less well-known are the following prophetic dreams, which tied the fate of the Imperial family to the massacre of Russian Jews, and which were said to have occurred in 1903 and 1914. They were allegedly published in March of 1918, and are here recalled in the Occult Review for 1922.

STARTLING DREAMS OF THE TSAR AND HIS FAMILY.

Readers of this magazine are aware of the prominent place occupied by dream phenomena in its columns. My attention has been drawn in this connection to a curious story in relation to the disasters which overtook the late Tsar and his family. The record originally appeared in the issue of Truth for March 17, 1918, [Does anyone have an online source for this publication?] but I have permission to reproduce it, and it is probable, I think, that the majority of readers of the Occult Review will not have been cognizant of it. The account in question was communicated by Madame O’Sullivan Beare, widow of the late Lt.-Col. O’Sullivan Beare, who was recently H.M. Consul-General at Rio de Janeiro. Madame O’Sullivan Beare, it may be mentioned, is of a psychic temperament, and has had numerous remarkable experiences in the course of her life.

The first series of dreams alluded to occurred in 1903, and the second in 1914. In the first of these, Madame O’Sullivan Beare was residing in East Africa with her husband, who occupied an official position there. Upon five successive nights during the month of November, 1903 (the 8th to the 12th), she had a series of vivid dreams, the import of which was identical on each occasion. In these dreams she saw the mother of the Tsarina, the late Princess Alice, daughter of Queen Victoria, who, it will be remembered, was married to the Grand Duke of Hesse Darmstadt. Madame O’Sullivan Beare was familiar with her appearance, as she had seen her several times when staying at Darmstadt. In these dreams the Grand Duchess urged her to communicate to the Tsar the information that a son would be born to him within the following year, but warning him that this son would suffer a terrible death unless the Tsar took steps to put a stop to the persecution and massacre of the Jews in the Russian Empire. In these visions she saw the Tsarina kneeling with her arms outstretched and weeping bitterly, while her mother appeared to float round her, though the Tsarina did not seem to be aware of her presence. On awakening, Madame O’Sullivan Beare asked her husband if there was any special news about Russia. Thereupon he handed her a copy of The Times weekly edition, in which she read an account of terrible massacres of the Jews which had recently taken place throughout that country.

Colonel O’Sullivan Beare was much interested, and advised his wife to write to Mr. W. T. Stead, giving an account of the experience. She acted on this suggestion and proposed in her letter that Mr. Stead should himself write to the Tsar, as, being a personal acquaintance, she thought that a letter from him would be more likely to receive attention than her own. Mr. Stead wrote back recommending her to write direct herself, and giving instructions as to how she should address the letter, which she accordingly did, taking care to register the letter, but she received no answer.

It is interesting to note that the fifth of these dreams was experienced on November 12, 1903. Exactly nine calendar months later, August 12, 1904, the Tsarina gave birth to her first and only son. Of these dates there is no doubt, and the original letter from Mr. Stead has been preserved. Whether the Tsar read the letter or not the persecution of the Jews ceased after the birth of his son and heir. After this, a period of ten years elapsed, and in the month of July, 1914, while residing at Richmond, Surrey, Madame O’Sullivan Beare had again a most vivid dream in reference to the Tsar.

A WARNING OF THE WAR.

This was, of course, the period immediately preceding the Great War, when the war clouds, which were so soon to break, were brooding ominously over Europe. This dream was twice repeated, viz. on the 16th and 17th of the month. The Grand Duchess again appeared and implored Madame O’Sullivan Beare to communicate with the Tsar forthwith, and dissuade him from embarking upon the war. She was directed to warn the Tsar that if he did so he would bring upon himself and his family untold perils from violence, incendiarism and revolution. Again the dreamer felt herself compelled to comply with the urgent request of her mysterious visitant, and accordingly sent the following communication to the Tsar:—

May it please your Majesty to remember me, the undersigned, who wrote to your Majesty from East Africa in January, 1904.

In my said letter I mentioned to your Majesty the extraordinary series of dreams which I had upon five consecutive nights, the last one being on November 12, 1903. On that date I wrote to Mr. W. T. Stead (since drowned in the Titanic), telling him of my dream, and desired him to inform your Majesty of the same. He, however, advised me to write direct to your Majesty, as I was told to do in my dreams, that the son and heir who would be born within a year to your Majesties would suffer a horrible death unless your Majesty strenuously prevented the further massacre of the Jews in the Russian Empire. Your Majesty’s son and heir was born exactly nine calendar months from the date of my last dream. I still hold Mr. Stead’s letter to prove my assertion.

The same person has again appeared to me in a dream, telling me to warn your Majesty not to interfere in war. I had this dream on two consecutive nights, viz. upon 16th and 17th inst., but I feared to be considered presumptuous in venturing to write it to your Majesty. The spirit who appears in my dreams is a near relative of her Majesty the Tsarina, and she impressed on me strongly the need to inform your Majesty, at once, of the awful danger to your Majesty’s Imperial Household through Incendiarism, Fire Arms, Revolution and Massacres, and of probable dethronement if your Majesty goes to war.

The letter was again dispatched by registered post, and the post office receipt has been preserved. But again no acknowledgment was received. Before, however, the letter could reach Russia, war had been declared by Germany. It should be added that though Madame O’Sullivan Beare had seen the Tsarina’s mother on various occasions, she had never made her personal acquaintance. Nor is there anything outside her naturally psychic temperament which explains why she should have been chosen as the recipient of the mysterious communication in question.

Possibly Madame O’Sullivan Beare’s association with W.T. Stead suggested precautions such as preserving the post office receipt. Her name appears several times in the Correspondence columns of The Occult Review where she mentions lecturing before a club of psychical research enthusiasts and writing a song called “Love’s Fadeless Rose,” via clairaudience.

Other Romanov death-prophecies or an online source for Truth, 17 March, 1918? Chriswoodyard8 AT gmail.com