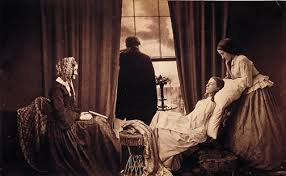 Going noisily mad here with final touches on my upcoming book, The Ghost Wore Black: Ghastly Tales from the Past.  So this will be a very quick post on individuals who inadequately predicted their own deaths. The person who dreamed of his own death was as hoary a psychic chestnut as one could find in the press or in Spiritualist literature. Victims, of course, were always in “apparent” or “perfect” health. This is a typical specimen of a proper premonition:

PREDICTED HIS OWN DEATH
William J. Martin Has a Strange Premonition, Which is Fulfilled.

As William J. Martin sat in his home at 405 Beaver Avenue, Allegheny, at 11 o’clock on Sunday morning in apparent good health he remarked to his sister:

“I don’t know why, but remember I believe I’m going to die at 12 o’clock.”
“Why, what a foolish idea,” said his sister. “You are very far from being in a dying condition. You’re better now than you have been for a good while, and will live for many years yet.”
“It’s not because I feel sick,” replied Mr. Martin, “but I can’t get rid of the idea that I will be dead in less than an hour.”
Half an hour later Mr. Martin fell back in his chair, and after convulsively gasping for breath for a few minutes, expired. Physicians were summoned and pronounced death to have resulted from apoplexy. Mr. Martin’s wife died exactly seven weeks before, and he had often expressed a wish to follow her. His remains were interred yesterday. Macon [GA] Telegraph 19 February 1887: p. 4

On the other hand, the hopeful Miss Windhurst, in the story below, reminds me somewhat of Rev. Harold Camping, formerly of Family Radio, who repeatedly revised his predictions about the Rapture and Christ’s Second Coming.

Believes in Her Dream

Ten miles west of Aurora, Ind., says a correspondent of the Cincinnati Tribune, making her home with her mother on a small farm, lives Lizzie Windhurst, aged thirty-one. Seven years ago she experienced a singular dream which, she claimed, foretold her death. She told her dream to her friends and regarded it as a revelation. As the appointed time was only a few days off she prepared her burial clothes, then took her bed and composedly awaited her dissolution, which she sincerely believed would occur on the fourteenth day of the month. The day dawned and the hours sped by until night ushered it out, and still she was alive. As her anticipated death did not occur her friends endeavored to dissuade her from the idea of dying, but she could not be changed in her opinion, and concluded that the time meant was the 14th of the ensuing month, and she persisted in remaining in bed until that period should arrive. Eighty months have come and gone since the dream, but the girl has kept to her bed, refusing to even leave it for an hour, always asserting that she was soon to die, and wanted to be robed for the grave in the garments which her own hands had prepared for the purpose. Numberless times has Mrs. Cartwright, a kind neighbor, washed and ironed the grave clothes to humor the poor woman. Four times has she prepared new raiment for burial, still her faith has never been shaken in the dream. Her long confinement has at last robbed her of the use of her limbs to any great extent. In other respects the woman is reasonable and intelligent, but on the subject of her strange aberration she will brook no controversy, and her kindred and friends are compelled not to dispute with her on the subject in order to keep her from becoming alarmingly excited. Plain Dealer [Cleveland, OH] 29 January 1899: p. 20

I wish I had the sequel to this story of what the doctors might have described as monomania or hysteria. Today we might diagnose Miss Windhurst with agoraphobia. She falls into an interesting class of 19th century ladies like the “sleeping beauties,” who supposedly slept for months at a time or  Molly Fancher, the “Brooklyn Enigma,” a famous fasting girl, who, although blind, disabled, and bed-bound was said to be able to read, make intricate crafts, and predict the future. Miss Windhurst was really only a pale imitation compared to Molly Fancher’s accomplishments.

Then we have a Spiritualist who was accused of making sure that her prophetic utterances came true:

Suicide by a Spiritualist. A short time since it was stated in the newspapers that a young lady, Miss Hattie A. Eager, of Boston, had died under peculiar circumstance—being a spiritual medium, she had predicted her own death at a certain time, being at the time of the prediction in good health. She was buried with ceremonies peculiar to the spiritualists, and since the event, her case has been mentioned by spiritualists as a clear and convincing proof of the truth of their theory. It has come out now that she committed suicide. The examining physicians say that 20 grains of antimony was found in her stomach after death. Lowell [MA] Daily Citizen 15 December 1856: p. 2

The day after she died, Miss Eager was said to have appeared at a Spiritualist circle and proclaimed, “It is all true!” According to a caustic letter from La Roy Sunderland, printed in the Daily Democratic State Journal [Sacramento, CA] 20 January 1857: p. 1, “one of her friends, fearing, ‘all was not true,’ obtained the assistance of two physicians, who, unknown to the ‘circle’ aforesaid, took the stomach and a portion of the bowels for future examination,” which is how the poison came to be discovered. Some Spiritualists said that Miss Eager was too fine a soul to have killed herself merely to prove the Truth of their religion; others said she killed herself under the influence of evil spirits or had ingested the poison while in trance;  still others insisted she had earthly troubles that had led to her suicide.

I have been continually surprised at the number of Spiritualist suicides in the papers. Any others? Make an appearance in the circle at chriswoodyard8 AT gmail.com