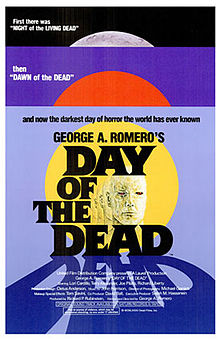 Fearing the Walking Dead: Zombies and Draugr Day of the Dead poster

As someone who routinely skips the first few minutes of NCIS to avoid seeing the corpse, I also shun zombie movies and The Walking Dead. I just can’t cope with the decomp or sloughing body parts. But there is still something horrifyingly fascinating about accounts of the dead who stubbornly refuse to lie down quietly, but continue to walk as they did in life. They may be called revenants, or zombies, vampires, draugr, ghouls, or the Undead. They scare us.

I have often said of ghosts that they are unsettling because they are an anomaly, an aberration. They don’t belong here. That goes double for a corpse, with the attendant vile decomposition and noisome gases, stumbling around the village, calling for brains. Why can’t they just be dead?

As I mentioned previously in my post on the fear of corpses, the popularity of zombies and the walking dead may be a way to deal with our dread of dead bodies, as well as fears of an impending apocalypse. In that post there was a link to the story of the draugr Glam, from Grettis Saga. Dr Beachcombing has previously written several times about the reanimated corpses of the past. See A Medieval Zombie in Berwick, A Viking Zombie, and Medieval English Ghost or Vampire?

Here are two more medieval stories of walking corpses, which, like the northern draugr, prove to be omens of death.

Of a monster in the shape of a woman who destroyed the family of two halls, by looking upon them.

In the diocese of Cologne, in a manor named Stamheim lived two knights, one called Gunter, the other Hugo. One night when the said Gunther was oversea, a maid took his sons, just before they went to bed, into the court to satisfy the needs of nature. As she stood by them, behold a woman’s shape in a white dress with a pallid face looked straight at them from beyond the enclosure. Saying nothing, but frightening the maid by her appearance, the monster went to Hugo’s land which was next, looked over the fence, as I have described and then returned to the graveyard from which it had come. After a few days Gunther’s elder child was taken ill and said: “I shall die in seven days’ time; seven days later my sister Dirina will die and then my younger sister after a week.” And so it happened. Moreover, after the deaths of the children, the mother and maid of whom we have spoken, both died. At the same time perished the knight Hugo and his son. A credible witness to these facts is Gerlac, our prior. The Dialogue on Miracles, Caesarius of Heisterbach, Vol. II, Translated by H. Von E. Scott and C.C. Swinton Bland, 1929

Also of a monster, who came out of one grave at Bonn and entered another.

A like thing happened in the Church of Bonn. Once on a time when vespers had been sung and the scholars were playing in the dusk in the cloisters, they saw a creature of human shape come out of one of the graves where the canons are wont to be buried, and after walking about over some graves, it descended into another. After a little a canon died in that church and was put in the tomb where it had entered. Christian of Bonn, a monk of ours, was an eye witness to that vision. By visions of this kind the future is sometimes predicted. The Dialogue on Miracles, Caesarius of Heisterbach, Vol. II, Translated by H. Von E. Scott and C.C. Swinton Bland, 1929

Not to be outdone by old-world revenants, Massachusetts, abode of witch trials and vampires (as reported by the late Stephen Kaplan, director of the Vampire Research Center), was also home to a walking corpse. In this case, the corpse in life seems to have been an alchemist or occult magician who had drunk an elixir of eternal life (embalming fluid?) to preserve his body. The jocular tone of the retelling of this tale (with its obligatory faux-explanation) is a function of its date: by 1903 bodysnatching was (almost) a thing of the past and a horror that could safely be made humorous; and of its author: Skinner was a journalist and an editor of that fortean flagship newspaper the Brooklyn Eagle.

THE WALKING CORPSE OF MALDEN

In the old graveyard of Malden, Massachusetts, is the burial place of a citizen who disturbed the town for years, because he would not rest after he was dead. He had been moody and misunderstood in his life, and had given his nights to the study of strange things. Odors of abhorrent chemicals had issued from his house and choked people in the street, unaccountable noises had been heard in his laboratory, shadows had flitted athwart his curtains so goblinesque and frightening that two people who saw them lay down on the spot and had fits. When his death-hour came the man called an attendant, who had braved the terrors of the mansion, and with mouth at his ear he gasped: “In my life I have differed from other men, and by the foul fiend I will continue different after I am dead. My flesh is not common flesh, like yours. It will never rot.”

Nor did it. His body was put into one of the old-fashioned tombs, five feet below the ground and reached by an iron door in a granite gable. Some years afterward this tomb was opened, and the corpse was almost as it had been in life, save that it had grown brown and hard and dreadful. A medical student, who was greatly exercised by this discovery, and had doubts if it were really a man’s body that had been coffined there, visited the cemetery alone on a squally night, entered the tomb, lighted a lantern, and with some composure sawed the head from the body and put it into a bag, intending to remove it to his home, where he could examine it at leisure. No sooner had he finished this grewsome business than there came to his ears whispers from the other coffins in the sepulchre, soft treading in the wet grass outside, moans and wails, stifled, gibbering cries; and shadows passed—he saw them on the green and slimy wall of the tomb. His heart was shaken. With a yell for mercy, he flung the head upon the floor, leaped out of the pit, and ran at a frenzied speed toward home, hurting himself grievously by falls and stumbles over graves and stones.

Some months elapsed before any one else took courage to visit the desecrated place, but curiosity would not be stayed, and after a time adventurous boys would go into the tomb and exhibit the head at the door to scare their smaller friends, especially the girls. This was always in the daytime, with a bright sun shining, for nobody would enter the yard at night lest they should see the fearful thing that happened when the clock struck twelve. On the last stroke of the bell the tomb door opened, the brown trunk in its mildewed garments crawled out of its coffin, pulled itself up by the door-ledge, and went stalking about the cemetery as if in search of its head. At the first crowing of the cock it went back to its rest. Seventy-five years ago a man bathing in the river just before sunrise saw a white-robed figure scramble out of the tomb, and, too horrified to realize what he was doing, he fled through the Malden streets, unclad as he was, waking the public with his yells. It was found that the figure was no corpse, but a poor, insane creature that had crawled into the house of death to sleep. The man was so frightened that he would not believe this. He insisted that he had been summoned by a ghost, and from that very day he began to change, becoming silent and self-absorbed, and his death occurred soon after. Then the authorities banked earth against the tomb until its door was buried, and the corpse was never afterward seen abroad. American Myths and Legends, Volume 1, Charles Montgomery Skinner, 1903

I can’t resist including this link to an amusing southern folktale of a zombified husband who wouldn’t let his widow get on with her life. We joke about the possibility of the dead returning, as we whistle by the graveyard.

Any corpses terrorizing your town?  Any thoughts on the appeal of rotting flesh?   Chriswoodyard8 AT gmail.com.

You’ll find more 19th- and early 20th-century stories of ghosts, entities, and apparitions in The Ghost Wore Black: Ghastly Tales from the Past.  Available as an e-book for Kindle and in paperback at Amazon and other online retailers. Ask your local library or bookstore to order copies from hauntedohiobooks.com.