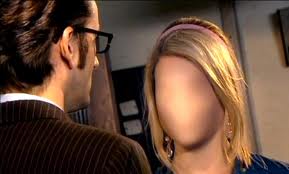 The Featureless Horror, the Skeleton Driver, and a Faceless Hitchhiker

Since so many of us will be traveling this holiday weekend, I thought I would share a few more road ghosts. In my previous post on the subject I remarked about the curious facelessness of most ghosts met by travellers. In my newest book The Ghost Wore Black: Ghastly Tales from the Past, I was also surprised to find the same characteristic in the Women in Black apparitional category. I’m drawing a complete blank about why so many road ghosts are faceless. (If you have any ideas, I’m all ears. Plus nose, mouth, and eyes. chriswoodyard8 AT gmail.com.)

What better road companion could you wish than The Featureless Horror encountered by   Elliott O’Donnell’s great-grandmother?

My great-grandmother, Elizabeth Fowke of Elmsthorpe, Leicestershire, like some of her forebears and descendants, was keenly interested in the supernatural. Her father, John Fowke, who was descended through his ancestors, Edward Shuckburgh of Naseby and Sir Thomas Halford, Bart., from William of Wykeham, Lord High Chancellor of England and Founder of New College, Oxford, and Winchester College, had a private museum of valuable coins and curios.

In his collection was a glass bottle containing a number of curious figures, with the head of an ecclesiast for a stopper. The bottle, which was between three and four hundred years old, was regarded as a talisman and a protection against evil spirits. It was bequeathed to Elizabeth, and is now mine.

Elizabeth had several ghostly experiences, and the following is one of them.

On one occasion she was driving with her father along a little-frequented road between Leicester and Lutterworth. It was getting dusk and they had come to a gloomy hollow, when their horse came to an abrupt halt, indicating signs of fear. John Fowke, at a loss to understand the animal’s unusual behaviour, plied his whip but without avail. Determined to ascertain the cause of the horse’s fright, Elizabeth alighted, while her father remained seated, holding the reins.

She was no sooner on the ground when she heard a curious sound close beside her. She looked quickly around her and saw a tall, hooded figure in black come through the wayside hedge and cross the road towards a solitary tree. When it reached the tree it turned slowly round, threw back its hood and revealed a gleaming white face, which appeared to be entirely devoid of features. Where they should have been was just a blank.

Elizabeth was terror-stricken and felt on the verge of fainting, when her father, whose attention had been concentrated on the horse, called to her. Directly he spoke the apparition vanished. Elizabeth scrambled into the carriage and was hardly seated when the horse, having recovered from its fright, spurted forward and bore them without a halt to their destination.

They subsequently learned that the tree, under which the hooded phantom had stood and vanished, had been reputed to be haunted for very many years. There was nothing, so far as was known, to account for the haunting.

My great-grandmother sustained no ill effects from her ghostly experience, a fact she attributed to the protecting influence of the glass bottle, which she always kept on a table by her bedside and treated with the greatest reverence and affection.

As always, we can admire O’Donnell’s command of the tropes of horror without necessarily believing everything we are told. IF (and that is a very large hypothetical) the bottle was real, possibly it was a reliquary bottle something like the one pictured here. I can well imagine O’Donnell purchasing such an artifact at a curio shop, then weaving around it his story (in which there is very little substantive detail except for that lofty, and possibly fictional, family pedigree.) 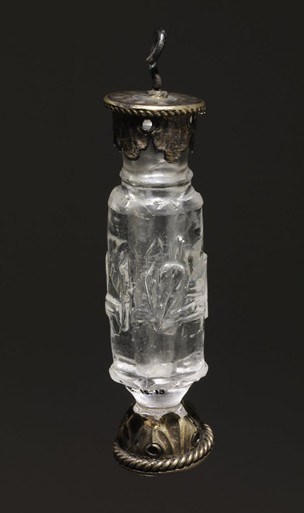 The story also falls in with O’Donnell’s penchant for haunted trees and for “elementals,” since there is apparently no history to account for the ghost.

The faceless creature is a popular Japanese ghost as well, called Noppera Bō. And, of course, it was used to great effect in “The Idiot’s Lantern” episode of Dr Who.

Or perhaps you would prefer to meet a phantom vehicle on the road? Long after coaches went the way of the powdered wig, they were still reported in spectral form careening about the countryside, usually drawn by headless horses and driven by skeletal drivers. But as the 20th century gathered steam, phantom automobiles also began to appear. This story sounds like a cautionary tale about smoking and driving, but Devil’s Bend (name game, anyone?) did have a genuine history of multiple accidents, as I found when I looked further.

Pittsburg, July 13. On Devil’s Bend, a famous curve of a favorite automobile road, near this city, the scene of a dozen or more fatalities, there appeared at midnight, it is said, a phantom auto, with two animated skeletons as occupants. The siren gave out piercing toots, dry bones rattled with the levers, and brakes were jammed hard.

The mysterious auto was seen by a party of politicians who were returning from a caucus at a nearby school. They heard the report of a car coming along at a terrific rate of speed and huddled in fear, in the middle of the road for an instant. The chug-chug of the engine grew louder and the headlights suddenly rounded a curve and illuminated the pathway. Under giant trees the auto lamps made a peculiar white light.

This caused the pedestrians to scatter. As they did so, all noticed that the skeleton form at the wheel released his grip for a moment, put a cigarette in his lips and lit a match. As the match was applied to the cigarette the auto was seen to skid on the fatal curve, and crash against the oak trees, which creaked and groaned. Then there was a flash and all was quiet.

The party regathered and then decided to hurry to the nearest farm house, that of Samuel Werdle. He was quickly aroused and he and his son Jed, with lanterns, accompanied the men back to the scene of what was thought to be another fatal accident. Nothing was found at the scene of the smash. Still unconvinced that they had seen only a phantom auto, one of the investigators returned to the Werdle residence, where he telephoned to the county morgue, but was told that no fatalities had been reported from Devil’s Bend.

In the 1950s a skeleton driving a car was seen along a huge stretch of Route 40 in Ohio and West Virginia. It terrified many drivers by driving right at them, swerving at the last minute. The perpetrator, whom some witnesses said was wearing a luminous skeleton suit and a mask, was never caught, although I have seen reports of a “lunatic” being captured in connection with the case. (Another post, another time. See “The Phantom Driver of Old 40” in Haunted Ohio IV: Restless Ghosts, Chris Woodyard, 1997.)

What would a post on road ghosts be without a phantom hitchhiker. And, in this case, a faceless one.

Rich Heileman stared at the highway stretching out in front of him.  It was nearly 1 a.m. Monday morning and he still had a half hour before he’d reach his home in Berea.  There were no lights on this stretch of I-71, north of Medina, but way ahead he saw something pale on the right shoulder.  It looked like a person wearing a light-colored coat, walking along the berm.

There was no other traffic on the freeway.

“What’s somebody doing out walking this time of night?” he thought to himself.  “And I don’t recall seeing any cars broken down along the side of the road.  Maybe I’m just imagining this.”

But as he got closer, the person was still there, a fairly young man, in his thirties, to judge by his posture and walk, with dark hair and a light tan raincoat.

“What should I do?  Maybe this guy needs a ride.”  All kinds of things went through his mind—picking up strange people late at night was dangerous, but he still wanted to help someone in trouble.

Rich got within 300 feet, maybe closer.  His headlights picked up the man who started to turn and put out his thumb.

“I never saw his face. Where his head was seemed to be dark, blanked out.  I was real close to him when the headlights went through him.  He looked suddenly transparent all over.  I could still see him.  Then he faded and was gone.

“My mind was racing over and over:  ‘Geez!  What was that?!  Did I imagine the whole thing?  What the heck’s going on?’  Then I started thinking.  ‘Yeah, you did see it.’  I saw the figure for too long a time.  It gave me the creeps.  I floored it all the way back to Berea.  Seventy miles per hour was the top speed my little ’65 VW Bug would do.  I kept wishing I could go faster.

It wasn’t hallucination; I hadn’t been drinking or ingesting other things.  I wasn’t overtired.  I’m kind of a night owl anyway and 1:30 isn’t that late for me.  I was just concentrating on getting back home.

“I was really going through this thing in my mind:  ‘Should I stop?  Nobody would be walking out there if they didn’t need help.  What am I going to do?’  He solved the problem for me by disappearing.  Then I had something else to think about….”

The next day, Rich, a Cleveland-area newspaper reporter, met his friend Mitch for lunch.

“You’re never going to guess what happened.  I was driving home from Medina to Berea on I-71.  I saw….”

Mitch stopped him in mid-sentence: “Don’t tell me.  You saw the I-71 hitchhiker.”  And he told Rich that the police and sheriff have had many reports about the vanishing man.

“I’ve driven that route since, any number of times, but I’ve never seen anything again.  Maybe you have to be there at the right time.”

Or it could be that you have to be in just the right frame of mind.  Rich was concentrating on getting home.  Maybe the hitchhiker was too.

Since I interviewed the witness and this was published, I’ve heard from two other people who claimed to have seen the same apparition.  I’ve also driven that same stretch of highway several times, alone, late at night, and I’m relieved to have never sighted anything.

Here’s hoping you don’t run into any sinister road ghosts on your travels or, if you do, that you have supplied yourself with an anti-ghost specific like a reliquary bottle.