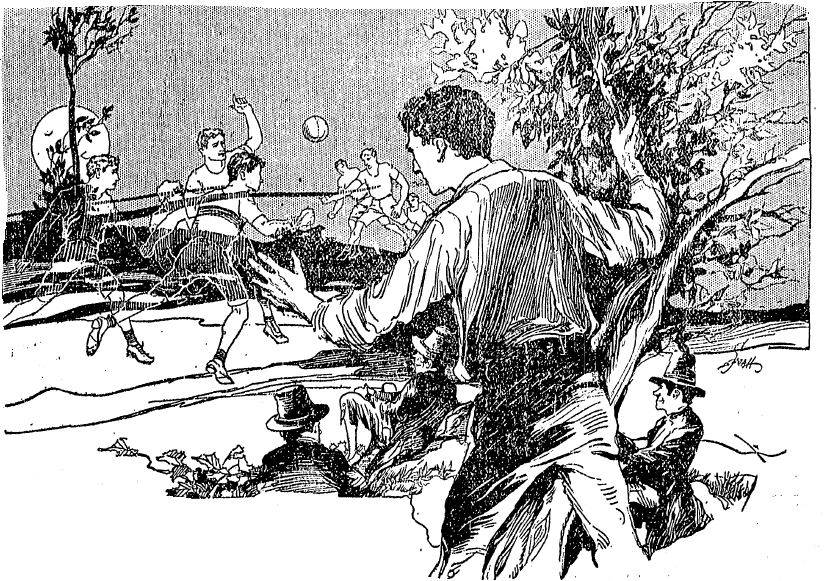 To use the vintage blarney, so popular with journalists publishing in American papers—sure, and it’s a curious tale for St. Patrick’s Day I’ll be telling today–about some football-playing fairies of Ireland. Bear with the author for a bit while he waxes rhapsodic about the Dear Green Place, as he sets the geographic scene.

The particular district for the nonce lies in southern Ireland, at the southwestern end of the glorious golden vale; it is a rich country, almost rolling with fringes of woods about, a stream here and there, and those hills, so small but “big enough, sir,” and the idealistic nooks and shades for lovers made along the whole country side. And then the “forts”; ah, there is where the fairies dwell, and one must be careful not to disturb them.

So much so is this idea observed that never in Ireland will you find a so-called fort disturbed, never dug up, never planted, simply that greenest of green grass almost all through the year. It is supposed that these mounds, small and sometimes obscure, remain from other war days and possibly then were resting places for the dead. They are treated with reverence, be sure.

The average would run around twelve or fifteen feet high, about sixty to eighty feet in diameter, with a little rim around and usually a few tress. For a settling such as should properly be akin to the home of the fairies or good people there is no place like Ireland…

The old hill of Killalea is not surpassed in Ireland. It rises gradually from the western end of the golden vale (or, as some have it, golden vein) and sloping so little as to be scarcely noticeable till in the course of two or three miles it attains an eminence of some eight to nine hundred feet over the valley below.

The land here is very rich and in the fall of the year, especially after the hoar frosts of the morning is dissipated by the sun, no more charming scene could be presented to the eye; there, assuredly, the grass grows green.

The hill slopes from east to southwest with a heavily wood glen all along the western side, and through the glen flowing form the hill beyond and to the north is a good sized stream. Limestone is the general substrata, hence in the bed some rock and stone abound and at any time, especially at night, the river sings loudly as it runs with sometimes a splash as an otter jumps for its prey. In the stillness some may sometimes be frightened at the sudden sound and echo among the dense wood, an echo which is all the more sonorous when it is raining and a strong westerly gale is blowing.
The place at the water on the roadway was called Ballagh, pronounced Bal-lock, and the wooded glen was called Plum Hill. The fort was called Hector’s Fort, and, as they say in Ireland, had a bad name; that is to say, some weird stories were told of it; the fairies abounded and strange noises were often heard and strange lights were seen flitting at night, and the horses and hounds were often heard in full cry and wild winds blew around.

Further beyond and to the southwest was what was called the “mountain;” by mountain was meant not a mount or hill but that it was wild, heathery, watery, boggy land, the rendezvous of the curlew and snipe, where a sportsman was always at home. “Jamesy,” the warden, as he was known to all the hunters, never was at a loss to take you to the lair of a fox or a hare. This was the locality on the October nights in ’74—it was Hallowe’en, the night when all fairies and good people are abroad and on that night befell the happening of our tale.

The hero, Davy Lynch, was born to the west some seven or eight miles and was the son of a farmer. He was brought up to do farm work, was some six feet tall, broad shouldered, agile, swift and strong. He was a good type as young men ran, temperate and of an easy going disposition. But—and here’s the ruling feature—Davy was never friendly to the good people, affected not to believe in them, ridiculed the stories of them and their ways and claims—in a word, he spoke against them.
On the particular day a cattle fair was held at a down, Dromina, with a brother and also a friend of his on his way home. They left the fair late in the evening, so that it was approaching midnight when they got near Ballagh. Seeing a light at the home of a farmer directly on the road, Davy told his companions to walk along; that he was going in to light his pipe and would catch up with them. He did go in, got his pipe going, and in a few minutes left, proceeding west until he got to the lough, and this is the story as he told it:

“I was just stepping past the lough and hurrying to catch up with James and Ned when all of a sudden it seemed as if a wind blew under my feet and lifted me clean into the long field. I could not quite understand, but in a moment I found myself surrounded by a crowd of young men. They seemed to be playing football, and over in a corner I noticed a dance going on and heard some pipers playing. There quickly arose a controversy and there seemed to be some who were unfriendly and hostile.

“Their attitude showed resentment to me and a desire to cause me trouble. The other group opposed any hurt to me, and the debate was getting warm when the two Carney boys (both were sons of the farmer at whose house Davy had just called to light his pipe) interposed and demanded that I should be handed over to their custody.

“I knew them at once; they were dead only a year or so; we had always been warm friends. After much discussion and over strong objection by some opposed I was handed over to my sponsors.

“They told me not to look back nor to notice any one as we went along. I did not know where we were going, nor did I ask, only they said; ‘We will see you safe, Davy.’

“In a little while I found myself at Dunville’s house and in front of the north wall. I cannot tell how I was put in, but afterward they told me that they found me inside the small, locked and iron bound window room. I was not in any way hurt, but kind of dizzy for a few days. I don’t want to have any more such experience nor say anything about the good people or otherwise.”

Dunville was an alert, courageous and powerfully built man. He and his wife occupied the bedroom. They were both awakened by a noise, as though something had fallen in the office.

Dunville at once grabbed the gun and with his wife, who had a lighted candle, went at once out the office door, which he opened carefully, holding his gun ready. Hardly had he opened the door when a voice form the inside said: “Mr. Dunville, this is no enemy. I am Davy Lynch and a friend.”
Davy repeated the story to Mrs. Carney, the mother of the two dead boys who befriended him. I heard the story from her. Davy told me the story himself and about that time. Nineteen years later I was given confirmation of her part as related by Mrs. Dunville.

What intrigues me is that while fairies are often seen horse-racing or (most commonly) dancing, this isn’t the only story of football-playing fairies. In Marjorie T. Johnson’s book, Seeing Fairies, there is an account from one James O’Connor of County Meath, who shared it with Miss Johnson in 1955. He set the event 60 or more years before, when he was nine years old. He, too, mentions proximity to what may have been a fairy fort, called “Cobbler’s Hill.”

“I was coming home along the Cavan-Dublin road with an aunt of mine, Miss Alice Connell, who had been milking her cow. I looked over the hedge, which bordered a triangular field, the apex of which would not be more than 20 yards, and saw some men kicking a football. I took them to be local, as they wore whiskers like some of the men from the town, but their head-gear seemed peculiar, though I can’t say definitely in what way. My aunt did not notice them. Time rolled on, and I still could not get them out of my mind, but it was not until many years afterwards that it dawned on me who or what they really were. They had been kicking the football in the apex of the triangle, and this was bounded by the road on one side and, of course, by the field on the other. I realized that it would be impossible for any full-sized man to have kicked the ball without it going repeatedly on to the road or the field. The thought of these people haunted me so much that they seemed to have cast a glamour over me, and it lasted for over 40 years…. Seeing Fairies: From the Lost Archives of the Fairy Investigation Society, Authentic Reports of Fairies in Modern Times, Anomalist Books, 2014, a book which I highly recommend in this review.

The “Golden Vale/Vein” is in Limerick, one of the epicenters of the fairy faith. The ghosts of the two Carney boys reflect a belief in some areas that the dead live in fairyland. Lynch’s finding himself in a locked room is a common trick of the fairies and also has parallels with mediums being “teleported.”

This is the only source I can find for this story, which was bylined “P.J. O’Keefe.” I can’t seem to find the Old Hill of Killalea at all. A misspelling?

Any other fairy footballers or, indeed, fairy sightings of any description? The Fairy Investigation Society recently launched one of the largest folklore surveys in history, so if you have fairy tales—your own or someone else’s—please share. You’ll find complete information and links here.

In case you missed it,  last year’s St. Patrick’s Day post was “So an Irishman Walks into a Medium….”

UPDATE: Bob Skinner has very kindly sent me this, which was originally posted by Richard Muirhead on The Curious Fortean FB page:

“TINY FOOTBALLERS (Bealoideas vol 9, 1939)” Some years ago there was a man living near Ballyroan who used to work for a farmer in Colt. One evening in Summer he was returning home from work. He used to cross the fields as a short-cut, and after he had passed through the bog and entered Ballyruin he saw a number of tiny men kicking a football. He watched them for quite a long time, and in the end one of them came over and addressed him thus: “Kick the ball, Jimmie!” and at this he made several attempts to kick it, but no matter how near it appeared to him he was unable to hit it. The game continued for quite a long time, and in the end his turn came, and he struck the ball. When he did so, he fell in a dazed condition on the ground, and when he recovered the little men had disappeared.”