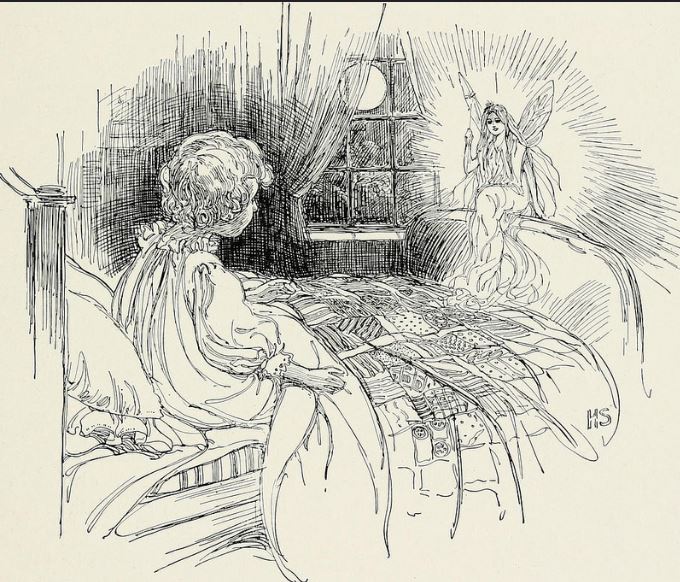 The Fairy in the Box A little girl converses with a fairy sitting on her bed.

Biographies of popular Edwardian lady novelists written by their daughters are apt to be written in a hazy of rosy chiffon. The Life of Florence L. Barclay tells of a woman who, in many ways, filled the societal roles allotted to her. The free-spirited but trammeled daughter to a clergyman, she was taken on charitable visits to factory girls, where she charmed them with her fiddle-playing. At a young age she helped her invalid mother run the rectory, then married a curate at age 19. (They went to the Holy Land for their honeymoon.) The usual charitable works and a series of painful illnesses heroically borne followed. After a career as parish organist, Sunday school teacher, charity worker, and best-selling novelist, she died aged 59 during surgery.

A full, if somewhat conventional late-nineteenth-century life, we might think (aside from the best-selling novelist bit and the fact that she was an unusually enthusiastic sportswoman.)  Yet there are incidents from the book that are far from conventional. One wonders what the Women’s Institute would have thought of their Rector’s wife after reading the following passage, introduced by a discussion of her wonderful imagination as a child:

But quite apart from stories, apart even from make-believe and imagination, she used to have strange visions of fairy beings which were to her a complete reality and whose existence she never doubted. As she lay in bed, in the dark, out of a certain corner of the room, near the ceiling, would issue forth a procession of tiny people. They were dressed in little coloured hose and jerkins and caps. Some rode on tiny beasts, others ran and jumped and danced. Across the room they would float while she watched in delight, and as they passed her some would turn and wave their hands and smile at her. So near they seemed that she could almost have touched them. Night after night she saw her Little People, and she grew to know them so well by sight that she would look out for this and that one in the procession. She never doubted that they were real, and took the keenest delight in seeing them every night. She often spoke of them with her little sister, and one day she was overheard by her elder sister. “What nonsense!” this one remarked. “Fairies! There are no such things. You shouldn’t tell stories. You’re just making it all up.”

Benny protested hotly that she did see the Little People and they were real. So Annie gave her a little tin box.

“If they are real,” she said, “catch a little man in this. Don’t open the box till the morning. Then open it and show him to me.”

Benny felt a little doubtful as to whether the little man would like to be caught. However, Annie pressed her, and thinking he could be replaced in the procession the following night, she accepted the challenge. That night the Little People appeared as usual in the corner of the room. She had fixed on a certain little man she meant to catch, and as the procession came towards her, she stood up eagerly in her cot, the open box in her hands. Quickly she slipped it over the little man, and put the lid on before he could jump out. The procession moved on without him, and she lay down in her bed again, her heart beating with excitement.

When she woke up the sun was streaming into her room, and the first thing she thought of was the tin box. Yes, there it was on the table by her bed, the lid firmly closed. To think of it—there was a little fairy man inside! She was almost too excited to eat her breakfast. No sooner was it over than she called her two sisters out to the garden.

“I’ve got him!” she said, clasping the box to her. Maudie was all joyful faith, Annie was skeptical but interested.

The three small girls made their way to a remote corner of the garden that seemed suitable for a fairy to be let out in. “Now,” said Annie. Benny opened the box… Alas, it was empty!

Another mysterious person she used to see was a little old man who sometimes sat beneath a table at the bottom of the stairs. Once she called her father and mother out of the drawing room to see him; but he vanished, and she was so severely reproved for romancing that she never again spoke of such things.

I have to say, I can’t imagine having breakfast before opening the box… We might write this off as just a charming incident told by an imaginative child. However, Barclay’s biography devotes a good number of pages to her psychic abilities.

“One of these [psychical gifts] was a form of clairvoyance I have never heard of in anyone else, namely, the power of finding lost things, so long as she had at one time or another touched the object…What she did was simply to make her mind a blank, and then suddenly go straight to the place where the thing lay concealed and put her hand upon it.”

“Things of her own had a way of doing what she termed “calling out to her” if inadvertently lost or stolen.”

In particular Barclay believed in “the psychic effect of old things upon the mind. She liked to think that articles of furniture or other possession of people of long ago could somehow call up in the minds of those attuned a consciousness of these long-passed events. She believed that this might be the explanation of most ghost stories.”

Despite her own talents, she “believed such [psychic] gifts to be unnatural, too great a strain on the mind and not intended for use in this life.” Although she had a horror of Spiritualism, she had the “power of mental-suggestion” and was credited with many cures by the use of suggestion and massage. Her daughter wrote that “She was not given to having premonitions, but on three occasions she seemed to hear a warning voice, and by acting upon the warning averted a calamity,” citing in particular a zeppelin attack that, but for her instant action, could have been fatal.

Does the persona of Barclay as an “experiencer” mean that she actually did see fairies? Did it make her more susceptible to hypnagogic visions? It would have been satisfying to astound her older sister with a genuine fairy-in-a-box, but I fear that, in the tradition of leprechauns, once she took her eyes off of it, the little man made his getaway.

Other fairy capture stories told as real, rather than folklore? Send to Chriswoodyard8 AT gmail.com, who has a net at the ready.