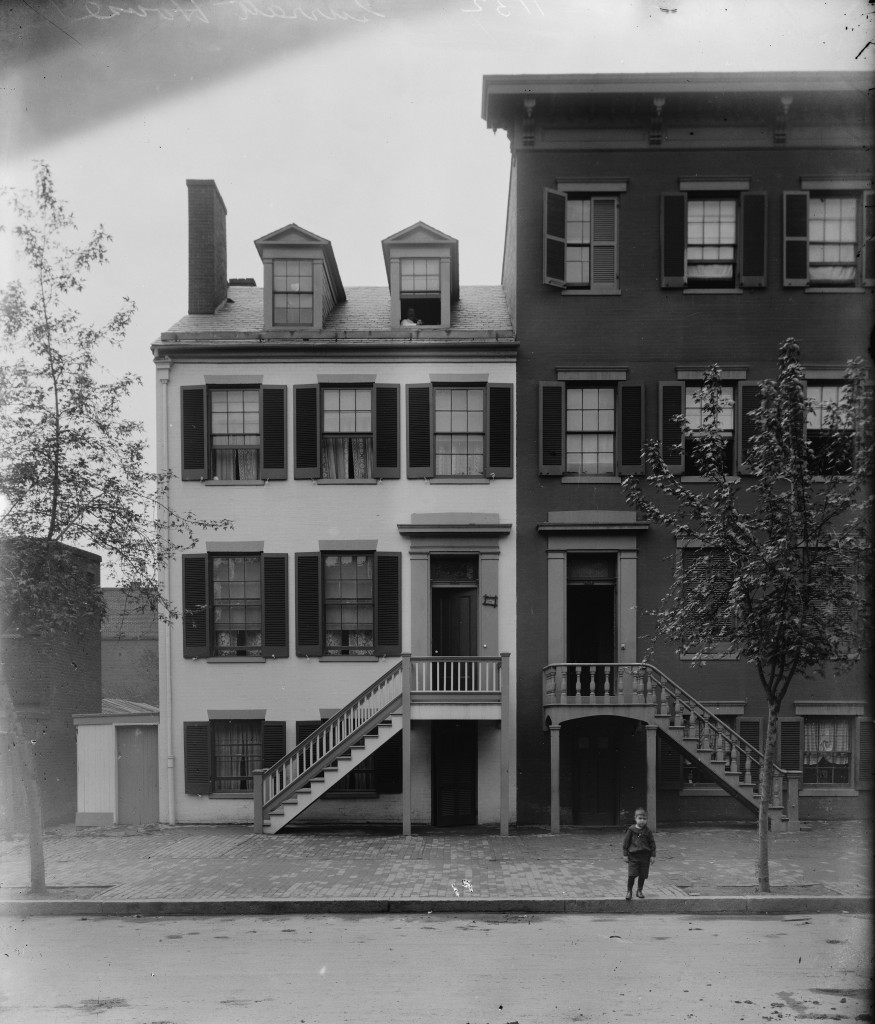 It’s one of the many mysteries surrounding President Lincoln’s assassination: Was Mrs. Mary Surratt innocent or guilty? She owned the boarding house where Booth and the other conspirators met. It was said that President Johnson refused clemency because she “kept the nest that hatched the egg.” Mrs. Surratt’s son, John H. Surratt, was a Confederate spy and was actively involved in a plot to kidnap Lincoln, although he always claimed he drew the line at murder. He fled the country when the others were arrested and I am not aware that he made any attempt to proclaim his mother’s innocence or prevent her execution.

I have to confess that, innocent or guilty, I have always felt a touch of sympathy for Mrs. Surratt. She was married to a brutal alcoholic husband who was hauled up on a charge of bastardy for an illegitimate son and who spent profligately on his grandiose schemes, despite apparently being a lousy businessman. Her son abandoned her to the gallows (although, to be fair, any protestations of her innocence he might have made would probably have been discounted) and her daughter Annie, who had a breakdown after she was unable to reach President Johnson to beg for mercy for her mother, suffered depression and anxiety the rest of her life. Some historians have suggested that the trials and executions of the conspirators were indecently hastened so that no one would look too closely at plotters within the government itself. Others have criticized the validity of the trial itself and the credibility of the witnesses against the lady.  Mrs. Surratt’s ghost, whether wracked with her innocence or tortured by guilt, had every reason to still walk.

There is a three-story brick tenement, in the middle of a block, fronting upon one of Washington’s lesser thoroughfares, that is making itself peculiarly obnoxious to timid people, and ridiculous to the stout-hearted. The building in question is none other than that belonging to Mrs. Surratt, executed as one of the conspirators of the assassination, and in which she was apprehended and led forth for accusation and the gallows. In the course of settlement of her estate, the house in question was offered for sale, and even then the public seemed shy and indifferent to the purchase, and so it came that a property, worthy, by moderate comparison $10,000, fell under the hammer at the insignificant sum of $4,600. The new landlord, therefore, instituted such improvements as completely changed the aspect of the property and all but transferred its site, and in the course of time came a tenant; but not to remain. In less than six weeks, the lessee had flown from beneath the roof, forfeited his year’s rent, and was ready to swear with chattering teeth that his nervous system was shattered for a lifetime.

Others succeeded to the occupancy of the house he had vacated, in turn, to make a shuddering exit. Mrs. Surratt’s house is haunted. There can be no reasonable doubt upon the subject. She herself persists in treading its halls, and perambulating the premises in the dead of night, clad in those self-same robes of serge in which she suffered the penalty of the law. In costume, she differs from the “woman in white” unmistakably, but that the general effect is none the less thrilling and altogether fatal to the composure of the observer, is positively averred by each successive occupant of the mansion. People who reside within adjoining walls are not troubled with either sights or sounds, but they begin to have a wholesome dread of the mansion in their midst, and have actually procured a reduction of their rental upon the ground of exposure to an unabateable nuisance. Thus the whole of a very common-place neighborhood is infected with a fancy that keeps them within doors of nights, and causes the local juveniles to abandon their games in the courtyards with the sinking of the sun.

The building, 541 H Street in Washington, D.C., is on the National Register of Historic Places and is now being used as a restaurant. Mrs. Surratt, who went to the gallows wearing full mourning, including a heavy black veil, made an ideal Woman in Black ghost.

Even long after the assassination, Spiritualist groupies were eager to capture messages from the dead conspirators, whom they assumed were standing in line for a chance to tell their side of the story. I was intrigued to find a communication from Mrs. Surratt at a séance held by our old friend Dr. Theodor Hansmann, whom we have met before name-dropping about his “spirit friends,” who included Noah, John Wilkes Booth, Queen Louise of Prussia, Confucius, Robert E. Lee, and George Washington. This bitter message came during a slate-writing session.

Mrs. Surratt’s message was put in the lower left-hand corner of the slate in a very close, small hand. It was as follows:

“Sir and Doctor—I was jerked from hell to paradise. Earth was my hell; death was my release. So help me God I was innocent, and a foul murder, worse than poor Mr. Lincoln’s, stains the annals of the American nation. Gen. Hancock [who carried out the execution and blocked a last-minute writ of habeas corpus from Mrs. Surratt’s attorneys] is now having his hell, for had it not been for him I could have been spared to my suffering daughter. Curse him! Curse him! 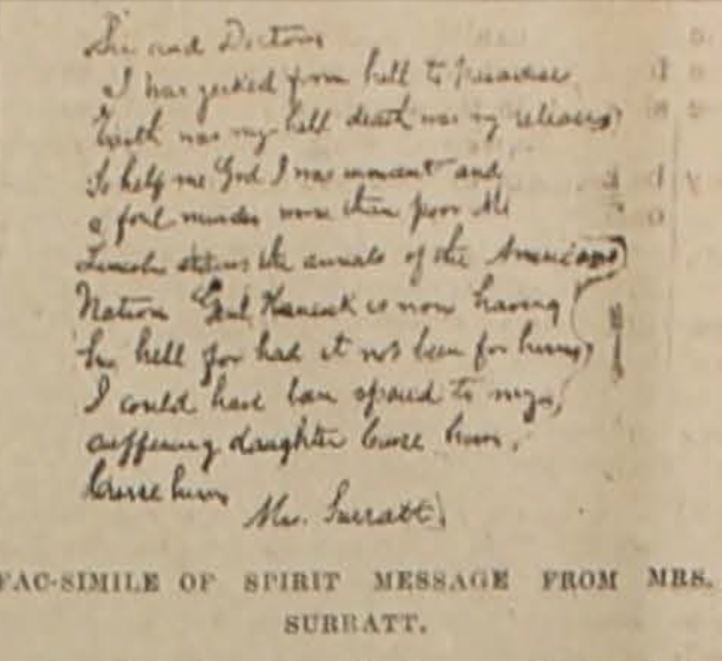 There is another Mary Surratt House: the structure built as a tavern by Mary’s husband and which formed the nucleus of Surrattville, Maryland. It is now a museum run by the Surratt Society, an organization which studies Lincoln conspiracy theories, particularly those which suggest that Mrs. Surratt was innocent. Although this site tells of some ghostly sightings at the Maryland house, including the spirit of Mrs. Surratt, it also mentions medium Sybil Leek, visiting the tavern with Hans Holzer. She supposedly connected with “Edwin Booth,” described as one of the tavern’s owners. According to researchers at the Mary Surratt Museum, this is incorrect–there is absolutely no evidence that Edwin, John Wilkes Booth’s brother ever owned the Surratt tavern. Revisionist history via medium is not always reliable.

Some ghosts seem to have statutes of limitation, where they wear out / stop appearing after a few years. The report of the ghost of Mrs. Surratt above dates from the year after her death. Have there been any recent Surratt sightings at either house? chriswoodyard8 AT gmail.com.