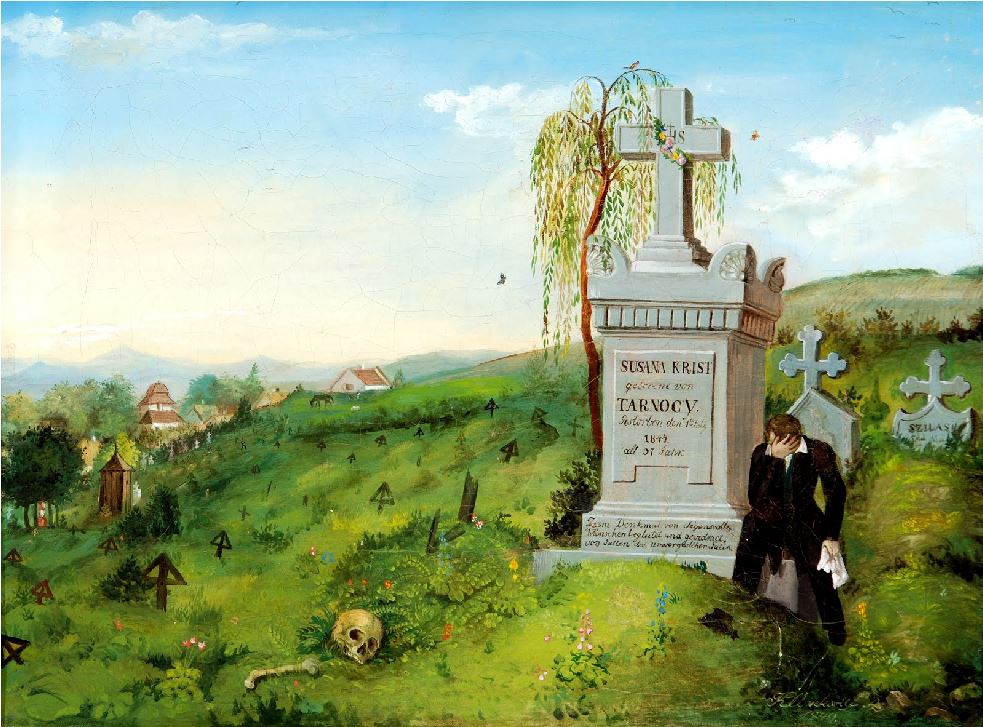 Haunted by a Death-bed Promise Parted from his loved one, a man weeps at her grave.
Kosicky cintorin, Cemetery in Kosice, Frantisek Klimkovic, 1849
https://www.google.com/culturalinstitute/beta/asset/kosicky-cintorin-cementery-in-kosice/yAEb96eieM0q9g

Death-bed promises should be broken as lightly as they are seriously made. The dead have no right to lay their clammy fingers upon the living.

In researching my various books from the Ghosts of the Past series, I’ve run across a minor theme of “death-bed promise” hauntings. Husbands or wives, from the hopelessly moral elevation of their death-beds, would ask their spouse to promise to never marry again. Some of this was undoubtedly anxiety about how a stepmother—proverbially wicked—would treat the children. I’ve written about a step-mother’s sinister haunting here. Some of these requests, however, seem to have sprung from sheer jealousy and control issues, like those of Simon Fisher, who haunted his family after his wife broke her coerced promise not to marry her “affinity.”

The stakes were high. Family, friends, and society might censure those who broke their promises. Weddings were called off under duress from the dead. This widower foolishly seems to have thought his late wife would not notice or haunt him if his bride kept her maiden name.

William J. Latchford made a death bed promise to his first wife that he would never remarry, and so he made his second wife, Mrs. Mitzie Latchford, 709 Fifth avenue, keep their wedding a secret, she testified before Superior Judge Mogan yesterday in seeking a divorce. They were married in Santa Ana August 5, 1926, and separated in Los Angeles on November 6, 1926, as a result of his painful cautiousness, she declared. He insisted on her using her maiden name of Weiss, she said, and made her remove her wedding ring when they went out in public. Her mother, Mrs. Jeannette Weiss, acted as her corroborating witness. San Francisco [CA] Chronicle 15 April 1927: p. 3

But, as the following two stories make clear, the dead had an uncomfortable way of reminding the living of their promises.

Death bed promises, it seems, even in Ohio, [!!!]  cannot be broken with impunity. Owen Clark, of Cleveland, promised his young wife that he would never again pull in double harness. After meeting a handsome widow named Mrs. Murphy, he repented of his rash promise. The nuptial day was set, and Owen saw a ghost, for on that morning he made his will, then he called on an undertaker, and approved a bill for a respectable funeral for one. These cheerful preliminaries arranged, the bridal couple drove to the church and before the last words of the service could be pronounced he fell dead. Mrs. Murphy gets $40,000, but is still a widow. The Democrat [Wichita KS] 29 August 1891: p. 1

There is a temperance subtext in this next tragic story, which may be relevant or may be merely the paper’s editorial position. A change in the widower’s personality is noted, but was it the drink or guilt over his “infidelity”?  Or was it the dead wife standing at the foot of the bed?

GHOST OF FIRST WIFE DROVE HIM TO KILL HIMSELF

George Vedder Had Broken Oath of Loyalty made at Her Deathbed.

It Was Only a Short Distance From Saloon to Reservoir After Haunting Began.

A shadowy figure from the other world, standing silently beside the bed of George Vedder and constantly reminding him of solemn oath that he would be faithful to his love, sent the man to the bottom of Fort Field Reservoir, a suicide. The story came to-day to the surface as Yonkers folk talked of the strange things that had happened In the Vedder home.

The stories followed the funeral of the man, which took place yesterday. The Vedder home is at No. 410 Walnut street, In the midst of a colony transplanted from the Continent. It has its mysticism, its superstition, its picturesque customs, and all of the stage setting for the weird narrative that is here to follow.

Ten years ago there came from Russia in the steerage of a big liner a young fellow who had determined to make his way in the world. In the same ship came a young girl, fair to see, and of strong character. A voyage friendship grew between the two. The man was Vedder; the woman, or more properly, the young girl, was Mary Ivanko.

As they had together left the same region, Fate ordained that they should be neighbors in the New World, Both were employed at the Smith Carpet Works at Yonkers. Both saved money and prospered. The friendship ripened. The young woman left the works and went to preside as the wife and mistress of Vedder’s home.

Three little ones were born to the Vedder home. Joe, now seven, Mary, five, and George, three years of age, completed the little nest when early last fall the young wife fell ill. It was during her illness that she became obsessed with the idea that George would marry again, and that another would come to take her place in the home. She asked Vedder to swear upon a sacred ikon that he would not marry again in case of her death and he readily consented. October came and the young wife died.

Wife In Name Only.

Also he watched petite Mary Gopopski, just past twenty, scarcely more than four feet tall and with a face that looked like the pictures of the Madonna.  He remembered that she had been kind to him. It occurred to him that she might be kind to the children. He evolved a scheme for a proposal unique in its nature.

She was to marry him, yes; but she was to take the place of a wife only in relation to the care of his dead wife’s children. His own heart was in the grave. Would she care for the children and give up her place in the mill?

Then there came changed times for the Vedder home. The man was a different person from what his neighbors and friends had known. He found his way sometimes to Joe’s saloon. There had been a premonition of the change three days before the wedding when the man came into neighbor Wlasty’s home, his hair standing, his face pale and his limbs trembling.

The neighbors thought him drunk and let the outburst pass without comment.

But the man passed the whole night on the floor in a nearby apartment and dared not return to his own room. The wedding passed. The new wife saw her husband fall in a fit from his bed. She heard him scream, “She is standing there at the foot of the bed; she is standing there! She won’t say anything, but she is looking at me!”

Then, in the dead of the night, the sacred Ikon dropped from its niche and was shattered.

The man was horrified. He wandered over to Joe’s saloon and took a drink. The saloon man, noting his stare, asked questions.

But his lips were sealed beyond that expression. No effort would get him to explain to the outside world what he meant by that statement. Only the Wlasty family knew all of the story. There came night after night the ghostly visitation. The white-robed figure would appear to the man, take its place at the foot of the nuptial couch and gaze at him.

Saturday morning the man was sad and depressed. He went to the bank and drew $300. He brought the money to his wife, who, thoroughly confused by the strange turn of events, did not question him. Then he left the house. Late in the afternoon when he had not returned friends went in search of the husband. They found no trace of him.

As they returned to report the failure of their search they met men bearing the body of a suicide from Fort Field Reservoir. The body was that of Vedder.

He had done his penance for the broken oath, for the vow of eternal love that was not kept.

It’s all very romantic to force such an oath, but surely the dying wife must have worried about how Vedder could take care of the children and work at the same time. Mrs. Vedder did not seem to have been as concerned about inflicting an unsympathetic stepmother on the little ones as she was about enforcing sexual fidelity.

There is something more than a little disingenuous about the notion of the widower trying to fool his dead wife (and, perhaps, his neighbors) with a marriage “in name only” and “only in relation to the care of the children.” How gullible does Vedder think his late wife was, that she would fall for a claim of a mariage blanc?  If this truly was a marriage in “name only,” how was it that the second Mrs. Vedder was present when her husband fell out of the nuptial couch in a fit? No wonder he was racked with guilt.

Other examples of death-bed promises about remarriage haunting a bereaved spouse?  I wonder if these stories could be associated with changeling wife tales, so fraught with ambiguity  for the widower, where the wife’s ghost announces that she is not really dead, but has been taken by the fairies? chriswoodyard8 AT gmail.com