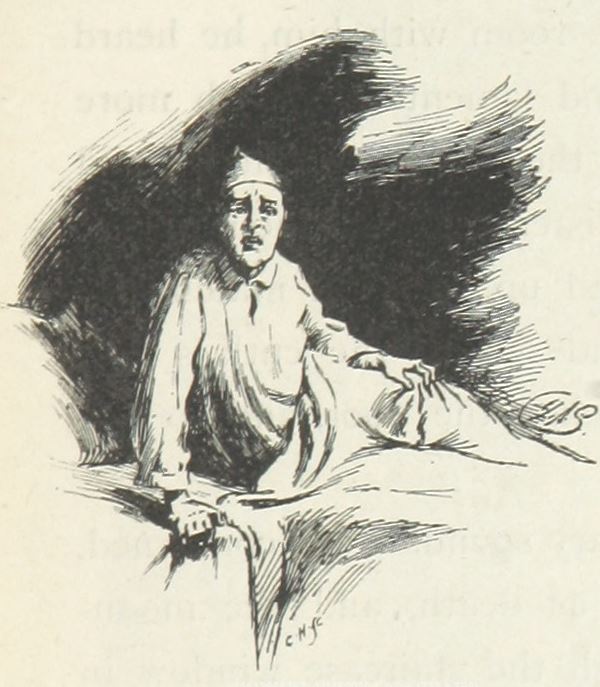 Something simple today: a revenant with a long memory, returning after 20 years to haunt the same man.

‘I send you herewith my plain, unvarnished tale, according to your kind request. I may say in confidence that the house was —- —-, Deal, but I would rather that my name and the name of the house should not be mentioned in case you care at any time to give publicity to the story. The only tales dealing with ghostly phenomena which seem to me to be of any value are those relating first-hand experiences. All others are so embroidered that the truth of them is merely a matter of surmise.

‘My experience was horrible, so much so that I have vowed never to have anything to do with spiritualism in any shape or form. I want no more materializations, which seem to be the goal of all ardent spiritualists.’

The house in question is an old Georgian house in Deal. It was built about 1740 and Nelson addressed many of his letters to Lady Hamilton from there, calling it ‘dear —- House’. My host and I had been yachting together, and on our arrival from the sea unexpectedly found the house full of relations who had come to stay. A bed was arranged for me in a dressing-room. On a previous visit I had heard that the house was haunted and that all the daughters had seen the figure of someone they called their great-grandmother gliding about. The servants had been terrified, and in consequence of what they saw had refused to stay. I had forgotten this. I was in rude health after my Channel cruise and nothing ghostly was discussed before I retired to bed.

In the middle of the night I awoke, feeling that something uncanny was about me. Suddenly, there appeared at my bedside the phantom of either an old man or woman, of dreadful aspect, who was bending over me. That I was wide awake is beyond all question. I at once became cataleptic, unable to move hand or foot. I could only gaze at this monstrosity, vowing mentally that if I ever recovered from this horrible experience I would never dabble in table-turning, Planchette, etc., again, for here was a real materialization and the reality was too terrifying for description.

Next morning I told my host privately of what had occurred. He said he was not in the least surprised, as everybody living in the house except himself had, at one time or another, seen something of the sort.

Twenty years passed and I had almost forgotten the incident. I had frequently re-visited the house and had seen nothing. Then one day I was again invited and found my host alone. We played billiards together and retired rather late. I was suffering from toothache and on getting into bed was utterly unable to sleep. The room was in a different part of the house from the dressing-room in which I had slept on the occasion of my first visit.

Suddenly, although it was early summer, I began to feel very cold. I seemed literally to freeze from my feet upwards, and, although I put on more clothes, the cold rapidly increased until I imagined that my heart must be failing and that this was death.

All at once a voice (unheard physically) appeared to be saying over and over again to me, ‘Here I am again! Here I am again, after twenty years.’ Once more, in an exact repetition of my feeling twenty years before, I was conscious of the presence of something unseen in the room. I pulled myself together and said to myself, ‘This time I will see this thing through and definitely prove whether my former experience was an hallucination and whether there really is such a thing as a ghost. I am wide awake beyond all possibility of doubt and only too conscious of a raging toothache.’

The thing again spoke to me mentally: ‘Look round. Look round.’

I now had that unaccountable feeling of horror which all accounts of such manifestations agree in declaring are produced on such occasions. Turning round, I saw in the corner of the room facing me a curious column of light revolving spirally like a whirlwind of dust on a windy day. It was white, and as I gazed, it slowly drew near to me.

‘Here I am again!’ the thing kept repeating.

I stretched out my hand for the matches at my bedside. As the thing got gradually closer and closer to me, it rapidly began to take human shape.

Under my eyes and within my grasp it assumed that very figure I had seen twenty years before. There was no doubt whatever about this, and having reached the limit of my endurance, I shouted out, ‘Who’s that?’ No answer coming, I hurriedly struck a match and lit a candle.

Next morning I told my host what had befallen me. He was greatly interested, and related two weird occurrences in the house, both of which had taken place during the three weeks previous to my visit.

On the first occasion he was in his dressing-room, when a servant came up to say that a friend had called to see him. He ran hurriedly downstairs and, as he turned on the landing for the next flight, he saw the figure of a man rushing upstairs. My friend, unable to stop himself, put up his hands to avert a collision and went right through the figure.

The second occasion had been when one evening an officer of Marines came to play billiards with him and brought his dog, which lay down under the table. Suddenly the dog sprang up and began barking furiously at something invisible in the corner. It went on barking till its mouth foamed and its hair stood on end. They endeavoured in vain to calm it. From under the table it kept making violent rushes at the corner, and then retreating again. Neither my friend nor the officer who was visiting him saw anything.

Oh, those damnably discreet dashes!  I did a cursory search of some of Lord Nelson’s letters, but failed to find any reference to a “dear ___ House.” If anyone knows which house in Deal this might be, please share: chriswoodyard8 AT gmail.com.

Now we could easily dismiss the narrator’s first experience as sleep paralysis or the Old Hag. The second, if Mr. S__ was actually awake, is harder to explain away.  I keep thinking that Gef or the Bell Witch said something very like “Here I am again!”  And I also have an incongruous and completely irrelevant image of the sinister entity doing a music hall turn with “Slap Bang Here We Are Again!”

The luminous spiral is quite the effectively eerie image. It is also one that would have been familiar to séance-goers. Here a Mr. Henry D. Jencken, barrister-at-law, describes luminous phenomena at a séance with D. D. Home:

A jet of light then crossed the room, after which a star or brilliant luminous disk, followed by the appearance of a softly luminous column of light, which moved up between me and my friend. I cannot say that I could discern any distinct outline. The luminous column appeared to me to be about five to six feet high, the subdued soft light mounting from it half illumining the room. The Spiritual Magazine, 1868: p. 35

This was followed up by very earthly sounds of footfalls, as well as a chair being moved next to Mr. Jencken and his receiving a kiss in the dark, all of which rather spoils the mysterious effect of the luminous column.

In a report on the “Laws of Spiritualism,” given by Mr. Jencken to the Committee of the London Dialectical Society, he described the same séance:

I have seen a spirit form at a seance held at Dr. Gully’s, September, 1867. The form appeared luminous—the top rounded off. I could not distinguish the features. The height was middle sized, and the form appeared to me like a luminous column or cloud. On passing to my left, and close to Dr. Gully, I noticed that the luminosity of the figure cast a glow of light upon my friend. The form, as it stood next to me, spoke several words, audible to all, and then walked to the fireplace at the end of the room ; the floor vibrating again to the heavy footstep.

A similar luminous presentation was found in a case occurring at “Ammersweiler, [Emmersweiler?] five hours’ journey from Weinsberg, a spirit used to appear, the face of which emitted a light that illuminated everything in the room; but the rest of the figure appeared only as a grey vapoury column.” [Spiritual Magazine 1862: p. 450]

Was someone, knowing that Mr. S__ had dabbled in Spiritualism, playing a phosphorescent trick on him?

Other periodic elementals? Or luminous spiral ghosts? I’ve written before about mysterious pillars of light and light-clothed appearances of the sidhe out of doors, but human-sized glowing columns are somewhat rarer outside of the séance room.