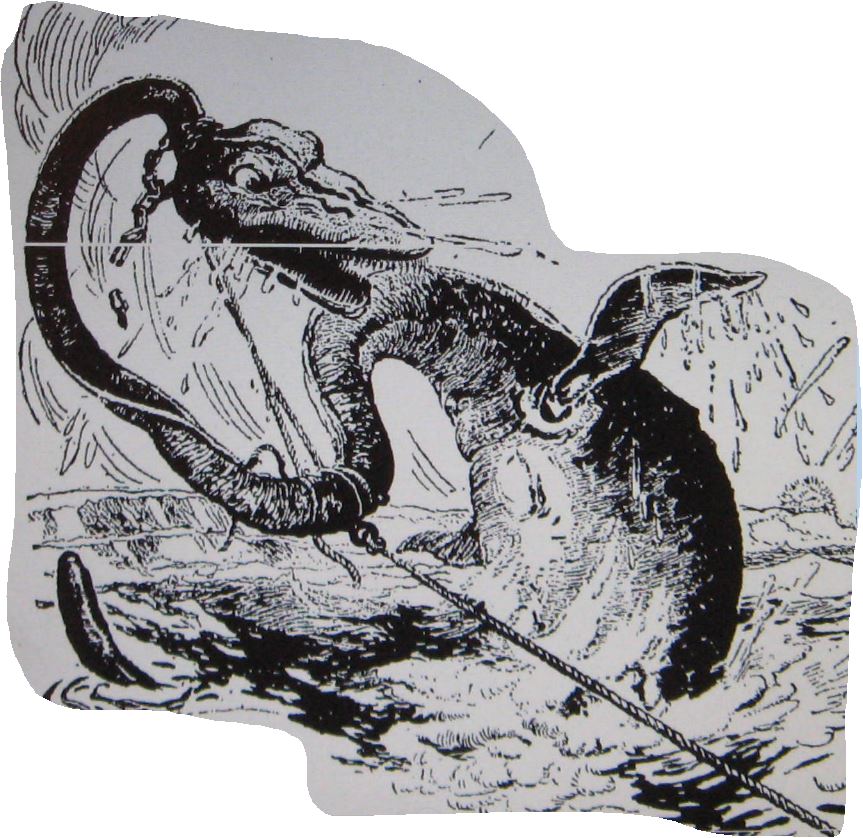 A Dose a Day Keeps Sea Serpents at Bay

Those who sail up along the coast of Norway to trade or to fish, all tell the remarkable story of how a serpent of fearsome size, 200 feet long and 20 feet wide, resides in rifts and caves outside Bergen. On bright summer nights this serpent leaves the caves to eat calves, lambs and pigs, or it fares out to the sea and feeds on sea nettles, crabs and similar marine animals. It has ell-long hair hanging from its neck, sharp black scales and flaming red eyes. It attacks vessels, grabs and swallows people, as it lifts itself up like a column from the water. [Original Latin here.]

This is probably one of those posts that will have cryptozoologists and marine biologists rolling their eyes at me, murmuring, “Old stuff. Been there, done that, bought the life-jacket.”

Nevertheless, the Lake Ontario article was new to me and has one element I don’t think I’ve seen addressed before in the history and habits of sea serpents. We’ll get to that in a moment.

Extract of a Letter from a young Gentleman residing near the Black River, in the State of New-York, to his correspondent in Castleton—dated, “Watertown, June 30th 1805.

“Four men of respectability, who belong to this place, were returning from Kingston, last week, in a boat across Lake Ontario, who, when about half way home, espied a distant object lying off in the Lake; which they supposed to be a boat with her bottom up. They immediately steered towards it, with a design to make a prize of her; when, with the swiftness of an arrow, it darted towards them, and they discovered it to be a monster in the form of a snake. They were dreadfully frightened, and pulled with all their might for the shore, which they soon gained, it being at no great distance. The monster closely pursed them, till gaining shoal water, it played backward and forward before them two hours. This afforded them leisure to recover from their surprise to approach and survey it. It contracted itself in a spiral form, which they judged to be about eighteen feet in diameter. From the centre of the curl, the head projected across the folds, lying even with the surface of the water, and apparently its circumference almost as large as a hogshead—the eye nearly the bigness of a pint basin; the mouth frightfully large, & aspect terrible. The length, as it appeared above water, they judged to be 150 feet. The body appeared to be about the size of a barrel. After playing around, as stated above, he steered his course for a vessel which had left Kingston the same time with themselves bound to Niagara, and was out of sight in a moment.

“I understand that the Indians have frequently seen the same. He once attempted to pick a man out of a schooner who saved himself by jumping into the cabin. A number of boats have been lost in the Lake, which many have conjectured were destroyed by this monster. It is supposed to be of the same kind with that which infested the seas of Norway, as it is not difficult for it, when young, to come up the river St. Lawrence.”

However incredible the above account may appear, the frighted imaginations of these spectators have not represented this monster of a serpent to be of such an enormous size as the sea snake which was shot by the master of a ship in the Norwegian seas in 1756. The length of that, it will be recollected, was more than a hundred yards. The boat and ship-masters in those seas seem to dread being overset by this sea-monster; and, on that account, provide themselves with quantities of castor, as they are known to have a remarkable aversion to the smell of that drug. It is probable that many who cross the Ontario would be happy to obtain a substance equally efficacious for their own security.

I’m not sure if the reference to the sea snake shot in 1756 is a missprint for the following 1746 account. The descriptions of spiral coiling, hogsheads and barrels are frequently found in early sea serpent reports, including the Gloucester sea serpent, as are the notions of a “playing” sea serpent and the speed of the creature.

[I omit the account of the Cape Ann/Gloucester sea serpent.]

After reading this account, we recollected one not altogether unlike it. A Danish Captain of the navy reported that he saw in 1746, near the coast of Norway, a Sea Serpent of very great size and length. The head, which he saw out of water, had some resemblance to that of a horse, and he remarked something hanging from his neck like long black hairs. As he moved at a distance, he looked like a row of large casks, following in a right line. He moved with uncommon swiftness. We plainly see an agreement in these different accounts, and are led to believe that the fish seen at such a distance of time and place, may have been of the same kind. To what size the fish of the northern seas may grow, is not known, but Cepede, comparing a fossil tooth in the family sharks, with those known to belong to the largest known, gives the fish which must have used it, more than double the length of any fish of the family now known. We are pleased to see the excitement which the fish has made, and the determination to take it. We know no men more expert, and we hope they will be rewarded from the bounty as well as curiosity of others, if they succeed. The Danish Captain observed that the Norway fishermen were much alarmed for the safety of their boats, and one of the letters from Gloucester says, our small craft are fearful of venturing out a fishing. Salem Reg.

The boat and ship-masters in those seas seem to dread being overset by this sea-monster; and, on that account, provide themselves with quantities of castor, as they are known to have a remarkable aversion to the smell of that drug. It is probable that many who cross the Ontario would be happy to obtain a substance equally efficacious for their own security.

Castor? As in ill-smelling castor oil?  Or as in some misunderstanding of castor, the Latin word for beaver, an animal which produces a heavy, musky odor? Or as in castoreum, the beaver’s secretion used to mark its territory and also used in perfumery and in 18th-century medicine as a treatment for fever and female troubles. (Olaus Magnus also writes of the habits of beavers, but not, apparently, in the same breath as sea serpents.) I would have thought that “cod-liver oil” would have been more appropriate for Norway, but apparently castor beans have been grown there. I’ve read a lot of books on sea serpents and lake monsters and I simply cannot recall anything about this remedy to ward them off. In fact, the only anti-sea-serpent specific I can think of was St. Columba’s effective command to the Loch Ness monster.

In any case, I thought I would put this out there and see if any of you have seen castor mentioned in other accounts of sea serpents.  Or, if you have any theories about why castor might be effective, seal in an air-tight jar with some baking soda and send to chriswoodyard8 AT gmail.com