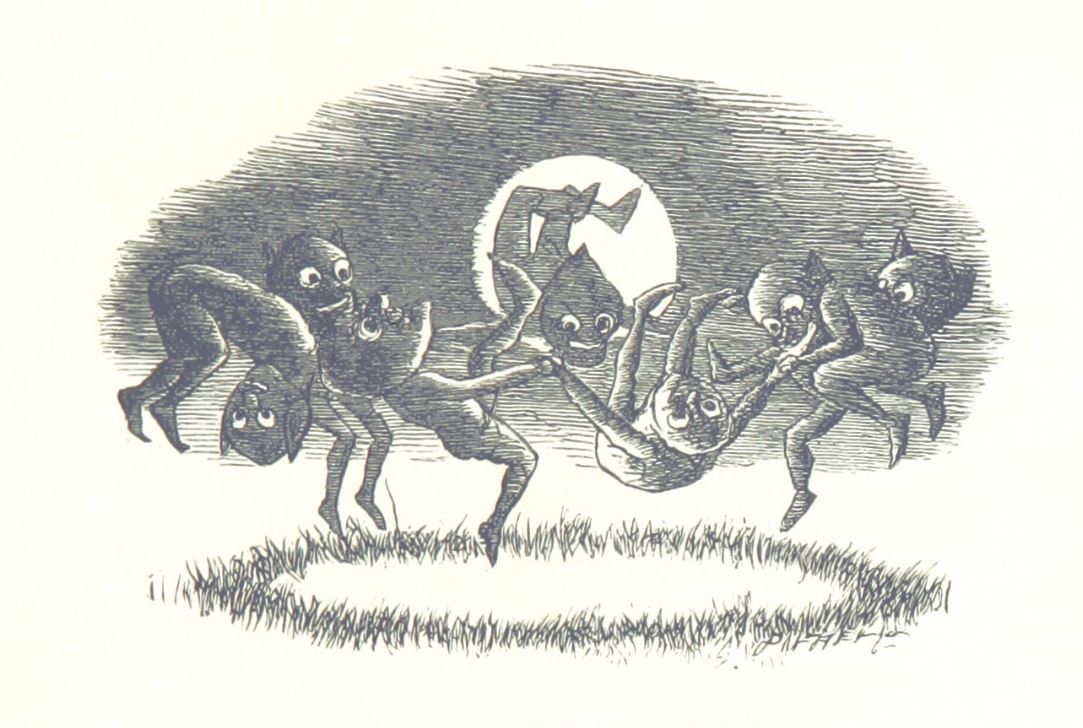 A busy day and a headache, so a brief turn with some dancing fairies from Wirt Sikes and Elias Owen for #NationalDanceDay.

Sikes wrote of the incident in British Goblins:

The Coblynau are always given the form of dwarfs, in the popular fancy; wherever seen or heard, they are believed to have escaped from the mines or the secret regions of the mountains…

That the Coblynau sometimes wandered far from home, the same chronicler [The Rev. Edmund Jones of the Tranch] testifies; but on these occasions they were taking a holiday. Egbert Williams, ‘a pious young gentleman of Denbighshire, then at school,’ was one day playing in a field called Cae Caled, in the parish of Bodfari, with three girls, one of whom was his sister. Near the stile beyond Lanelwyd House they saw a company of fifteen or sixteen coblynau engaged in dancing madly. They were in the middle of the field, about seventy yards from the spectators, and they danced something after the manner of Morris-dancers, but with a wildness and swiftness in their motions. They were clothed in red like British soldiers, and wore red handkerchiefs spotted with yellow wound round their heads. And a strange circumstance about them was that although they were almost as big as ordinary men, yet they had unmistakably the appearance of dwarfs, and one could call them nothing but dwarfs. Presently one of them left the company and ran towards the group near the stile, who were direfully scared thereby, and scrambled in great fright to go over the stile. Barbara Jones got over first, then her sister, and as Egbert Williams was helping his sister over they saw the coblyn close upon them, and barely got over when his hairy hand was laid on the stile. He stood leaning on it, gazing after them as they ran, with a grim copper-coloured countenance and a fierce look. The young people ran to Lanelwyd House and called the elders out, but though they hurried quickly to the field the dwarfs had already disappeared.

But then we find the first-hand story of the same encounter from Edward (rather than Egbert) Williams and it gives a much fuller account, which disagrees with Sikes’s assessment that these were Coblynau/knockers:

It may be stated that Mr. Wirt Sikes, in his British Goblins, refers to the Dwarfs of Cae Caled, Bodfari, as Knockers, but he was not justified, as will be seen from the extract, in thus describing them.  For the sake of reference the incident shall be called–The Elf Dancers of Cae Caled.

The Elf Dancers of Cae Caled

Dr. Edward Williams, under the year 1757, writes as follows:–

“I am now going to relate a circumstance in this young period of my life which probably will excite an alternate smile and thoughtful reflection, as it has often done in myself, however singular the fact and strong the evidence of its authenticity, and, though I have often in mature age called to my mind the principles of religion and philosophy to account for it, I am forced to class it among my unknowables.  And yet I may say that not only the fact itself, but also the consideration of its being to my own mind inexplicable, has afforded some useful reflections, with which this relation need not be accompanied.

“On a fine summer day (about midsummer) between the hours of 12 at noon and one, my eldest sister and myself, our next neighbour’s children Barbara and Ann Evans, both older than myself, were in a field called Cae Caled near their house, all innocently engaged at play by a hedge under a tree, and not far from the stile next to that house, when one of us observed on the middle of the field a company of–what shall I call them?–Beings, neither men, women, nor children, dancing with great briskness.  They were full in view less than a hundred yards from us, consisting of about seven or eight couples: we could not well reckon them, owing to the briskness of their motions and the consternation with which we were struck at a sight so unusual.  They were all clothed in red, a dress not unlike a military uniform, without hats, but their heads tied with handkerchiefs of a reddish colour, sprigged or spotted with yellow, all uniform in this as in habit, all tied behind with the corners hanging down their backs, and white handkerchiefs in their hands held loose by the corners.  They appeared of a size somewhat less than our own, but more like dwarfs than children.  On the first discovery we began, with no small dread, to question one another as to what they could be, as there were no soldiers in the country, nor was it the time for May dancers, and as they differed much from all the human beings we had ever seen.  Thus alarmed we dropped our play, left our station, and made for the stile.  Still keeping our eyes upon them we observed one of their company starting from the rest and making towards us with a running pace. I being the youngest was the last at the stile, and, though struck with an inexpressible panic, saw the grim elf just at my heels, having a full and clear, though terrific view of him, with his ancient, swarthy, and grim complexion.  I screamed out exceedingly; my sister also and our companions set up a roar, and the former dragged me with violence over the stile on which, at the instant I was disengaged from it, this warlike Lilliputian leaned and stretched himself after me, but came not over. With palpitating hearts and loud cries we ran towards the house, alarmed the family, and told them our trouble.  The men instantly left their dinner, with whom still trembling we went to the place, and made the most solicitous and diligent enquiry in all the neighbourhood, both at that time and after, but never found the least vestige of any circumstance that could contribute to a solution of this remarkable phenomenon.  Were any disposed to question the sufficiency of this quadruple evidence, the fact having been uniformly and often attested by each of the parties and various and separate examinations, and call it a childish deception, it would do them no harm to admit that, comparing themselves with the scale of universal existence, beings with which they certainly and others with whom it is possible they may be surrounded every moment, they are but children of a larger size.  I know but few less credulous than the relator, but he is no Sadducee.  ‘He who hath delivered will yet deliver.'”

My friend, Mr. R. Prys Jones, B.A., kindly informs me that he has several intelligent boys in his school, the Boys’ Board School, Denbigh, from Bodfari, and to them he read the preceding story, but not one of them had ever heard of it.  It is singular that the story should have died so soon in the neighbourhood that gave it birth.

To be honest, I’m not a fan of Morris dancing. It always looks to me like the rites of a secret fraternal order being publicly enacted in slow-motion. No doubt significant in a darkened lodge room, but rather embarrassing in broad daylight. Handkerchiefs flourished in the hand are a common Morris-dancing accessory, but I’m not knowledgeable enough about the various costumes to know if this red coat and spotted handkerchief livery will be recognized by any aficionados. It may or may not be relevant to note that some Morris-dancing groups black their faces, that the name “Morris” may derive from “Moorish,” and that Sikes mentions a bit later in his book that the Coblynau “are black or copper-coloured in face as well as dress.” [p. 133] The Coblynau were almost always associated with mining, so that may be why they have dark/swarthy faces and yet the eye-witness disagrees that these were “knockers.”

Edward Williams says they were more like dwarfs than children.  Sikes writes: “they were almost as big as ordinary men, yet…had…the appearance of dwarfs.” Does this suggest that these were actual Morris dancers, stuffed or padded or otherwise guised in a grotesque manner?   Or, as if the horrors of the fairy ring were not bad enough, had the Gentry taken up Morris dancing?

Floodmouse disagrees with my assessment of Morris dancing and has an ingenious theory about its origins: