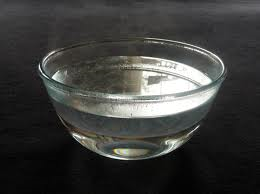 Muddying the Waters: The Mediumship of Mrs. Blanchard

Previously in this blog we have looked at scrying for the French king’s death in a glass of water and a panorama of spectral images rippling in the depths of a Virginia well. There are many kinds of methods of divination using water: dripping wax or metal or egg white into water, or looking at raindrops or ripples. It’s an essential ingredient in reading the tea leaves. But it is always entrancing to find a new wave in mediumship, as in this account of Mrs. Elizabeth Blanchard of New Ulm, Minnesota and her mystical faces found at the bottom of bowls of water. What is intriguing about Mrs. Blanchard’s work is that while her technique resembles tasseomancy, the only results she got were faces, rather than the variety of symbols you’d find at the bottom of a tea cup.

To the Editor of the “Spiritual Magazine.”

Dear Sir,—Some months ago I received from a gentleman in the United States, three photographs of spirit-pictures, produced by a very curious form of mediumship; and as I think the account will be interesting to all Spiritualists, I will give the extract from his letter:—

“Mrs. L. Blanchard (of New Ulm, Minnesota), the medium for the peculiar phase of the production of faces and likenesses in the ordinary sediment of water, died, as I perhaps told you in my last, in January. I saw her two weeks before she passed away, and was much struck with her goodness and gentleness. She made the discovery by accident, or the gift came to her suddenly; for after washing her hands in a bowl of rain water the sediment, to her great astonishment, settled into the perfect semblance of a face, startling her and her husband by its naturalness. From that time, until within a few weeks of her death, the faces continued to form, and by drying out the water by the natural process of evaporation, the sediment remained fastened to the bottom of the dish, and the face or faces (for there were sometimes hundreds in the bowl) could be photographed, although on account of the water being gone, the best appearance was lost. Some were artistic, and so life-like when the water was on them that you could not help starting back in surprise. Unfortunately, as, too often happens, the gift fell into surroundings where the importance of the same was not at all appreciated, and hundreds of the bowls were destroyed after the first novelty had worn off, thus only a few, and those the poorest, were left that I could obtain to photograph. Three were standing in her room the day I saw her, which were beautiful indeed, and she told me I might have them when the water had dried out, for they could not be carried or moved before, as, while the water was on them, the slightest jar would cause the sediment to float about the dish and destroy the image. She was then quite sick, and expressed a desire to die. From her childhood she had been a cripple—never perfectly well, and she was I think to be excused if life seemed to her a burden at times. I did not think she was then on her death-bed, and was consequently much shocked to hear of her decease not long after my visit. To produce the pictures, her method was simply to agitate the water with her finger tips for a moment, and immediately the deposit assumed the forms, faces, &c.; and on being again stirred about by her would assume other and different faces. Her death was a severe loss. I telegraphed up to her husband when I heard of it for the promised bowls, but to my great regret, he answered that during her illness they had had to be moved and were thus destroyed: this lady was also a spirit-artist, and under influence drew beautiful and correct likenesses of many departed ones.—Please accept the enclosed with my compliments.”

The three pictures he sent me differ much from one another: the first is a female head fully an inch and a quarter in length, with the features very distinctly formed. The second is a man’s face (about four-fifths of an inch,) and the head seems to be crowned with flowers, but upon examination, they prove to be formed of smaller faces, while one child-like face rests against his cheek. The third picture consists of a cluster of small faces, which remind me of Miss Pery’s very interesting spirit-drawings, and although they have not the exquisite delicacy of her pencil work, they have much force and character. As several of my friends are desirous of possessing copies of these spiritual curiosities I have had them reproduced by a skilful photographer, and shall be happy to forward the set of three for half a crown’s worth of stamps to any of your readers who may wish for them.

My first thought when I received them was that I should like to obtain the same class of mediumship, but, although in my power, it was deemed inexpedient by my invisible counsellors, who however agreed to my having an experimental séance during a few days’ visit that I was about to make to Mr. [Edward T.] Bennett of Betchworth. He accordingly found enough sediment in the various jugs of rain water to make a fair amount of deposit in a large wash hand basin, round which we stood—a circle of seven—with our finger tips resting on the edge. I was then impressed to stir the water briskly with my fingers, and we watched it gradually settle down, until it certainly assumed the appearance of some small faces, but only one was really clear, and that (which was the likeness of my brother Warrand) was on the slope of the basin just in front of me. In consequence of the position it could only be distinctly seen by myself, but judge of our surprise when we felt the basin being gently moved round under our fingers thus to exhibit the picture to each person in succession.

Believe me, yours sincerely,

Georgiana Houghton herself did “spirit paintings” in water colors, exhibiting some 155 of her works at a British gallery in 1871. Her paintings, painted while in trance, have a very modern feel to them—also more than a whiff of “outsider art.” She never married and died in genteel poverty. Today she is more likely to be remembered for the spirit photos she took in multiple sittings with Frederick A. Hudson.

Miss Pery, of the “very interesting spirit-drawings” was an aspiring medium who, to judge by subsequent accounts in Houghton’s book, had a bit of a “pash” on Georgiana Houghton. Here is a description of Miss Pery’s work:

In the July of that year, I had received a letter from Miss Pery, a lady unknown to me, residing in the Netherwood Road, Hammersmith; saying that her hand had been guided by invisible agencies to do some curious drawings, and she had been told by a friend that I might possibly be able to give her some light on the subject; which led to occasional correspondence between us; she afterwards sent me one of her drawings to look at, and very beautiful it was, being executed in pencil with most extremely fine work, representing a multitude of small heads and faces, highly finished, and closely grouped together, there being sometimes a glimpse of a hand or a foot: there were also small crosses, and such other symbolism. Evenings at Home in Spiritual Séance, Georgiana Houghton,1882

The water from rain barrels was often used for special purposes: it was believed to be purer than well water and its softness made it good for the skin and for washing delicate items. The sediment mentioned would have been whatever washed down the drainpipe, although one would think that water scooped from the top of the barrel would have been clear. Dr. Horace Newhart, a Minnesotan oto-laryngologist, collected information about Mrs Blanchard long after her death and shared it with Frederick Bligh Bond who discussed her work in Psychic Research (October 1930). He says that she stirred together clay and water in shallow bowls, rather than “sediment.”

Mrs Blanchard’s technique also reminds me of the Biblical Pool of Siloam:

“For an angel went down at a certain season into the pool, and troubled the water: whosoever then first after the troubling of the water stepped in was made whole of whatsoever disease he had.” John 5:4.

In agitating the water with her fingertips was the invalid Mrs. Blanchard possibly trying to replicate the Biblical healings?

There is surprisingly little available about Mrs. Blanchard in the standard Spiritualist histories. Her husband Albert was a local businessman, politician and judge. She died in 1876, at the age of 35. Does anyone have more information on this lady or perhaps an online source for the Bligh Bond article in Psychic Research?

Precipitate, please, to Chriswoodyard8 AT gmail.com

For more strange ghostly, historical, and Fortean tales, please see my Ghosts of the Past series here or at Amazon. The most recent title is The Ghost Wore Black. Other titles, which focus on Ohio forteana and ghosts are The Face in the Window and The Headless Horror, both of which are available on Amazon and other online retailers. Five of the Haunted Ohio series and all three of the Ghosts of the Past series are also available in Kindle editions. And join me for daily Fortean links from around the globe on Facebook at Haunted Ohio by Chris Woodyard.