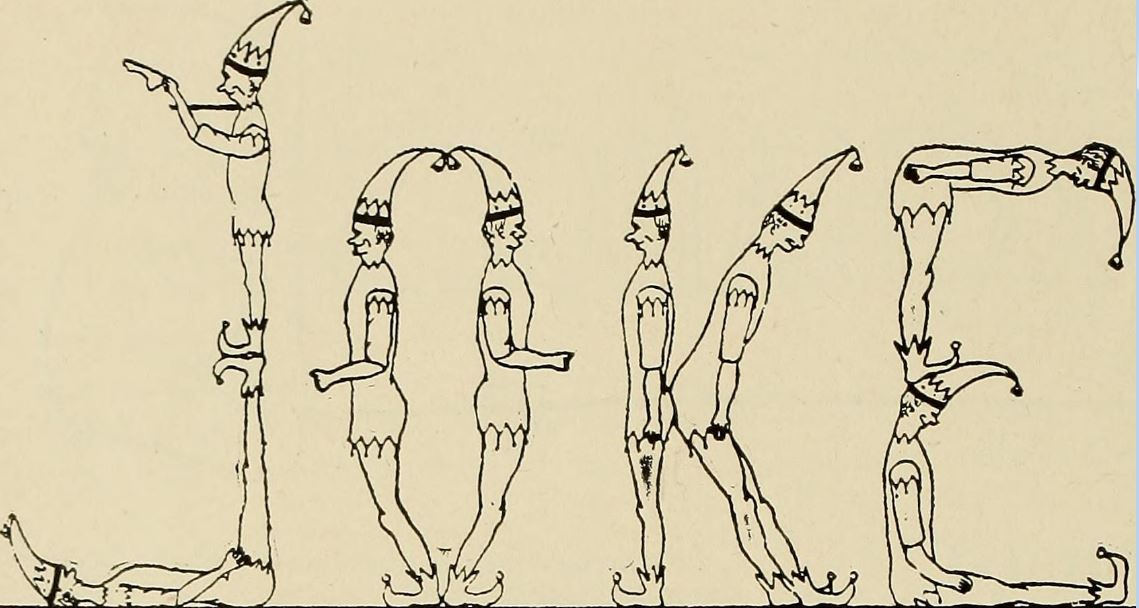 Today, I am reliably informed, is “Tell an Old Joke Day,” one of those whimsical holidays of doubtful origin, which you find posted online with bad clip art.

(Incidentally, who creates these “holidays?” Is there a PR campaign for a movie or band album tour behind this one? Was it intended to raise funds for The Home for Superannuated Jokes or the relief of old vaudeville comedians?)

Whatever the reason “Tell an Old Joke Day” exists, it is a holiday I can celebrate in good conscience, for, if you’ve followed this blog for any length of time, you may have noted posts on the somewhat unsavory  mirth, which passed for wit in the vintage press. As an historian I love Victorian jokes for their cliches and for their unexpected banana peel moments. Some of them make me laugh out loud; others make me flinch. If I want to get all serious and historian-ish, I could say that they offer a view of the cultural assumptions of the period at the most basic level. But on such a holiday, that would be silly…. Just break out the red noses and whoopee cushions for some stand-up from the tasteless humorists of the past, interlarded with a few of my favorite old jokes and cartoons.

Perhaps one of the most offensive subjects for Victorian jokes was hangings–judicial or otherwise– found here in “Choking with Mirth: Gallows Humor.”

The move from noose to electric chair did not put a stay on execution jokes:

“Is there anything you would like to do before I press the button?” said the warden of Sing Sing to the murderer in the electric chair.

Hilarity could easily be extracted from accidental death

Pastor (preaching a funeral sermon): “The fate of the unfortunate woman, whose mortal remains lie before me, should be a warning to all fashionable young ladies. She died from the baneful effects of hair-dye.”

Kentucky citizen (who happened to be in the congregation, shaking his head solemnly): “That’s so. It’s always best to look at the label before drinking. Laughter: A Weekly Budget of Mirth, Wit and Humour, Vol. 1, 1890: p. 253

While railway disasters were always good for a chuckle:

The train from Paris to Brussels had got as far as Erquelines, when a stout gentleman, by way of breaking the ice, remarked to his fair travelling companion, “Steam is a grand invention, madame?”

“Yes, indeed; I owe to it my whole fortune.”

“Oh, yes; I have lost all the members of my family in succession through railway accidents.”

Of course, some of my favorite jokes and cartoons are on the theme of mourning practices: 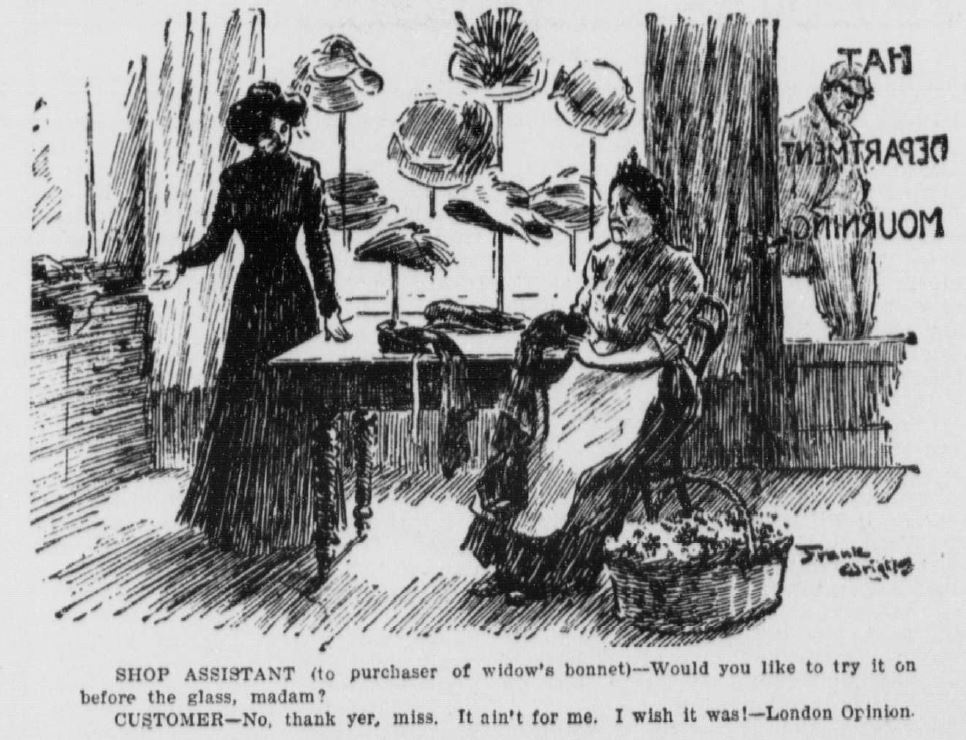 Shop Assistant: (to purchaser of widow’s bonnet) Would you like to try it on before the glass, madam?”
Customer: No thank yer, Miss. It ain’t for me. I wish it was!
Los Angeles Herald 19 December 1909: p. 100 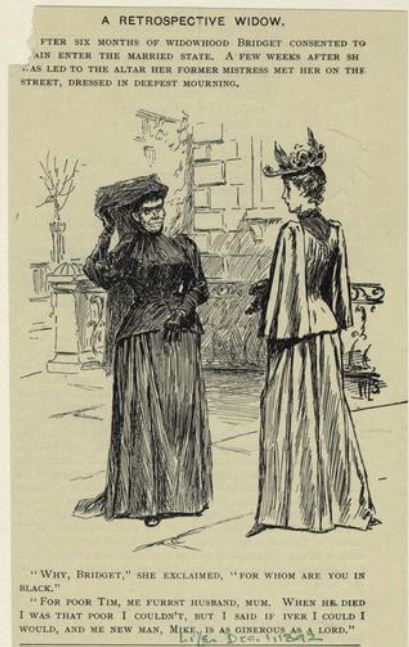 A Retrospective Widow
After six months of widowhood Bridget consented to again enter the married state. A few weeks after she was led to the altar, her former mistress met her on the street, dressed in deepest mourning.
“Why, Bridget,” she exclaimed, “for whom are you in black?”
“For poor Tim, me furrst husband, Mum. When he died I was that poor I couldn’t, but I said if iver I could I would, and me new man, Mike, is as ginerous as a Lord.”
1892 New York Public Library

“Waiter, what is the matter with this establishment? This steak is burnt black.”

One of my favorite cartoons is this one, from 1928. 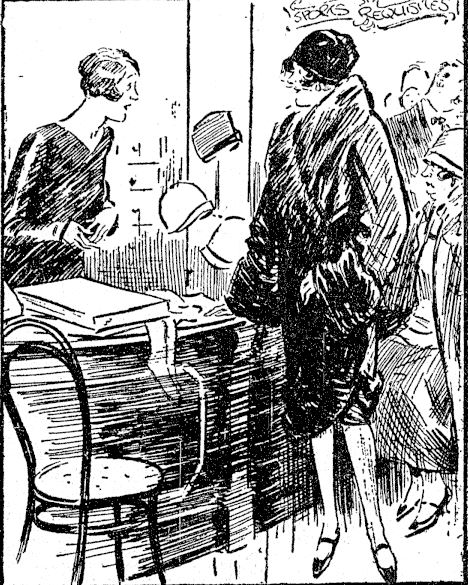 But if you find puns and word-play painful, look away now:

*”I fear ” — said the manager of the dime-museum, as the living skeleton sat on him and intermittently hammered him — “I fear my curiosity has got the best of me.” — Indianapolis Journal 1898

A fond wife threw a bottle of hair renewer at her husband’s head, at which he exclaimed: “We must part—the dye is cast.” Providence [RI] Evening Press 9 June 1870: p. 4

Bartholomew Binns, the English hangman, has been dismissed for drunkenness. A hangman should not indulge in a “a drop” outside of his profession. But Binns liked the “flowing bowl,” and couldn’t gibbet up. Kentucky Advocate [Danville KY] 16 February 1877: p. 1

Spiritualists (along with widows, drunkards, mothers-in-law, boarding-house landladies, servants, and people of various ethnic groups, creeds, and colors) were the subject of ridicule in the (non-Spiritualist) papers. This post, called “Just Medium:” Spiritualist Humor and Satire, raps the zany goings-on of the seance room.

Barbers were another target of humorists:

*“Why do you insist upon telling me these horrible stories of ghosts and robbers while you are cutting my hair?” said a long suffering customer to a talkative barber.

“I’m very sorry, sir,” replied the barber. “but, you see, when I tell stories like that to my customers their hair stands on end, and it makes it ever so much easier to cut.” Idaho Statesman [Boise, ID] 17 March 1918: p. 9

During a trip through Ireland, a New Yorker one day found himself without his razors, which were in a hand-bag he had left behind at the hotel where he had stopped the day before. He accordingly told the landlord to send him a barber. The landlord was doubtful if there was a man in the village who could serve him, but presently sent up a man who expressed his willingness to undertake the job. The New Yorker decided to risk a gash or two.

“Well, sir,” said the amateur barber, after a little hesitation, “will you please to lie down flat on your back, while I shave you, sir?” Thinking it was probably a custom of the country, the New Yorker stretched out comfortably on his back, and nearly went asleep while the fellow shaved him, so light was his touch. When he had finished, the New Yorker arose and said: “I am curious to know why you asked me to lie down to be shaved?” “Because, sir” was his ingenious reply, “I never before shaved a live man, sir.” The Argonaut 11 April 1898

Had enough? I’ve saved the “best” for last–the designation of “best” or “utterly tasteless” will depend on your sense of humor–in this post on “Cholera Jokes.”

Since I wrote this post, I found a couple more on the subject, although not terribly good ones:

Widow Grizzle’s husband lately died of the cholera. She remarked to him while writhing in agony: “Well, Mr Grizzle, you needn’t kick round so and wear the sheets all out, if you are a’ dying!” Weekly Oregon Statesman [Salem OR] 10 November 1855: p. 1

It is an age of fraud. The cases of Asiatic cholera in Iowa were not genuine. They were made of green cucumbers and beer. Weekly Oregon Statesman [Salem OR] 27 August 1886: p. 4

I will point out that the jokes found here and in the links are actually relatively benign in the scheme of Victorian humor. My files are filled with some truly savage jokes, which I’ve been reluctant to inflict upon a sensitive world. But perhaps they will see the light of day when we all could use a good cheering-up.

I offer a single, painful example:

There is still another point in favor of narrow-gauge railroads. When the locomotive runs over a man, two-thirds of the body is left in a good condition for identification. Milan [TN] Exchange 7 January 1875: p. 1

I’ll be here all week.

Got a favorite Victorian/Edwardian joke? Send your Punch-lines to Chriswoodyard8 AT gmail.com