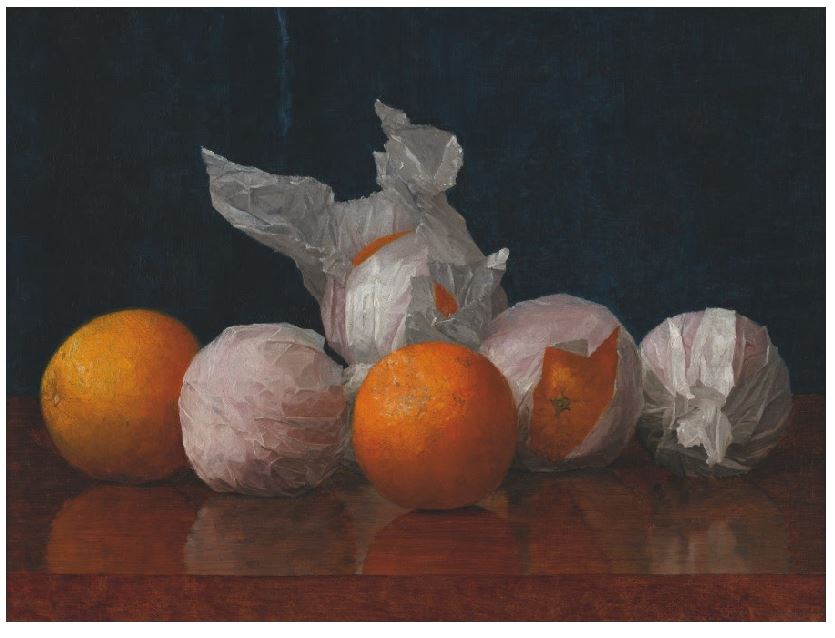 I will state frankly that I do not like the color orange. It does not suit me in clothing or décor; it seems shrill and ill-tempered, and, worst of all, is utterly unrhymable in the English language. The color also, surprisingly, for a hue associated with hell-fire, does not often appear in the ghost canon. Orange is emphatically not the new black: there are no veiled “Women in Orange” haunting village streets or Habsburg palaces. When the color makes a rare appearance, it is usually in the guise of a spook light as we see in these two examples:

MEN WITH RIFLES HUNT FOR GHOST

Many Attempt To Solve Riddle of Red-Orange Ghost Light Which Moves Over Prairie.

Tulsa, Okla. (INS) They have stalked it with Winchester rifles, and have tracked it thru the graveyard and streets of the deserted village of Old Ruby, but “they” which includes numerous newspapermen, and dozens of ghost detectors from this city have not solved the riddle of the red-orange ghost light that moves over the prairie of the most thinly settled section of Nowata county.

Mac A. Hawkins, skeptic writer of the Tulsa World, attempted to lay the uneasy light wraith, and came to the conclusion that the mystery was beyond his powers.

The Rev. W.J. Scantling, pastor of the Christian Union Church has attempted to solve the light and failed.

Hawkins describes his view of the phantom:

“An orange red glow that did not throw any reflection, such as an automobile headlight might have been thrown. To the watchers it was visible below a small catalpa tree at the graveyard entrance, so it must have been close to the ground.

“Lon Bryant and one of the other reporters rushed to the cross roads. There was nothing to be seen—a light shower that had settled the dust had made it perfectly impossible to see any tracks that might have been made but there were none.”

So the spook of Old Ruby will continue to wander through the deserted streets and caper in its playground at the graveyard until someone finds an explanation of its existence.

This is one of those stories that was widely syndicated, but had no follow-up or solution.  Initially I couldn’t find “Old Ruby” in the list of towns or ghost towns of Oklahoma, but at last located it at this site, where it is called simply “Ruby” and is described as “10 miles east of Nowata, 3 miles north on road 424,” should you wish to go spook-light hunting.

Our neighbors to the north also had an elusive orange spook light and one that got a little too close for comfort.

[Special to The Winnipeg Tribune.]

All efforts to clear up the mystery which surrounds the “orange ghost,” an uncanny light which frequents the vicinity of South Valley, a district about 38 miles east of Prince Albert, have failed.

One of the numerous parties of ghost seekers which have visited the territory in which a weird ball of yellow light is casting a cloud of superstitious fear over several communities, trailed to its lair a distant glow, which they presumed was the celebrated ghost, only to find they were pursuing a man with a lantern.

Dark nights in the South Valley district find numbers of automobiles proceeding slowly through inky trails hemmed in on all sides by poplar and pine, with lights out—waiting for the ghost to appear.

One disdainful motorist knocked at the door of Mr. Halverson’s homestead, one of the “haunted” homes and inquired for the ghost. Mr. Halverson, who opened the door, replied, “Look behind you.” The ghost was perched on a pine tree a few yards distant.

One of the characteristics with which the orange spectre is credited is that of rapid flight. No one has ever been able to catch it.

After following three young men home from a dance, the light stopped in the farmyard, and the boys called their father to see it. As he approached the light which usually travels about four feet above the ground, it vaulted high into the air and disappeared over the south branch of the Saskatchewan river.

Four farmers in the district are said to have given up their homes because the ghost haunted them.

Dogs, horses and cows stand like statues when it comes near.

A woman driving home the cows one evening, encountered the orange light at the entrance to the barn. The cows and her trusted dog froze in their tracks for a few moments, and when the spectre vanished they jammed the barn door in their haste to get inside. The woman said the light was so bright she could see the mosquitoes on the cows.

Motorists with one headlight burning don’t travel in South Valley any more. One night a driver mistook the orange ball for a car with one lamp burning. The light came on, stopped, and settled on the running board of his auto.

It is expected that shotguns may figure in similar encounters with the mysterious light in future.

South Valley people are convinced the ghost is a supernatural phenomenon, and urge visitors “not to monkey with it.”

Although the ghost has never harmed anyone, lone travellers who meet it are bringing northern Saskatchewan to the fore in the matter of the next Olympic speed trials.

The orange ghost is believed to have patrolled a beat of many miles for about 17 years. There are numerous stories as to is origin, involving several murders, the violent death of a Jewish peddler on a lonely road, and other weird stories.

Sometimes the ghostly light is the size and shape of a large salt shaker. At others it is as big as a cart-wheel. Sometimes whiskers adorn its surface. Winter weather is no obstacle to it.

The most plausible explanation so far offered for the solution of the orange ghost mystery is that gas escaping from some of the bogs in the vicinity, together with an effervescent imagination on the part of the district residents, is responsible for the “visitation.”

Most of the residents of the South Valley country have seen the ghost and several of the amateur ghost hunters have encountered it recently.

If you are one of a party which has not had the privilege, the ferryman at Bindon’s, about 30 miles east of this city, will tell you the ghost isn’t partial to crowds.

The long lines of automobiles trying to catch a glimpse of the ghost remind me of the traffic jam created by the Phantom Light of Deakin’s Woods in Columbus Grove, Ohio in 1924 and the light settling on the motorist’s running board suggests the cozy proximity of the Burbank Bat Light.

Once again, we find a spook light of long standing, but no theories except those well-worn chestnuts: a murdered peddler and “bog gas.”  I will point out that Saskatchewan and Oklahoma are both rich in oil and natural gas. Oil country often seems to have more “paranormal” activity, particularly luminous apparitions.

But I’m disappointed to report that these two cases are the extent of my orange ghosts.  There was an “Orange Phantom” motorcyclist baffling the police in Orange, California, 1976, but he turned out to be just a daredevil in an orange helmet on a fast bike.  It runs in my mind that there is some regional monster: a man exposed to radiation, whose skin or eyes turned orange, but…

Other orange (or perhaps pumpkin spice) ghosts? chriswoodyard8 AT gmail.com