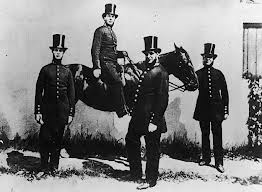 Yesterday marked the beginning of the Chinese Year of the Horse. Equine phantoms are–well–the workhorses of  ghostly literature: Headless horsemen, the Wild Hunt, Death Coaches, and, of course, the ubiquitous ghostly highwaymen, all rely on spectral steeds for their dash. Today we celebrate the Year of the Horse with a rather more mundane pale horse and pale rider in an unnamed Canadian city.

A Phantom Horse and Policeman

According to one of my correspondents, Mr. T—- P—-, a comparatively modern phantom rider has been seen in Canada. Writing to me from C—-, where he lives, he says: “It is stated that this town is periodically haunted by the phantom of a tall, fair policeman mounted on a white horse and clothed in the uniform of the ‘forties–namely, tail coat, tight trousers, and tall hat. His ‘phantom’ beat extends from a gateway at the commencement of Cod Hill, along the Park side of Pablo Street to Sutton Street, and Adam Street, down Dane Street, and back, through Pablo Street, to the gateway on Cod Hill.”

A gentleman, well known in the art world, who, in order to avoid publicity, wishes to be designated Mr. Bates, gave me his experience of the phenomena as follows:

“Yes, I have seen the ghostly policeman and his milk-white horse. I was walking along Pablo Street on the Park side, one grey afternoon in November, with the express intention of meeting a friend at my Club in Royal Street, when to my surprise, just as I was about a hundred yards from the gateway on Cod Hill, I was overtaken by a tall, fair-haired man, riding a white horse. He was so dressed that I stared in astonishment. He was wearing the costume of seventy or eighty years ago, and reminded me of the policemen in Cruikshank’s illustrations of Dickens. I was not frightened, because I thought he must be someone masquerading; and, in my curiosity to see his face, I hastened my steps to overtake him. I failed; for although he appeared to be riding slowly, hardly moving at all, I could not draw an inch nearer to him. This made me think, and I examined him more critically. Then I noticed several things about him, that, at first, had escaped my notice. They were these: (one) that although he was mounted he was wearing walking clothes–he had on long trousers and thick, clumsy boots; (two) that his ears and neck were perfectly colourless, of an unnatural and startling white; (three) that despite the incongruity of his attire, no one but myself seemed to see him. On he rode, neither looking to the left nor to the right, until he came to Sutton Street, when, without paying the slightest attention to the traffic, he began to cross over. There were crowds of vehicles passing at the time, and one of them rushed right on him. Making sure he would be killed, I uttered an ejaculation of horror. Judge, then, of my amazement, when, instead of seeing him lying on the ground, crushed out of all shape, I saw him still riding on, as leisurely and unconcernedly as if he had been on a country road.

THE VEHICLE HAD PASSED RIGHT THROUGH HIM.

Though I had hitherto scoffed at ghosts, I was now certain I had seen one, and suddenly becoming conscious how very cold it was, I tore on, not feeling at all comfortable till I had reached the warm, cheery, and thoroughly material quarters of my Club.”

To corroborate the evidence of “Mr. Bates,” I append a narrative given me verbally by Miss Hartly, who, like Mr. Bates, had, up to the time of her experience, posed as a pronounced and somewhat bitter sceptic. She was an emphatic freethinker, and had then no belief whatsoever in a future life. Now she believes “a sight” more than most people. “One afternoon, in February, 1911,” she stated, “just as twilight was commencing, I left the Park, where I had been exercising my dog, and turning into Pablo Street, made for Bright Street. At the corner of Wolf Street I saw something so strange that I involuntarily halted. Riding slowly along on a big white horse, a few paces ahead of me, was an enormous policeman in the quaint attire of the ‘forties–top hat, tail coat, tight trousers, just as I had so often seen portrayed in old books. He was riding stiffly, as if unaccustomed to the saddle, and kept looking rigidly in front of him. Thinking it was someone doing it either for a joke or a wager, I was greatly tickled, and kept saying to myself, ‘Well, you are a sport, an A1 sport.’ I tried to catch him up, to see how he made up his face, but could not, for although the horse never seemed to quicken its pace–a mere crawl–and I ran, it nevertheless maintained precisely the same distance in front of me. When we had progressed in this fashion some hundred or so yards, I perceived a City policeman advancing towards us.

“To my intense astonishment, however, neither even as much as gave the other a fleeting glance, but passed by unmoved, and, to all appearance, wholly unconscious of each other.

“A few yards further, I espied a negro looking intently in a store window. Just as the strange policeman came up to him, he gave a violent start, turned round and stared at him, gasped, his cheeks ashy pale, his eyes bulging, made some exclamation I could not catch, and, dashing past me, fled. Then, and not till then, did I begin to feel funny. Further on still we came to a crossing. A carriage and pair with a coronet on the panels of the door was standing waiting. Directly the policeman approached, both the horses reared so violently, they all but threw the coachman off the box. One of the men cried out, ‘Heavens, Bill, what’s that?’ But the other and older of the two, who was clinging to the reins with all his might, merely swore.

“Convinced now that I was on the trail of something not human—something in all probability superphysical, and, impelled by a fascination I could not resist, I followed.

“At the top of Wolf Street the policeman paused, then crossing slowly over, turned into Dane Street, down which he continued to ride with the same mechanical and automatic tread. At length, when within a few feet of a certain shop, over which is a flat that has long borne a reputation for being haunted, the horse came to a dead halt, and horse and rider, veering slowly round, looked at me. What I saw I shall never forget. I saw the faces of the DEAD–the LONG SINCE dead. For some moments they confronted me, and then–vanished, vanished where they stood. I saw them again, under precisely the same conditions, two days later, and I have seen them once since. I am not an imaginative or highly-strung person, but am, on the contrary, exceedingly practical and matter-of-fact, no better proof of which I can give than this fact–I am engaged to be married to a Quebec solicitor!”

This interestingly modern (early Victorian as opposed to 18th-century) apparition follows the pattern of many other road ghosts: he appears to be moving slowly, but cannot be reached by the witness and his face is not visible–at least until he chooses, shockingly, to reveal it. See my posts here http://wp.me/p3gOGE-Rs and here http://wp.me/p3gOGE-U4  for more road ghosts. There is also a chapter on the subject in The Ghost Wore Black.

Any thoughts on which city this might be? I’m not having any luck matching the very specific street names to Cambridge, Cornwall, Courtenay, or Calgary. And what’s the allusion to a Quebec solicitor? Were they noted for their pragmatic and sceptical natures? Chriswoodyard8 AT gmail.com