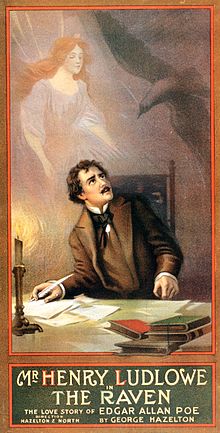 The Pen From Poe’s Coffin A poster for George Hazelton’s play The Raven.

In honor of the death of Edgar Allan Poe on this date in 1849, a tale about a macabre artifact from Poe’s tomb.

The Weird Antics It Played on the Author of a Novel

As weird and uncanny as one of Poe’s own stories of melancholy mystery is the tale of the haunted “Poe pen” with which George Hazelton, a New York lawyer, began to write a novel of the poet’s life called “The Raven.”

He was obliged to abandon the task on account of the unpleasant way the pen had of scribbling apparently meaningless word.

Mr. Hazelton, who does not believe in spiritual manifestations or ghost stories, will tell you, if you are fortunate enough to find him in a communicative mood, how the pen was made from the headboard of Poe’s first coffin and presented to him by the wife of the editor of a Baltimore newspaper, who was present when Poe’s body was removed from its shabby old coffin and placed in a new casket, in which it now reposes.

He also will tell you that out of consideration for the lady who gave him the penholder he tried to use it, but could not accustom himself to the uncanny associations connected with it.

Instead of inspiring him, it exerted a baleful influence over his thoughts and was guilty of weird pranks and hostile attempts to prevent him from writing.

In the glare of sunlight that flooded Mr. Hazelton’s office on Broadway I had a long talk with the disciple of the melancholy genius.

There is a striking likeness between Mr. Hazelton and the portraits of Poe. For instance, the mournful dark eyes and the long jet black hair that emphasizes the yellowish pallor of the novelist’s face.

It almost might be Poe himself were it not for the starched collar, smart four-in-hand tie and brown business suit.

“It is quite a long story,” Mr. Hazelton said, “but if it will interest you I will tell all about the pen, only omitting the name of the lady who gave it to me.

“The pen was made from the headboard of Poe’s first coffin after his remains were transferred from the old coffin to a new one, almost 35 years ago.

“There were only two or three persons present when the coffin was exhumed, among them the editor of a Baltimore newspaper. As the coffin was lifted out of the earth the headboard crumbled and fell to the ground, disclosing all that remained of one of America’s greatest geniuses.

“A gentleman picked up the fragments of the headboard and distributed them among those present. The editor took his share home to his wife. The bit of wood was just big enough to make a penholder and the idea struck the lady to have it made into a penholder and preserve it as a relic.

“Fearing that the wood might be changed if she did not superintend the whole proceeding, the lady went herself to the carpenter’s and later to the jeweler’s and saw the whole operation until the pen and the little silver penslip were complete.

A long time after that the pen came into my possession. It was when I first started to write my book that the lady, who is a very dear friend, asking me one day, when I was visiting Baltimore, if I would not like a penholder made from Poe’s coffin.

“She expressed the belief that the pen, on account of associations, would lend inspiration to me for my work, called “The Raven,” on which I was then engaged. I thanked her and promised to use the pen constantly.

“I began with merely writing the number of the chapter at which I was at work at the head of the blank page of manuscript. One night I was using the pen when suddenly I noticed the word ‘Eronel’ written through Chapter I. I looked again and put it down to the mischievous writing of a child or servant.

“I took a fresh sheet of paper and started to write “Chapter” at the head of it, when, almost before my eyes, the pen, of its own accord, wrote the name mysterious word ‘Eronel.’ I rubbed my eyes.

“The pen had gone dry. I dipped it into my inkwell, determined that the bit of wood should not bet the better of me again. Once more I started to write, this time pressing so hard on the holder that the pen sputtered frightfully, spattering my white shirt front with what appeared to be red ink, although I had none on my desk and never use it. Even as I looked it faded out of my sight.

“It all sounds absurd now, and since then I have had many people explain it away, as in fact I have tried to do myself. It was useless, however to try to write with the pen, for every time it repeated its uncanny tricks, until for the sake of the novel I gave up in despair.

“I couldn’t waste all my time on a stupid pen that refused to write anything but the word ‘Eronel,’ and, as for helping me to think, it worked quite the contrary.”

“But what did ‘Eronel’ mean?” I asked Mr. Hazelton, fearing that the story had stopped and I was to be left in doubt as to the import of the mysterious message.

“Well, I am coming to that,” Mr. Hazelton assured me, laughingly. “I kept the two sheets of blank paper and called in all my friends to get their opinions on it. The word wasn’t English; neither was it German nor French. Then somebody had a brilliant idea and suggested holding it up to a mirror and the mystery was solved. The words means ‘Lenore,’ reversed.”

George Cochrane Hazelton was a lawyer, actor, author, and playwright, which suggests that this account is the early-20th-century version of a viral marketing campaign for The Raven: The Love Story of Edgar Allan Poe, Hazelton’s novel, published by Appleton in 1909. His play, The Raven, was published in 1893, and in 1915 it was made into a silent film. See more here about the film.  Nothing like a spooky backstory to create interest in a novel about Poe. And Hazelton is a convincing ranconteur who “does not believe in spiritual manifestations or ghost stories” and is mum about the identity of his principal witness.

Poe was originally buried in a corner of Westminster Hall and Burying Ground in Baltimore, without a headstone, but as his literary star rose, his body was exhumed and reburied in a more prominent position in 1875, with an impressive new monument and orations from local notables. What happened to the rest of the old coffin? And any ideas about the identity of the “very dear friend,” the wife of the editor of the Baltimore newspaper, who took home the coffin wood?  A horrid thing to do, if it really happened,  but certainly not unprecedented (see a previous post on secular relics.) A nice touch, that, the lady fearing that the wood might be changed unless she watched the whole operation.

Send suggestions in mirror writing to Chriswoodyard8 AT gmail.com