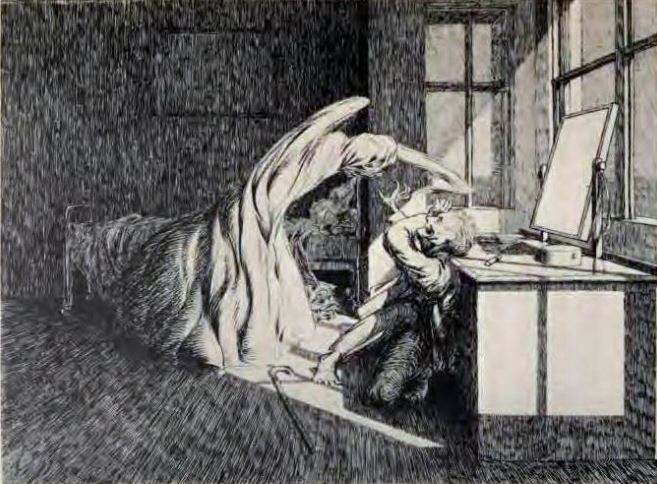 Rocky Mountain Cry – A Colorado Banshee Illustration of the ghost with a face like crumpled linen from “O, Whistle, and I’ll Come to You, My Lad” by M.R. James

Today’s story of a strange, wailing apparition seen on a remote Colorado peak comes second-hand through an Irishwoman who heard it from the (possibly American) witness. It has features of a banshee tale, but something seems to have been lost in translation.

The other afternoon, a dear old lady called Mrs. Camperfield, who lives at the further end of the village, came to take shelter at our house from a shower of rain; and she told us no less than three ghost stories “straight off the reel,” as she sat on the drawing-room sofa facing us all, and twisting a shabby pair of grey cotton gloves round and round in her hands, her bright old eyes peeping merrily, first at one young face, then at another among her audience, from beneath the shelter of her wide black coal scuttle bonnet.

“My first ghost story,” she announced mysteriously in her husky quavering old voice, “is an American one. It was told me by my young friend, Daisy Heseltine, who some years ago was staying with relations near Colorado Springs (a well-known health-resort) and while there received an invitation from a girl she had lately met—Adela Morrison, to come and spend the week-end at Adela’s parents’ ranche, situated in a wild and distant part of the country, forty miles or more from any neighbouring homestead, and close underneath a gigantic ‘spur’ of the famous Rocky Mountains.

“Adela’s people, as it happened, were away from home at the time; her mother having gone to nurse some sick relation at a township two days’ journey, at least, away by rail—her father and brothers on a hunting expedition; so the two girls were left to manage the ranche by themselves, with only the hired labourers and other stock-hands to help them.. Not that they minded, being used to a free life—and old Joe, the head stockman, was the most trustworthy of creatures!

“Sunday morning dawned bright and clear—a most gorgeous day; and Adela suggested to Daisy they should go for a picnic, and incidentally, explore a certain deep ‘canyon’ or creek of the great mountain which they had never been up before; so the two girls saddled their horses, put some lunch into their pockets and set off.

“About a quarter of the way along the canyon (the furthest point to which Adela herself had ever dared penetrate though she had lived so long in the neighbourhood) stood a miner’s deserted hut—just as its owner left it, containing a few broken chairs and a table—a mere shell of a place, the sport of wind and weather: and beyond it one saw nothing but the roughest of mountain pathways, with thick pine-forest upon the right hand, and a mass of low scrub and. brushwood leading away to the distant prairie on the left; while high over all towered a gigantic mountain-peak clothed to its very summit with dense virgin forest, save just where the snow-capped glittering crest showed clear against the brilliant autumn sky.

“I do want to get to the very end of that canyon,’ exclaimed Adela; and she and Daisy hurried their surefooted ponies forward, though every moment the path seemed to grow yet more narrow and steep, the brushwood higher and more dense, till when they had covered a considerable distance, Adela held up one finger and cried, ‘Hush! Listen! What can that strange sound mean?’

“Both drew rein sharply and again there fell on their astonished ears a curious low moaning, like the voice of some creature in pain, coming from the masses of dense dark undergrowth on the left-hand side of the path.

“‘It is some wretched wood-cutter or trapper, I expect,’ declared Adela, ‘who has caught his foot in a hidden hole or tree-root and fallen, breaking his leg. There he may lie for days in hopeless agony, and perhaps die of hunger and thirst, as no one is likely to be passing this way or hear his cries for help. Come, we must go to him!’

“So saying, she promptly turned her pony’s head away from the narrow pathway and plunged deep into the brushwood; Daisy following her rather more doubtfully, though Adela assured her there was nothing to fear. “’There are no bears or Indians in these parts, and I’ve got a revolver, you know.’

“Further and further they pushed on into the lonely trackless scrub; where bushes and trees grew so closely together one could scarcely see an inch before one’s face. And always, just ahead of them, came that curious mournful wailing—now nearer, now far off (it was not at all easy to calculate distances in that wild echo-breeding region), and for some time at any rate, after they first heard it there was no doubt at all in the youthful listener’s minds but that the tones proceeded from a genuine human voice; each moment they expected to burst through the thicket upon its owner.

“At length they reached a part which was so overgrown it was impossible to press through on horseback: so the girls dismounted and tied their ponies to a tree, deciding to push forward on foot—they could still always hear ahead of them that weird pitiful sound, now to the right, now to the left, yet never, strange to say, could they manage to catch up with it.

“They tramped on for a few more moments in dead silence, then suddenly each turned and faced the other; there came flashing across the mind of them both that something was not quite ‘canny’ about that singular wailing. They turned and fled backwards, fast as their feet could carry them to the open glade where they had left their horses, leapt to the saddle, and were on the point of galloping full-tilt home to the ranche, when Daisy, happening to turn her head and glance upwards, exclaimed:—“‘Look, Adela, look!—right up there on the side of the mountain!—what can that most extraordinary creature be?’—and Adela, following her companion’s outstretched finger, gazed equally dumbfounded! For there—high up on the very crest of the huge peak, where no foot save that of the Red Indian or grizzly bear had ever trod, was an enormously tall figure, robed from head to foot in purest white (its garments reminding the two girls of grave-clothes!)—though whether it were ghost or bird or gigantic human being was impossible to tell at that far- distance—waving two great white arms (or were they wings?) and flitting disconsolately to and fro upon the mountain-side; though how it had got up there or what it was doing no human tongue could tell.

“‘’Do you think the moaning came from that? ’ murmured Daisy, her eyes wide with terror; but Adela made no reply. Both set spurs to their horses and never drew rein till they had reached the welcome shelter of Adela’s homestead.

“And though many a time afterwards, when they had more or less recovered from the first effects of their fright, they rode once more all the way up the canyon, past the ruined hut, and on into the very recesses of the mountain, never again did their ears catch a sound of that wild mysterious wailing, nor their eyes a glimpse of the curious white-clad figure, ‘moping and mowing,’ in solitude and silence, between the forest and the sky!

The Irish narrator almost certainly meant for the creature of the peak to be understood as a banshee. I realize that, while they are more often heard than seen, banshees come in different varieties: red-haired, grey-haired, bloody-handed, white-clad, black-clad, grey-clad…  But this giant wailing creature, flitting atop an inaccessible mountain peak evokes something more monumental, or perhaps elemental. It also, rather ludicrously, suggests the sheet-ghost seen by the boy to “wive at me out of the winder” in “O, Whistle, and I’ll Come To You, My Lad” by M.R. James. The young ladies seem to have been a little slow getting to their silent-on-a-peak-in-Colorado-Springs realization that the thing was “uncanny.” And if it was a banshee, where is the death it foretold? Most unsatisfactory, the whole thing….

To be Relentlessly Informative, “moping and mowing” comes from King Lear, Act IV, Scene 1, where it is actually “mopping and mowing,” referring to facial grimaces. Edgar uses it in describing “five fiends” that have possessed “poor Tom.”

Any suggestions about what it might have been? An albino condor? Cloud formations? An archangel? chriswoodyard8 AT gmail.com

Mary gives some plausible natural explanations: the “thing” could have been some kind of swirling cloud mass or snow eddy on the mountain.

An anonymous reader writes: Have you considered that the creature might have been a a SASQUATCH?  Do SASQUATCH have seasonal color changes?

[I have heard of sightings of white sasquatch-like creatures and reports of moaning/shrieking associated with them. But I don’t think they look like they are robed or have arms like wings.]