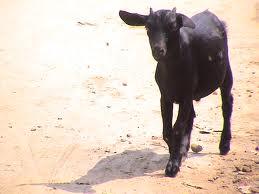 Despite their association with ritual magic and the Devil, ghostly goats rarely figure in paranormal literature. When they do, they often have a whiff of the elemental about them, as in this tale published in 1921.

There was a large boarding school for boys on the Continent, in which the dormitories were divided up into “partitions”—every bed being separated from the next and from the passage in front, by curtains running on long rods. Every body on going to rest could thus shut himself up in a sort of tiny room. Dim lights burned in the dormitories all night.

One of the boys, of active brain no doubt, could never succeed in falling asleep, as boys generally contrive to do the moment they get into bed; he nearly always lay awake for an hour or more ere “an exposition of sleep fell upon him.”

On nights when he remained awake longer than usual, he used to notice a strange thing. Out of the deep stillness that surrounded him, he would hear a small faint sound, arising far off in the long corridors outside the dormitory, and gradually approaching the door (which remained open all night) till he could distinguish a tripping, tapping step, like that of some small-hoofed animal. The step would enter the dormitory, come towards him along the passage between the rows of partitions, stop just short of his own, and enter the next one. In a short time he would hear the strange visitant leave the other partition and go down the passage again; the sound at length dying away in the corridors outside.

The listener, who seems to have been a silent and self-contained boy, said nothing to any of his companions of the mysterious sound. But it greatly excited his curiosity, and one night he determined to try and see the strange visitant of the dormitory.

Waiting therefore till the steps were receding down the passage and had got some distance away, the boy threw back the bedclothes, got to the foot of his bed, and as noiselessly and possible drew back the curtain a little way and peeped out. As before observed, there was a faint light burning, and the boy was able to see what the visitant was.

It was a small black goat.

In the morning the boy, with some justification, “reported sick,” and was sent to the infirmary. In the course of the day he told the authorities the cause of the nervous shock from which he was suffering. The matter was kept from the knowledge of the other boys, and that night, when the partitions were closed, a master very unostentatiously entered the sick boy’s partition and got into bed.

The master kept watch till he heard the tapping step come along the corridor, draw near, and enter the next partition. He waited a moment or two, and then slightly pushed aside the curtain at the head of the bed.

The boy in the next partition was lying on his back in bed. A black goat was standing on the bed, its forefeet on the boy’s throat, and it was looking into his face with red, fiery eyes.

The master let the curtain fall again. Soon he heard the being in the next partition get down from the bed, and walk away down the dormitory, till the faint sound of its steps was lost in the night.

Next morning the boy in the other partition failed to get up with the rest. When they came to call him, they found him lying on his back, dead, with black marks, as of small hoofs, on his throat.

This story was related to me many years ago, as a fact, by a person who had means of judging as to the truth of it. Beyond this I am unable to go; though the very bizarre quality of the story speaks in its favour.

Certainly an intriguing tale. If true, it is difficult to believe that the watching master did nothing when seeing the goat, but this passivity is found in many other accounts of the paranormal:  An apparition appears, the witness is frightened, and then he rolls over and falls asleep. The same situation has been reported in stories of alien abduction and mysterious bedroom intrusions.

It is an interesting question whether the strangeness of a story makes it more plausible. I’ve been looking at patterns in ghost stories for many years. Do the same tired stories of footsteps on the stairs, lights flashing on and off, and death-bed apparitions constitute some kind of proof merely by their very quantity and consistency?

My inner ghost-o-meter began flashing infrared lights whenever a witness told me a story that was well out of the ordinary. Some were obviously attention-getting devices: A 7-foot Bigfoot with horns, for example. Others started with standard phenomena: polts or ghosts. Then, as they saw that I was listening, the persons would begin to add that they had experienced other types of paranormal incidents: UFOs, aliens, abductions, monsters, the Devil, Satanic rituals—the whole ball of ectoplasm.  Eventually the plausibility of the teller crumbled under the sheer weight of the alleged phenomena.  Perhaps I was wrong to dismiss their stories—it has been said that “experiencers” do have multiple types of encounters.  It may be that in collecting anomalous reports we should look for something that doesn’t follow a predictable paranormal pattern because, as M.R. James once said, we do not know the rules.