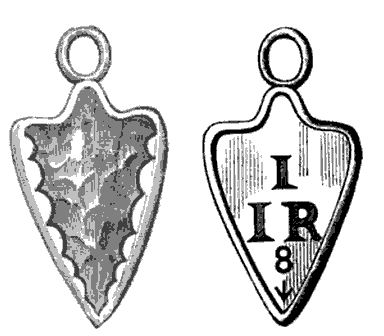 The Elf-Shot Spaniels Elf shot mounted as a charm to keep away the elfin darts.

Tomorrow is, I am given to understand, Fairy Day. I hope you all have your fairy cakes and toast with sprinkles and a glass of pale elderberry wine with which to celebrate the day. This piece, from Ireland, gives us what we might call “Fairy Realism.” Instead of modern, pastel-clad guardians of the forest, we find grotesque and malevolent creatures who respond to an innocent dog’s incursion with elf shot that drives him mad.

An aunt of mine once had a dog that was said to be elf shot by fairies. It was a water spaniel, a sturdy-looking brown-and-white dog with big brown eyes, all agog with fun and excitement, at least, until the incident I am about to mention took place. My aunt lived near a moor, on which was a black, deep and sullen-looking pool, that was reputed to be haunted both by ghosts and fairies. One evening my aunt and one of her old servants, Molly Broderick, happened to be returning home from the fair in Limerick. The weather had been very sultry all day, and despite the fact that the sun had long since sunk to rest, it was still unbearably hot. On arriving opposite the pool, Grit, the spaniel, ran up to the edge, and was about to plunge in, as was his wont, when he suddenly started back, and, lying at full length on the ground, began to whine piteously.

“Gracious me, Molly,’’ my aunt exclaimed, “what is the matter with the dog?”

“Och musha, I dunna,” Molly replied, crossing herself vigorously, “unless it’s the fairies he sees.” Then with a loud cry of “Awirch, awirch, look, look,” she pointed in a great state of agitation to the centre of the pool, where my aunt saw, floating on the surface of the black water, a number of what looked like phosphorescent rings. She had not time to examine them very closely, however, for Molly, clutching hold of her by the arm, dragged her forcibly from the spot, exclaiming as she did so, “They are the fairy lights, mum. They always come before the fairies themselves appear. Come, come quickly, for if the fairies catch sight of us they’ll shoot their arrows at us, and we shall have no more peace for the rest of our lives.”

My aunt, who did not believe in fairies or anything of the sort, laughed and tried to persuade Molly to stay, but it was of no use, and, seeing that she was really afraid, my aunt hurried home with her. In their haste neither of them apparently thought of Grit, and it was not until they were turning in at the gate, that they discovered he was not with them. My aunt wanted to go back to the spot to look for him, but Molly implored her not to, and for the second time that night she gave in. Grit stayed out all night, and, on his return in the morning, a strange change was observed in him. Gone was all his friskiness and friendliness; he was sullen and dejected, and remained so all day. On the approach of evening, however, he seemed to recover his exuberance of spirits, and when the sun began to set and the shadows to come out, he raced off in the direction of the moor, not returning home again till the following morning, when his behaviour, as before, was quite abnormal. Now as Grit behaved like this day after day, Molly declaring it was all due to the fairies of the pool, who had shot him with their arrows, my aunt resolved to follow him, when he raced off in the evening, and to find out if she could where he went and what he did.

She carried out her plan, as soon as possible, and following Grit found him at the pool, but, instead of plunging in, he lay on the bank and whined, till a number of tiny forms suddenly rose out of the water, and, gliding to the shore, danced round and round him. My aunt described these forms as being about a foot and a half in height, and clad all in green, with very grotesque faces. She said they made no noise, but performed all their revolutions in absolute silence. While she was looking at them, she was suddenly seized with an irritation in her throat and coughed, whereupon the fairies vanished, and Grit growled so savagely at her that she became alarmed and ran. Fortunately she happened to meet a horse and trap with people in it whom she knew, and they, seeing my aunt running with Grit snarling at her heels, pulled up and drove him off with a whip. But for this my aunt was quite sure Grit would have bitten her. What became of him afterwards was a mystery. He never returned to my aunt’s house, and as far as she could gather no one in the village ever saw him again.

A sad end for a frolicsome spaniel! The Gentry were intensely territorial and did not forgive trespassers human or canine—innocent or not.  It’s possible the dog had distemper or rabies—a genuine horror for our ancestors—although we would think that the aunt would have heard something about a mad dog being on the loose or shot, if that was the case.

Cows, sheep, and other farm animals were the more usual targets for elf-shot; a dog in this context is a rarity.  Humans, too, were not immune from the dread darts and there were special fairy doctors (naturally from Elf and Safety) who knew what charms to use to heal elfin wounds.

It is said that the notion of elf-shot arose from artifacts: tiny flint arrow-heads (or, in some cases, sickle flints) plowed up in fields.

Sir John Evans gives us some folklore about elf-darts.

Mention has already been made of the superstition attaching to flint arrow-heads in Scotland, where they were popularly regarded as the missiles of Elves. In speaking of them Dr. Stuart quotes Robert Gordon of Straloch, the well-known Scottish geographer, who wrote about 1661. After giving some details concerning elf-darts, this writer says that these wonderful stones are sometimes found in the fields and in public and beaten roads, but never by searching for them; to-day, perhaps one will be found where yesterday nothing could be seen, and in the afternoon in places where before noon there was none, and this most frequently under clear skies and on summer days. He then gives instances related to him by a man and a woman of credit, each of whom while riding found an arrow-head in their clothes in this unexpected way. Mr. F. C. Lukis, F.S.A., draws a distinction between the elf-shot or elf-arrow and the elf-dart, the latter being of larger dimensions and leaf-shaped. He gives an engraving of one which has been mounted in a silver frame and worn as a charm. [See the illustration at the head of the post.]…The initials at the back are probably those of the owner, who mounted the amulet in silver, and of his wife. It was worn by an old Scottish lady for half a century. Others thus mounted were exhibited in the Museum of the Archaeological Institute at Edinburgh in 1856.

Another arrow-head, also thus mounted, is engraved by Douglas, but in this instance it was found in Ireland, where “the peasants call them elf-arrows, and frequently set them in silver, and wear them on their necks as amulets against the Aithadh or elf-shot. Others are engraved in the Philosophical Transactions and in Gough’s “Camden’s Britannia.”Sir W. Wilde informs us that in the North of Ireland, when cattle are sick and the cattle doctor or fairy doctor is sent for, he often says that the beast has been elf-shot, or stricken by fairy or elfin darts, and by some legerdemain contrives to find in its skin one or more poisoned weapons, which, with some coins, are then placed in the water which is given the animal to drink, and a cure is said to be effected. The Rev. Dr. Buick, in an article on Irish flint arrow-heads, has given some particulars as to their use in curing cattle that are bewitched, and the Folklore Society has published some details as to the beliefs still existing with regard to fairy darts. The same view of disease being caused by weapons shot by fairies at cattle, and much the same method of cure, prevailed, and indeed in places even now prevails, in Scotland.

The late Dr. J. Hill Burton informed me that it is still an article of faith that elf-bolts after finding should not be exposed to the sun, or they are liable to be recovered by the fairies, who then work mischief with them.

Mr. Llewellynn Jewitt has recorded a similar elf-arrow superstition as obtaining in Derbyshire, where flint arrow and spear heads are by some regarded as fairy darts, and supposed to have been used by the fairies in injuring and wounding cattle. It was with reference to discoveries near Buxton, in that county, that Stukeley wrote—” Little flint arrow-heads of the ancient Britons, called elfs’-arrows, are frequently ploughed up here.”

The late Sir Daniel Wilson gives many interesting particulars regarding the elf-bolt, elf-shot, or elfin-arrow, which bears the synonymous Gaelic name of Sciat-hee, and cites from Pitcairn’s “Criminal Trials,” the description of a cavern where the archfiend carries on the manufacture of elf-arrows with the help of bis attendant imps, who rough-hewed them for him to finish. He also mentions the passage in a letter from Dr. Hickes to Pepys, recording that my Lord Tarbut, or some other lord, did produce one of those elf-arrows which one of his tenants or neighbours took out of the heart of one of his cattle that died of an usual death (sic). Dr. Hickes had another strange story, but very well attested, of an elf-arrow that was shot at a venerable Irish bishop by an evil spirit, in a terrible noise louder than thunder, which shaked the house where the bishop was…

I like the image of people shaking elf-shot out of their clothes after a ride. I can’t seem to locate the original of that particular story–can anyone help?

It is said that if you find one of the tiny flints, it will keep you from being pixie-punctured. But you must be careful to always keep it by you and never give it away. If you do, you might as well walk right up to the nearest rath and give yourself up; they’ll be coming for you soon.

Other unusual examples of elf-shot creatures? I can’t imagine a cat ever being hit. chriswoodyard8 AT gmail.com