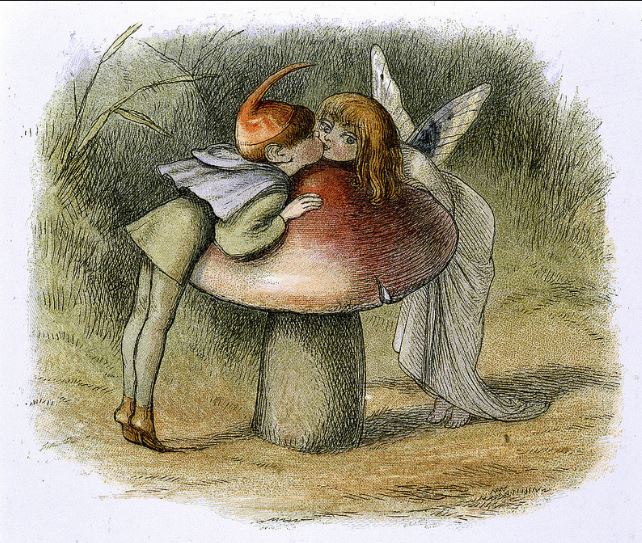 The Fairy Kiss Fairies kissing over a toadstool, Richard Doyle, 1870

Are the Fae friend or foe? Well, that depends, as we see from this story from an Irish country house, of a visit from the Gentry to a grieving woman.

Here follows what some may scoff at as much as they please ; and most folk are easily pleased at their own imagined superiority. But it is true, for all that. Indeed, of the various tales recorded here, this fairy tale is the most genuine to my mind —because of my trust in her who told it me. Of all my acquaintances and friends, she who is a near and dear relation, is the most free from all least exaggeration; is careful as Boswell himself only to set down that which was said, heard or seen, to the minutest trifle. Doctor Johnson would truly have approved of her, as contrasted with the flights of fancy of Mrs. Thrale, whom he so often reproved, because

Inaccuracy is worse than fibs.

This story was told me immediately after the episode happened some few years ago in Ireland. Eileen, as we may call her, had been giving me the sad details of a death in which we were both concerned. She went on to tell how, leaving the house of mourning, she went a short journey to stay with some friends who wished to give her a much needed rest and change of air.

Arriving on a June night, she found a warm welcome coupled with understanding sympathy. The room to which her hostess led her was so spacious and evidently new in its furnishings that Eileen remarked how large and pleasant it was.

“Yes. This is our best bedroom,” answered the hostess. “It was built over the new sitting-room below, by my father-in-law, as the house needed enlarging. Unfortunately this new wing has encroached on the lawn of which the family have always been proud. It is a really virgin piece of old turf.”

Then hospitably urging her guest to take a good long rest, and not come down until after breakfast next morning, the hostess bade good-night. Through the open window stole the sweet warm air of a June night, and as the tired traveller looked out moonlight silvered the greensward below into a court of sylvan fairy beauty, guarded as it were by some gnarled ancient May trees, to which still clung snowy patches of belated fragrant blossom.

Wearied by recent sorrow, Eileen soon slept and that soundly. It was past daybreak when she awoke with a start. Curious! The bedclothes had slipped off her, and were almost on the floor. Just as she drowsily grasped at them, a decided twitch pulled them out of her fingers; and they went down in a heap on the floor.

“Why! What on earth?” wondered the late sleeper, whose wits were hardly fully roused. It was as if a puppy or a kitten were playing a little game ; so she looked over the edge of the bed to see. But no four-footed playmate was visible. So, yawning, she retrieved her blankets and sheets ; and sleepily supposing she had herself been restless, lay down again.

Five minutes passed, and sleep had not yet returned, when —Twitch! All the bedclothes were sharply pulled off again.

This was really annoying; startling. Fully persuaded there was certainly some playful puppy under the bed, Eileen started up and looked, prepared to be indulgent; for she loved animals; still, this one must be put in the passage.

Nothing there. But now, really awake, she searched round the room, that was quite bright as the early sun filtered through the blinds. She drew them up to look out at the morning freshness of delicious June. Then soothed by the sight of a dew-washed world, cleansed and sweet, awaiting the working day, she once more rearranged her bed, and lay down. The birds had hardly yet begun their morning songs. Only a few stray chirps and twitters came from here or there. . . .

But though Eileen closed her eyes, she could not sleep. It was in her mind that, as certainly she had been roused, her nerves must be out of order. Could the late sorrow have affected them so greatly, that self-control | deserted her in spite of reason ? That vexed her. Next, naturally, thought turned to the cause of her sadness. No time like the early awakening for the heart’s pain to wake and cry . . . scenes, words come back, sharp, clear, as if just heard and lived through . . . and so (she told me) some few tears slowly “might have slipped” through closed eyelids.

There came a kiss on her cheek!

At that Eileen lay quite still; awed but ineffably comforted. Whether the unseen presence was the spirit of one recently mourned, or some other loved one passed over, she did not seem to inquire. Enough that some sympathy understood, sought to console her. And so she went to sleep.

When full morning shone, the hostess came, rejoiced to find her guest refreshed. “You must have slept well . . . What! the bedclothes kept sliding off? Ah!. . . Twice, you say? And did nothing else happen ?”

The tone of the question was peculiar; not grave, rather made with a light significance, but expecting more to follow.

Surprised, Eileen told of the kiss, falteringly; her friend would— ? She did understand.

The two incidents went together, the latter explained; or so she believed. “Perhaps I ought not to have put you in this room ; but there really was no other to spare. I may tell you that you are lucky. Some persons have been pinched. To be kissed—that is an honour!”

Then in answer to astonished questioning—and no wonder— the lady of the house that, though not haunted, yet had its oddities, gave the only reason, however unreasonable sounding, that was current among the inmates and surrounding peasantry.

All the countryfolk believed from time immemorial that the lawn at this house was old fairy ground. May trees, especially old ones, are sacred to the little green people. So when the new wing was built over what was supposed to be a fairy palace there was quite a deal of talk and ill-feeling through the countryside. The people declared that ill luck would come of it. Therefore twitchings and pinchings of the guests in the room overhead surprised none of those who knew what to expect and what was due to the “good” gentry who are not to be spoken of lightly.

Other instances of the living belief in fairy existence in Ireland have been told me ; but this is the only one come firsthand. Many persons will scoff at the supposed revival of so antiquated a belief as that in spirits of trees, fire, earth and water, in fact, what were called dryads, naiads, and so forth, in classic lands, and gnomes, trolls, and fairies in the North. Yet the “winged ones” understand and know.

A sweet if atypical story of the sympathy of the Good People to human suffering. Or perhaps it was the Gentry twitching the blankets and the spirit of the late loved one who gave the kiss. Having the covers pulled off the bed is also a fairly standard ghost trick. You clutch and clutch, but eventually the spectral hands win.

To suggest a far grimmer possibility, fairy kisses are also delivered by the Lanahan-sidhe, or fairy mistress. She visits young men in the form of a beautiful, if malignant woman and her kiss seals the man’s doom forever: he will waste away and die. Might the Lanahan-sidhe also prey on women?

Pinches and twitched bedclothes were as nothing to the more usual scenario where an unwitting human builds on a fairy dwelling or path, and finds himself cursed with terrible luck. The People of Peace are jealous of their properties (one might call this “Gentrification.”) and the mortal who defied them was normally visited with poverty, illness, and death.  And woe to any who cut down a May tree—the hawthorn.  Sometimes the fairy tenant would approach the builder and try to reason with him to either move the site of the building, or stop pouring dirty household water on the tenant’s property. There is a famous farmhouse with one sharply clipped corner: it was blocking a fairy path and once the corner was knocked off, luck returned to the house.

The owner of the house who built on that “virgin piece of old turf” must have had to import workmen to do the job; locals would have shied away from such trespass.  They were fortunate that the wing did not collapse. All told, the house and the family seems to have got off lightly, except of course, that the hostess’s father-in-law died sometime after building the wing. Coincidence? The locals would say not….

Other examples of fairy kisses? Wake me up first, please. chriswoodyard8 AT gmail.com