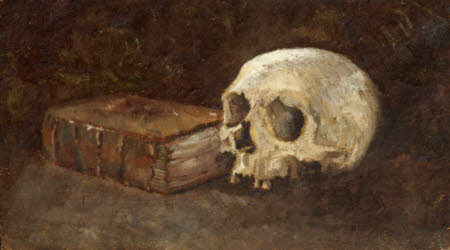 Today is World Book Day. I’ve already posted on  “The Black Book of Wizard Zittle,” various ghost writers here, and here, and “The Case of the Levitating Law Books,” so in celebration, I tender for your enjoyment a slight tale involving a Bishop, a ghost, and a book.

The following remarkable incident in the life of the late Samuel Wilberforce, Bishop of Oxford and afterward of Winchester, is related as absolutely authentic, and the good Bishop himself is said to have many times rehearsed the story to his friends. Bishop Wilberforce was most prominent among his contemporaries of the English clergy, and was once a leader of the High Church Party. He, however, frequently found time to devote to the social side of life, and was sometimes styled the “Bishop of society ” by those who knew him. On a certain occasion the worthy Bishop had accepted an invitation to stay at a country-house not far from London. Entering the drawing~room previous to dinner, on the evening of his arrival, he noticed a priest— evidently of the Roman communion—sitting by the open fire and taking no part in the general conversation. The Bishop was somewhat surprised at not being presented to the priest, and his astonishment was great when, a few moments later, dinner being announced, the guests retired, leaving the priest at his place by the fire. The hostess having assigned Bishop Wilberforce the seat of honor at her right hand, as soon as an opportunity of referring to the subject offered he remarked:

“I beg your pardon, Madame, but may I inquire who was the priest we left sitting apart in the drawingroom?”

“Ah, you have seen him, then,” replied the lady. “It is not every one who has that privilege. I cannot tell you who he is or from whence he comes. For many years this spectre has haunted the house and grounds—it has, in fact, been a tradition in the family. He seems to do no harm, and although he appears only occasionally, we have become accustomed to our friendly ghost.”

“How singular,” remarked his Lordship. “But have you never addressed your ‘ priestly spectre?”

“Indeed, I have had no opportunity, nor the desire, for that matter,” responded the hostess, growing pale.

“May I take the liberty now?” inquired the dignitary.

“With all my heart, your Lordship,” replied the lady.

The Bishop arose and, returning to the drawing-room, found the priest where he had left him a few minutes before.

Having no fear, the Bishop said kindly: “Who are you, my friend, and why are you here?”

The spectre seemed to sigh deeply and say, as though to itself, “At last! ” Then, in a hollow voice, addressing the Bishop, it continued: “I am the spirit of a priest who left this world some eighty years ago, and I am here to impart to any one who will receive it a secret which died with me. I could not rest in my grave while a great wrong was being done which it was in my power to right. I have been returning all these years in the hope some one would address me, for it was not given to me to be the first to speak. All men have shunned me until now, and it is your mission to do my bidding. I was a priest of the Church of Rome, and was called to this house eighty years ago to receive the confession of a dying man. He was the sole possessor of a secret, the knowledge of which would alter materially the entail of this vast estate, and in his death the man wished to repair the terrible wrong he had brought upon his kin. At his request I wrote down the confession, word for word, and when he finished, had barely time to administer the final sacrament of the Church, before he expired in my arms. It was very important that I should return to London that night, and in passing through the library to leave the house I concluded it would be safer not to carry the paper on which was written the confession away with me, but to place it in some secure, unseen spot, where I could obtain it the following day and deliver the document to the person for whom it was intended. Mounting the steps to the book-shelves, I took out a copy of Young’s ‘Night Thoughts,’ which was the first book upon the uppermost shelf nearest the last window, and inserting the paper carefully between its leaves, I replaced the book and departed. A horse was awaiting me at the door, but ere we reached the entrance of the grounds he took fright; I was thrown and instantly killed. Thus died the secret of my confessor with me. No one has disturbed that book in all these years and no one has had the courage to address this messenger from the unknown. The paper will be found as I have stated, and now remains for you to correct the injustice which has so long been upon this noble family. My mission is over and I can rest in peace.”

At the close of this speech the spectre faded gradually, and the Bishop was left gazing into space. Recovering from his astonishment, Bishop Wilberforce went at once to the library and found the book exactly as indicated by the spectre. In its secluded corner, upon the top shelf, thick with the dust of ages, evidently the book had remained unmolested many years. There was the document just as described, but now faded and yellow. The secret of the confession never became known to the world. The good Bishop regarded it as a confidence from the spiritual world, and always ended the story with the assurance that the priestly spectre was never again seen. It is a fact, however, that about the time of this extraordinary occurrence the magnificent estate passed into possession of a remote member of the family, who, until then, had lived in obscurity.

Bishop Samuel Wilberforce was also known as “Soapy Sam,” either for his habitual hand-washing gesture or from a remark by Disraeli that his manner was “unctuous, oleaginous, saponaceous”.  He was one of the most powerful public speakers of his day and is perhaps best remembered for his debate over evolution with Thomas Henry Huxley in 1860 at the Oxford University Museum.

The Bishop himself figures in a story in Lord Halifax’s classic collection:

The Ghost of Bishop Wilberforce

This story seems to have been collected on the same occasion as the two preceding ones, and the narrator was probably Bishop [George Forrest] Browne, Bishop of Bristol.

The late Bishop of Winchester (Dr. Wilberforce) had often expressed a wish to see Wooton, Mr. Evelyn’s place, not far from Guildford. He was particularly interested in a portrait there of Mrs. Godolphin, whose life he had written in his early days. Somehow he had never been able to pay the visit, but on the occasion of his death he was riding with Lord Granville about two miles from Wooten. Mr. Evelyn, the doctor, a Mr. Harvey, and a brother of Mr. Evelyn’s were sitting in the dining-room at Wooten when one of the party exclaimed, “Why, there is the Bishop of Winchester looking in at the window!” they all looked and saw a figure, which disappeared. They went out to see if the Bishop was there, but there was nobody. Half an hour later a servant came in with the news of the Bishop’s death. He had been killed by a fall from his horse on his way to Holmbury, where Lord Granville was living.

Wilberforce died in 1873, like the priest in his story, killed in a fall from his horse. Given that little coincidence I thought perhaps (and this is reaching and probably over-thinking) the ghost story was meant to be a commentary on the Tractarian controversy. While the Bishop was a High-Churchman, he was not in sympathy with the Oxford Movement.

Ghosts with a mission seem to fill the annals of psychic research. I’m not sure why a priest would have chosen “Night Thoughts” by Protestant clergyman Edward Young or why such a volume would be on the shelves of an orthodox Catholic family (if we can assume that the dying man was a member of the family), but never mind… The fact that the volume was still in the same place eighty years later perhaps does not speak well for the fascination of that lugubrious work or the quality of the household’s dusting.