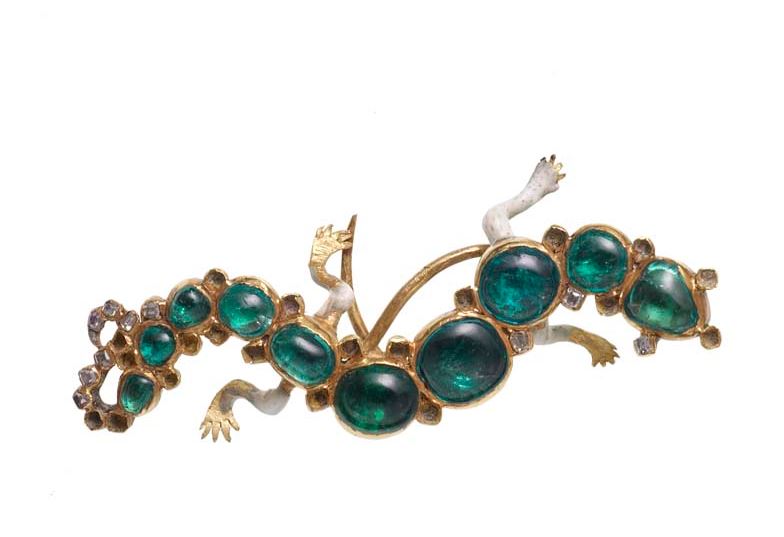 The Glitter and the Ghoul A glittering emerald salamander from the Cheapside Hoard, late 16th-early 17th century. https://collections.museumoflondon.org.uk/online/object/126062.html

In this, the last of our series on Objects of the Damned, we turn to the glittering world of haunted gems.

During the summer of 1912, several buildings in Cheapside, owned by the Worshipful Company of Goldsmiths were being torn down by laborers working with picks and shovels. Deep in a cellar these workmen literally struck gold—and they knew just what to do with it.

Although the law of treasure trove said that the finds should be reported to the local Coroner and were rightfully the property of the Worshipful Company of Goldsmiths, the navvies took their dirt-caked finds to a man they trusted: George Fabian Lawrence, known as Stony Jack, a pawnbroker and antiquities dealer and collector. Lawrence, distressed at the loss of historic artifacts as London modernized, had befriended crews of workmen and taught them what to look for. He paid them fairly and boasted that he had saved thousands of historical artifacts for the museums. [For more on Stony Jack and the Hoard see this terrific post by the inimitable Mike Dash.]

Lawrence knew instantly that the jewels coming into his hands were something special, so rather than selling the objects privately, he called in the London Museum. Which is where the story below begins.

Remarkable statements concerning a fine collection of Elizabethan jewels in the Gold Room of the London Museum, Lancaster House, St. James, S.W., were made to a representative of the ‘Daily Mail’ by an authority in full possession of the facts, who desires to remain anonymous at present.

The jewels were found by workmen in the city, near St. Paul’s Cathedral, about eight years ago, during’ excavations for the building of a warehouse. They were in a decayed wooden box and consisted of about 150 gold and enamelled articles, including neck chains, pendants, rings, unset stones, and various ornaments.

”’They were taken by the workmen to the house of an official of the London Museum, who kept them in his study for a fortnight, in the meantime informing the Treasury of the discovery,’ states the authority. ‘The jewels arrived about six o’clock one evening. About ten o’clock, although it was a warm June night, the official and his wife and daughter experienced a sensation of cold and shivering in the room where the jewels had been placed.

‘Later an art student friend, who claims to possess occult powers, called at the house and was shown into the study, where the official and his wife and daughter were.

‘The student presently startled the family group by observing that he could see, standing by the jewels, a person whom he described as a tall, thin man in Elizabethan costume, who looked very angry. He further declared that he heard, or ‘sensed’ the apparition say, ‘These are my jewels; what right have you to them?’

‘Two or three years later, long after the jewels had been placed in the London Museum, there was a curious sequel. A professional medium, who knew nothing of what had happened, while visiting the official at his house, declared that he saw a man standing by the side of his daughter, who, he said, does not like you (the girl), and might do you an injury. His description of the man tallied exactly with that seen by the art student. The daughter, it should be said, used to clean the jewellery when it was in the house.

”Another curious incident occurred just before the war. A woman spiritualist, when shown the jewels at the London Museum, fainted. On recovering, she accounted for her illness by explaining that she had seen blood on a gold neck chain amongst the jewels, and that she had ‘sensed’ that the woman who originally wore it had been murdered by somebody who wished to obtain possession of it.

‘Since then there have been no further strange manifestations. From a psychical point of view, it is considered that the original owner of the jewels does not object to them remaining where they are, as they are national property, and not in the possession of any private individual.

The same is held to be true of images of Buddha taken from Eastern temples and placed in the Indian section of the Victoria and Albert Museum.’

When word got out about the jewels, there was quite a bit of  legal wrangling over whether the Hoard was treasure trove or if an inquest should be held, but eventually most of the jewels ended up in what is now the Museum of London.

Mike Dash mentions Kris Lane’s book, The Color of Paradise, which tries to solve the question of who owned the Hoard before it was buried. Lane suggests that the original owner was a Dutch gem merchant, Gerard Polman/Gerrard Pulman, who died on board an East India Company ship on a voyage back from Persia. He was not a well man, but it was rumored that he had been poisoned by the ship’s surgeon. The crew was all too aware that the merchant was carrying a fantastic wealth of jewels and on his death some of the ship’s company broke into Polman’s boxes and helped themselves. Shipwright Christopher Addams was one of the ringleaders.  I’m not sure how he managed to not be murdered by the rest of the crew for his share, but he jumped ship and started selling the jewels in London. He was arrested, and, in his court testimony, described a particularly large emerald that seems to match a unique piece from the Hoard. It is a fascinating and plausible tale, although we probably will never know the truth. 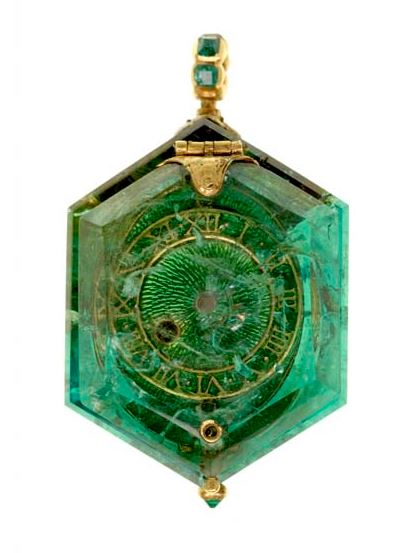 The Glitter and the Ghoul A watch set in a case carved from an emerald, c. 1600-1610 https://collections.museumoflondon.org.uk/online/object/117832.html

As for the question of the ghost’s identity, we are spoiled for choice: The Elizabethan gentleman could have been Gerard Polman, Christopher Addams, or any one of a number of goldsmiths and jewellers who purchased gems from Addams, all seeking to stake a claim to jewels so dazzling they were said to have made Polman’s cabin look like it was on fire or brilliant enough to light a path on a dark night. Given the beauty and rarity of the collection,  I can’t imagine any of the ghostly claimants so easily relinquishing their hold on the Hoard. And with their murky antecedents, it is surprising that no one has found or “sensed” a curse attached to any of the pieces.

I’m not aware of any recent sightings of ghostly Elizabethan gentlemen in the Museum of London. The articles are not currently on exhibit, but will be displayed in a special gallery opening in 2021. One wonders if the curators have noticed anything in storage?

Any other accounts from the 1920s? chriswoodyard8 AT gmail.com   And what about that bloody neck chain?

For more on the (non-haunted) history of the Goldsmiths, Cheapside, and Elizabethan London and its jewels, see London’s Lost Jewels: The Cheapside Hoard by Hazel Forsyth. The Museum of London has a nice slide show focusing on the collection and is to soon open a special Cheapside gallery.