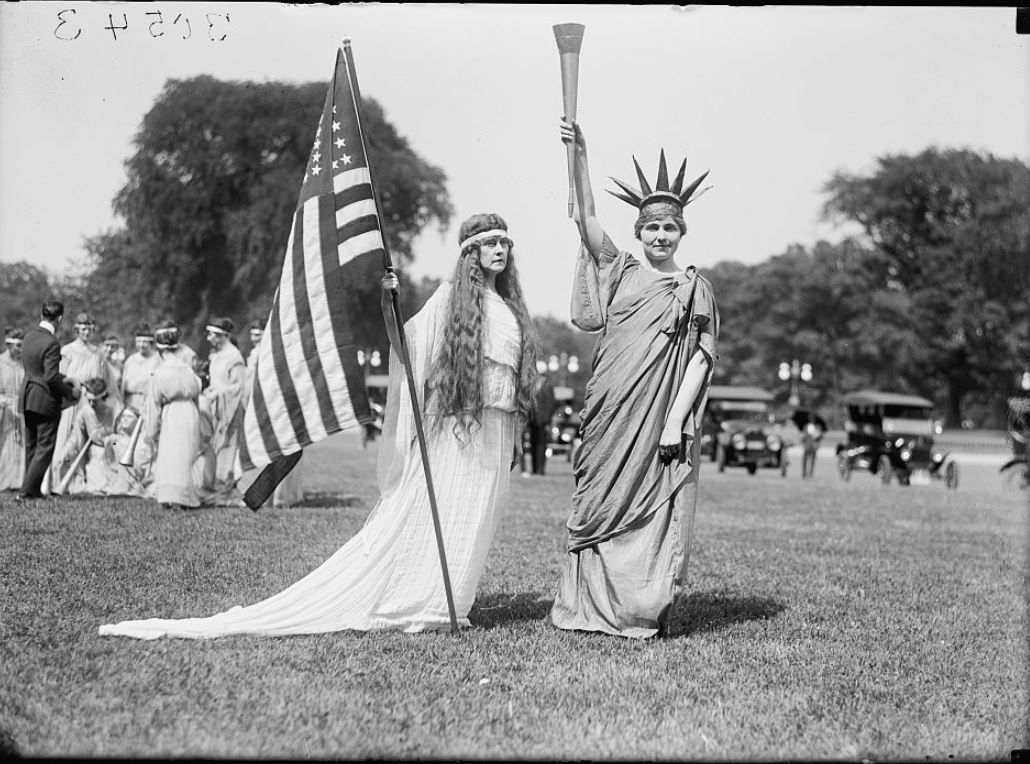 The Haunted Statue of Liberty. Liberty and Columbia: A Patriot Tableau on the Ellipse, 1918. [Image from Library of Congress Prints and Photographs Division Washington, D.C. 20540 USA.]

In a short post as I have to rush off and make all-American chocolate chip cookies, I wish all of you a very happy Independence Day with a story of the “haunted” Statue of Liberty.

Unearthly Noises Proceed from the Interior of Bartholdi’s Emblem.

The Statue of Liberty is tenanted by ghosts. At least that is what the river men claim, and say that the statement is susceptible of proof. They say, and they know whereof they speak, that as the witching hour of night approaches most unearthly noises are heard, as if the statue were possessed.

There is a scientific explanation, however, of these ghostly disturbances, but it does not interest the harbour men and sailors on board ships lying at anchor within a stone’s throw of Liberty Island, their hulls brought into strong relief by the electric torch. Many a “fo’c’s’le” yarn has been spun about the midnight carnival of spirits within the goddess. The sailors in the creaking of her joints hear the ghoulish shouts of the revelers. When the night is calm and bitterly cold the mysterious din is plainly heard.

The most terrifying of these mysterious sounds for those who are not in on the secret are the spirit rappings. The goddess rivals the most expert spiritual mediums. These rappings may be heard almost every night in the year. During the daytime the solemn figure is as quiet as a graveyard, but when darkness settles down it is easy to imagine that several spiritualistic séances are being carried on successfully in this gloomy interior. The explanation is, however, exceedingly simple. The statue, as everyday knows, is formed of enormous plates of copper bronze, firmly riveted together. The action of all sorts of weather to which this very exposed position renders the statue subject tends to gradually loosen these little bits of steel.

The dampness which draws in from the water from all four sides forms a thick coating of copper verdigris on the rivets, eating away the copper. This does not weaken the statue materially, but it affords a certain amount of play between the overlapping sections. The goddess, under the gentle influence of Old Sol. expands throughout every part of her enormous figure. At night she in a measure draws her robes more closely about her; as if to protect herself from the cold. The contraction of the copper sheets, it may readily be seen, causes a gentle motion which produces a very faint rap. But this reverberates through the vast interior, which magnifies it over and over again and lends to it a gloomy, hollow sound.

The members of the guard of honor who attend the goddess throughout the night tell many strange stores of the haunted statue. Several of these watchmen have preferred to give up their positions rather than listen to these remarkable object lessons in acoustics. They could not be persuaded that the mysterious figure was not haunted, and all said that they had never in their lives heard of any haunted house which could boast half as many hair-raising noises as the dignified goddess. It sometimes happens when the contrast of temperature is greatest that the groans and rappings are loud enough to be heard on the boats passing close to the island. The sound of hollow groans, accompanied by weird rattlings and other uncanny noises, has frightened more than one superstitious sailor as he floated across the dark waters. N.Y. Journal.