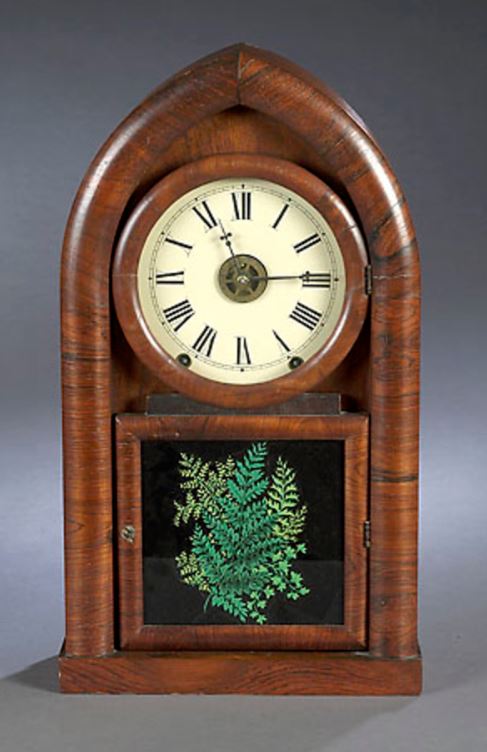 A busy day today mucking about in the newspapers of Des Moines for anti-Irish sentiment (don’t ask) so I thought I would offer a strange little story from Chardon, Ohio about a young man whose face apparently was enough to stop—and start—a clock.

Stop at His Command

And Strike When He Gives the Word.

Weird Powers of a Poor Waiter of Chardon, Ohio, Which Convince Many That he Is Supernaturally Gifted.

And Puzzle the Skeptical, Who Attempt To Explain—Is He a Clever Trickster?

The case of Fred Ebner at Chardon, Ohio, is attracting widespread attention. He is gifted with an uncanny power which is even mystifying to psychists, let alone those ordinary mortals whose knowledge of esoteric powers as bestowed by supernatural agencies is but meager. To the latter he is the embodiment of the cloven-hoofed gentleman. Ebner possess the faculty of stopping and starting clocks by simply talking to them. There are but few who have not had jokingly applied to them at one time or other the distinction of stopping a clock by

SIMPLY LOOKING AT IT.

It’s no joke with Ebner. He can do it whenever he feels like it. A well-known Chicago man who has long been interested in such cases of spiritual endowments happened to be in Cleveland one day and determined to investigate the alleged powers of Ebner. He went there a skeptic and returned thoroughly convinced that the man was no trickster, but had enough of the supernatural in his anatomy to stop an express train at full speed. He arrived at Chardon in the evening and proceeded to the Park Hotel there, where he registered as a commercial man from Cincinnati. In the office he ascertained that Ebner was employed in the hotel as a waiter. At supper time his wants were supplied by the young man himself. Ebner is about 19 years of age [actually 23], very bashful and effeminate in manner. He appeared to be totally devoid of will power. After supper the inquisitive gentleman broached the subject of the waiter’s powers to the hotel proprietor. The latter launched forth into a vivid

DESCRIPTION OF HIS FEATS,

And finally asked him to accompany him to a room where Ebner would give an exhibition. The hotel man’s family were present. The clock was an ordinary wooden affair and stood upon a small bracket covered with newspapers. The room was lighted by a hanging lamp. Ebner stood six feet away from the clock, but directly in front of it. After the preliminary emotions of exerting great will power Ebner said: “Clock, please strike one.” The words had barely passed his lips before the obedient clock struck the desired number. Mice had been a source of trouble to the proprietor and traps had been set to catch them, but without success. Ebner addressed the clock as follows: “Clock, if any mice will be caught in the trap to-night please strike one.” After a short interval the clock struck one Again Ebner said: “Clock, strike as many times as the number of mice the traps will catch to-night.” Again the clock boomed sonorously. The visitor made a close examination of the clock in order to see if there were any wires or secret attachments by the manipulation of which Ebner made the timepiece answer his questions. Owing to the presence of the stranger Ebner seemed to be unable to further control the clock and the exhibition was brought to a close. The next morning the trap, a five-holed strangulation contrivance, contained the dead body of a mouse. Ebner had worked in that hotel for a number of years, but it was not until this summer did

HE DISCOVER HIS ABILITY

To control the movement of the clock. He has also operated with success upon others. One day he told the proprietor that he believed the old clock which was merrily ticking the minutes away on the bracket would stop if he told it to do so. The hotel man thought the waiter had been against the bamboo, and sarcastically told the latter to stop it with an ax. Turning to the clock, Ebner said slowly: “Clock, please strike one for Mr. ___.” It did so, and its quick response naturally produced goose flesh on the startled proprietor. “Clock, stop running!” commanded Ebner. The pendulum wavered and finally came to a full stop. It started its monotonous singing again. “Tick faster and louder,” said Ebner. The pendulum left its accustomed orbit and actually hit the sides of the case in its endeavor to obey him. The proprietor thereupon told him that thereafter he would not have to work overtime. One day while engaged in making the clock strike at command the cook calmly advised him to cease his foolishness or he would get hurt. “Why, I can make it strike a hundred times if I want to.” The cook

CHALLENGED HIM TO PROVE IT.

“Clock, strike 100.” It had struck 69 times when stopped by the cook, who grasped the pendulum with both hands. The cook picked up a cleaver and the waiter wisely left the room.

On one occasion Ebner commanded the timepiece to strike as many times as the number of years a lady present was old. The clock struck 38, which the lady admitted was the correct number. On starting on a two weeks’ visit last summer Ebner said that while he was gone the clock would strike, but one time for each hour while he was away, and that as soon as he returned it would begin striking the hours properly. Sure enough, as soon as he left the house the clock struck but once each hour. The cook took the clock apart, cleaned it, put it together, put the hand on 10, which was the hour, and at 11 o’clock the clock struck one, and it continued to strike one until the hour Ebner returned to the house, when it struck 10, that being the time, and from that time continued to strike properly. Ebner talks to the clock as if it were endowed with reason, and expects an answer just as he would from a person. The strange part of it is that Ebner has never failed to get the reply. He speaks to the clock from a distance of eight or ten feet; in fact, wherever he happens to be. The whole thing is so uncanny as to be beyond belief, but he has done all herein stated by the skeptical gentleman.

To be fair, this seems to be a single-source story and some of it (the clock not working in the presence of a stranger, the predicted mouse found in the trap) is easily explained. The clock’s hi-jinks while on Ebner was on vacation are a bit more difficult. And striking the age of a lady of a certain age was just plain foolish.

I had hoped to find other versions of the story, or information that might give a clue as to whether Ebner had a penchant for pranks or deception, but the census and the newspapers tell of an uneventful life just ticking along as unmarried assistant cook, waiter, and sand-boat steward living with his parents and later with his sister and brother-in-law. He died in 1962.

Was this a short-lived phenomenon as PK often is? Or was it just a clever conjuring trick using some mechanical device?  Any other information on Fred Ebner, his obedient clock, or the identity of the inquisitive Chicago man?  chriswoodyard8 AT gmail.com