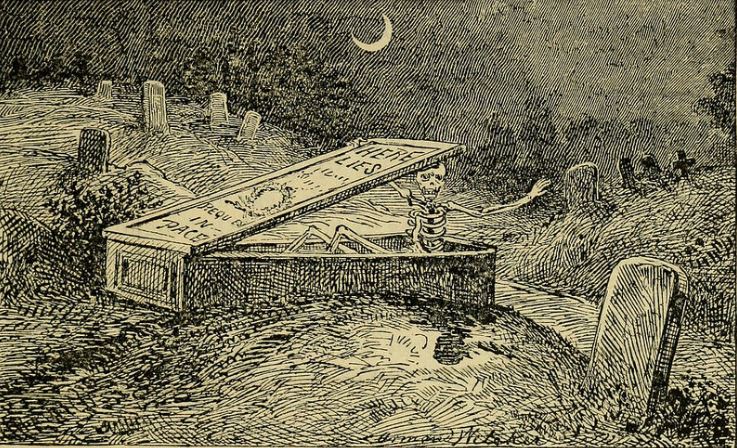 Recently a professional escapeologist had a brush with death. He was just moments away from suffocating under six tons of dirt—without benefit of coffin—but says he will consider taking another dig at it once his broken rib heals.

Frankly, even reading about such things makes me hyperventilate, but “burial alive” stunts were a popular carnival attraction in the 19th and early 20th century. There were dozens of these self-immurers going about the United States. Most of them called themselves by pseudo-Hindu names and claimed to have mystic fakir powers, supplemented, of course, by exit tunnels and breathing tubes. Here is a candid interview with a “professional corpse.”

How It Feels to Be Buried Alive

The Remarkable Confession of George Hausam, a “Professional Corpse,” Who Has Forsaken the Most Gruesome of all Trades, and Tells Why.

There is a whole lot of difference between fasting in a coffin and thousands of people looking down at you at 10 cents per look, and doing the same stunt in the wintry streets with no place to sleep and not a cent for your trouble.

This is my opinion as a professional corpse, and it ought to go. I have been making my living by being buried alive, and I know how much easier it is to starve in a coffin than on the streets. You can get something to eat and drink down in the coffin, but I’m blamed if I could up on the streets.

Just now I don’t have to worry about either, however, because I have a commodious cell quite a bit larger than a coffin and three square meals a day. I don’t have to play dead to get them, either. I am doing thirty days in the county jail for taking a raw beefsteak in St. Louis. There is no demand for professional corpses during the winter months and I had to do my fasting above ground instead of below. That was too much; I was actually starving.

I was always a little stiff after a nine days’ trance in a coffin but I was never hungry and I always managed to get a good sleep every day in my coffin. Then besides, the girls who like to visit such places, made a hero out of me every time I came out, and that was something.

I just drifted into the professional corpse business by chance. I was born in St. Charles, Mo., and lived there all my life. I learned the carpenter’s trade, but I guess I didn’t work much. Most of the time I had charge of the opera house there, and sometimes I drove a team. A year ago last summer a man came to the town with this buried alive game and I paid a dime to see it.

The minute I looked down the tube at the corpse in the coffin I knew that the thing was impossible if it was done on the dead level. So I just hung around and watched, hour after hour. I paid my dime at noon and at midnight. I was still glued to the other end of the tube, watching the man in the trance who had allowed himself to be buried alive.

I knew he was buried all right. I had seen the grave dig seven feet deep and I had seen the box planted in it. I had seen the professor make strange motions with his hands and put the fellow in what he called a hypnotic spell: I have seen the lid screwed down and the man actually buried alive. When I looked down the rube the man was still there. He seemed fixed tight enough, all right, and I couldn’t see how he managed to live.

So I kept on watching, never leaving the tube for a moment. This was too much—the fellow down in the coffin would have actually died if I had kept at the tube much longer. Then the professor took me aside and told me he would put me wise to the secret if I wouldn’t tell anyone. I agree and he kept his word. The whole thing was dead easy.

The more I thought of it the slicker the scheme seemed to be. It looked like taking gumdrops from a baby. So when the regular corpse fell sick and had to retire from business, I took his place because I wasn’t working and needed the money. I made a hit from the start and developed into a most up-to-date professional corpse in the business.

We showed in all the surrounding towns and took in the coin. When the Jefferson Club had their carnival last fall at Handlan’s Park we secured the privilege of making an exhibit. According to the agreement, we had to give the club 50 per cent of the receipts and I was to get one third of the remaining 50 per cent.

When they lowered me into my grave and the professor announced that he had hypnotized me and that I was to remain buried alive for nine days, the crowd stood around with bulging eyes. The professor took especial care for everybody to see that I took nothing down in the coffin with me and that there was no possible way for me to live, so long save in a state of suspended animation. It was to be my first long stay.

Of course there was a trick about it. But in spite of this fact it was the awful lest torture to stay there in one position that could be imagined. I lay on one side with one eye closed and the one next the pillow open. A tiny electric light bulb burned near my face. Well, at first I thought of foreign lands and concluded to take a trip across the ocean in fancy. I am a man of wide range of imagination and this was possible under the circumstances.

I knew considerable about geography and I went all through the details of purchasing my railroad ticket, riding on the cars to New York, getting passports, buying the steamer ticket, making the voyage, etc. I saw the great waves rolling over the bosom of the ocean, heard the rumble and crash of machinery, listened to the conversation of my fellow-passengers, and even tried to imagine myself a trifle sea sick. I knew I would have to stay there a long while, so I made the trip string out.

First I visited London and saw the famous Tower. I went over to Ireland in my mind and rambled about among the lakes and the ruined castles. In Scotland I tramped over the bonny heather where Rob Roy and his hardy Highlanders used to hold forth, and I spent quite a lengthy time among the Manxmen on the Isle of Man.

Then I went to Paris and saw the scenes of which I had read. I always admired the works of Washington Irving, and I had a comparatively pleasant time strolling through the Alhambra. I remember I was just inspecting the Court of Lions where the noble house of Abencerrage was extinguished at one session, when I heard a voice ask me if I would like to have a bottle of beer and a cigarette.

Opening both my eyes I looked up and nodded. I slid back the lid of the coffin, moved up a bit, drank the beer and smoked a cigarette, the smoke going out of the smaller tube that came down into the box. Then I had a light lunch, read the morning paper and stretched back on the pillow till the attendant above gave me the signal that someone was coming. I could move around some and move my position. I had a sufficient quantity of air through the big tube which overlapped the head of the coffin, and when no was looking I could sit up. Then I had beer and everything I wanted to eat. These things were easily slipped down into the casket to me. I could also slip things up. A string was lowered into the tube and I attached anything to it I did not care for. The only objection was the terrible solitude.

After that I toured—still in mind—in Europe, Asia and Africa. I was just thinking of going to South America when I fell asleep. When I awoke up the bad air from the cigarette had all disappeared and I breathed much easier.

The attendant looked down and I tipped him off quietly that I wanted a newspaper and something to eat and drink again. After a while I got so accustomed to the sounds above me coming through the solidly packed earth that I could tell whether an attendant or a pay visitor was approaching. The police were watching me closely, but I soon got so that I could tell the heavy footfall of a policeman every time. They never caught me off watch.

It was sport to peer up at the folks who looked down at me through the tube. I could hear anything they said. The colored people were always frightened.

“How nachul he done look!” was what they always said.

Sometimes I used to look up at them and wink. They suddenly lost interest and fled when I did this. Often I heard people say it was a fake, but they could not see how it was done.

It takes a man of the steadiest nerves to be a professional corpse. Finally he will become hysterical. Why, there were times that I felt that I could not stay there a single moment longer. Once I signalled for them to let me out. The professor threw down some morphine tablets, and told me to take one and I would feel better. I shook my head and he sent me down a bottle of beer. I drank this and it quieted me. My health is not what it was. Every man who has ever held this position with the exception of myself, has become a dope fiend.

So I got out of the business, but I hunted for work in vain. I wandered about for several weeks until all I had was spent and then I slept around as best I could. Finally I had nothing to eat for forty-eight hours, and I was driven to desperation—was starving. I saw a butcher’s box filled with beefsteaks, and I lifted the lid and took one of them. The butcher saw me and followed me for five blocks before a policeman caught me. I was sent to jail and here I am. When I have served my thirty days I will go to work as a carpenter. I will never be buried alive again, thank you.

We have to admire that, throughout all his trials, the Professional Corpse kept his promise to the Professor and was as silent as the grave about the “trick” to being buried alive. He probably could have bought his own beefsteaks if he had sold it to the highest bidder.

But exactly how was it worked? Or does that violate the Magician’s code? Tell me, and when you clap your hands I will awake and remember nothing.  chriswoodyard8 AT gmail.com

Josie sent me this wonderful article detailing exactly how the trick was done, including an illustration. It’s from The St Louis [MO] Post-Dispatch 14 January 1906: p. 50