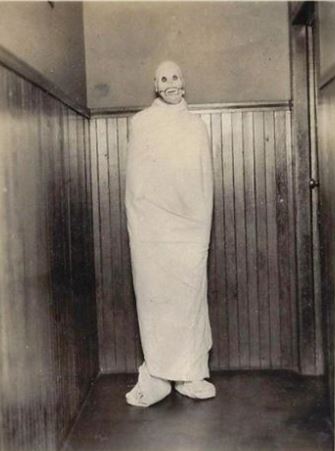 One can only dwell on tales of horrific Victorian executions and methods of corpse disposal for so long. Let us lighten the mood with an amusing little tale–told in the vernacular–by Robert Ernest Vernede, author and poet, who died in the Great War.

TALE OF A GHOST

He was a thin, weak-legged old man, with a chronic cold and a grievance. I had met him in a country lane, shuffling along with a piece of rope in one hand and a stable lantern and some bits of old iron in the other. He told me his profession with a child-like vanity that was not without its charm, and, warmed by a pint of bitter I stood him at a wayside inn, he enlarged upon his grievance.

“It ain’t wurf it,” he said, “not by a long chalk it ain’t. I’ll give it up, that’s what I’ll do. It’s them blue lights and signtific contrapshions as does me. Nobody never asked for blue lights when I fust started. They ‘and’t thought of ‘em neither.”

“Thirty-seven years come Michelmas,” said the old man, proudly. “I was the fust profeshnal ghost, as you might say, in the country, and there ain’t many now as ha’ done what I done. How I know it was 37 years come Michelmas, I was a-working on the pump at Buntford, an’ they putt the figgers on it. I ain’t a scholar mesalf, but I’ve heard me niece read ‘em—“

“What used you to be, then?”
“Bricklayer. That’s how I come to be a ghost—along of Mr. Frank Burrers, which I dessay you’ve known the name of. “’E come up to me one night—we was repairin’ an old ‘ouse, ‘Grimbles’ they call it, which Mr. Richard Price, as owned the ‘ouse, and ‘is father before ‘im was wishin’ to sell. Seems Mr. Frank Burrers liked the ‘ouse, an’ they do say as he’d bid for it; but Mr. Price, he wanted more money than what ‘ad been bid. That was how it was when Mr. Frank Burrers he comes up to me, and sez he, ‘John,’ he sez, ‘that’s a old ‘ouse you’re workin’ on.’ ‘That’s what it looks to be,’ sez I. ‘They do tell me,’ sez he, ‘as it’s ‘aunted. Did ever you ‘ear any queer noises while you was about—clankin’ o’ chains at night an’ strange footsteps?’ I never hadn’t, an’ I told Mr. Burrers so, saying that what was more, I didn’t believe there was such things as ghosts. ‘Well, well,’ sez he, soothing like, ‘some folks do and some folks don’t. As it ‘appens, it ‘ud pay me if that there Grimbles was ‘aunted.’ ‘You don’t say it?’ sez I. ‘Yes, I do,’ sez he. ‘It ‘ud pay me and it ‘ud pay you.’ ‘What do you mean?’ sez I, wiv me ears up. For we just finishing wiv the ‘ouse, an’ I ‘and’t no job fixed arter that, and the winter comin’. ‘I mean that if you was to ‘aunt that ‘ouse it ‘ud be money in your pocket, John,’ sez he. ‘I dessay it’ ud come nigh to 16 shillin’s a week. You’d have to ‘aunt it fair an’ square, mind—no shirkin’—hours 9-7 reg’lar; and if there was anyone comin’ to look over the house wiv a view to purchase, you’d have to put in a bit of extra ‘auntin’. It wouldn’t be wot you’d call ‘ard work, but it ‘ud have to be steady, so that folks get to know there’s a shoes up to Grimbles as walks reg’lar.’

“Well, the end of it was that I took the job. I didn’t like it at fust, thin’ as how it was a come down from being a bricklayer to be a ghost. Once or twiced I felt lonely-like an’ thought o’ giving it up, but arter a while it began to grown on me, an’ in four weeks Mr. Frank Burrers he bought the ‘ouse for £200 less than what he’d offered for it fust. He giv’ me my 16 shillin’s a week an’ two pound extry, an’ sez he, ‘I’m goin’ in for a bit o’ properthy-buyin’ in different parts o’ the country, an’ if you like to sign on wiv me reg’lar, why, you can come down wiv’ me an’ ‘aunt such ‘ouses, as they’ve got too big a price up on. ‘Auntin’ seems to suit you,’ sez he, lookin’ at me. ‘You won’t never be stout; but you ain’t so thin as I’ve seen you.’”

“I did,” said the old man. “Seven year I worked for him—Essex—Yorkshire—Souf Wales—Worrickshire—I bin in all them places durin’ that time ‘auntin.’ Sometimes I was a lame ghost; sometimes I ‘ad one arm, or I jingled me spurs or me chains. Once I kerried me head under me arm, an’ Mr. Burrers he paid me 18 shillin’s that week. I used to be able to groan nine different ways an’ all of ‘em ‘orrible. Sometimes it was the gall’ry I ‘aunted, and then again it was a garret or a shrubbery. It all depended on the fambly history. Mr. Burrers used to read it up an’ tell me what to do.”
“Did you ever frighten anyone?” I asked.

The old man looked at me with ineffable scorn.

“’Underds,” he said. “Care-takers, pleecmen, poachers, intendin’ tenants, girls wot had arranged to meet their young men thereabouts, curits, ‘ouse agents’ clerks—I’ve frightened ‘em all, an’ not bin nabbed once. I eud frighten ‘em still, if times was wot they used to be.”

“They’ve changed, have they?”
“Mr. Burrers died, an’ arter that I never had the same prospects. There aren’t any re’glar employers o’ ghosts. Gen’ally it’s bin a company as has giv’ me a job—wantin’ either to redooce the price of a ‘ouse, same as Mr. Burrers; or to advytize a seaside place. There’s a good deal o’ advytizing done that way o’ late. Them trippers get tired o’ the pier an’ the [minstrel shows] an’ drivin’ to see a monument. Then we starts a ‘aunted ‘ouse a few miles. P’r’aps it’s by arrangements wiv a job-master an’ he drives folks out to see; p’r’aps it’s a hotel proprietor that takes up the notion.”

“But it’s not as good a profession as it was.”

“Not by a long way. They wants it signtific—blue lights and such contrapshions. ‘ad to spend two shillin’s on blue lights on’y yesterday out o’ 14 shillin’s a week. I’ll ‘ave to give it up; that’s what I’ll ‘ave to do.”

I paid the price of another half-pint, and left this interesting old man still lamenting the downfall of his profession. It really seems that even ghosts should have to move with the times. Black and White.

Ghost-‘unters still wants it signtific…. to judge by all the electronic gadgetry that pervades paranormal TV. It was ever thus. See this post on “The Psychic Howler” and other early ghost-hunting equipment.

Any non-fictional tales of genuine “professional ghosts?” ‘aunt me at chriswoodyard8 AT gmail.com