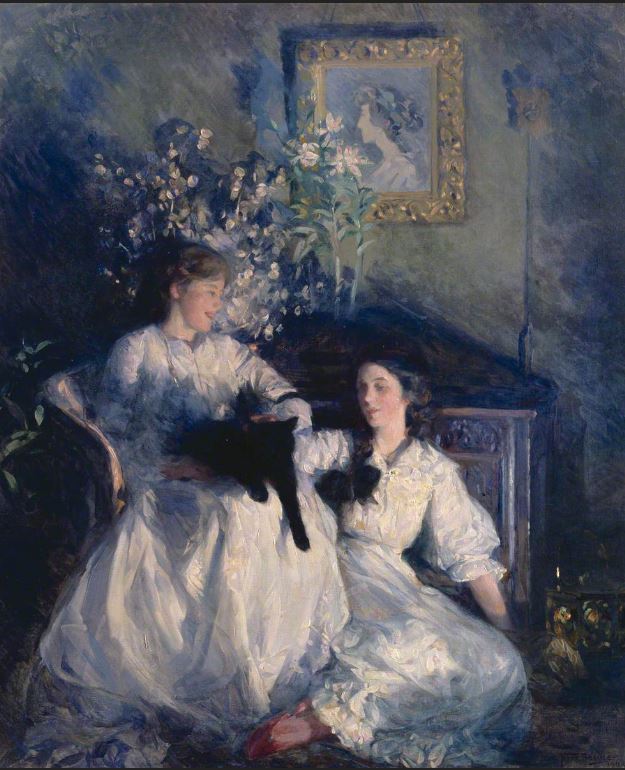 Unnatural Love and a Ghost in 1897. Confidences, Frank Bramley artuk.com

This little item, from 1897, is extremely unusual in its bluntness about “unnatural love” between these two women. Such things were usually only whispered, if acknowledged at all.  It is perhaps most interesting for the social history it hints at, rather than its “ghost” element. Ghost hoaxes are extremely common in the 19th century press. Often they are perpetrated for financial gain: to scare someone off a desirable piece of property or get out of a lease.  More usually, they are simply designed to frighten a person or community. This ghost hoaxer’s motivation was unique.

Wellsville, O., Jan. 15. For some time the life of Mrs. Frank Campbell, who resides with her husband between Ninth and Tenth on Commerce street, has been a burden to her.

She and her husband have not been getting along as amicably together as they thought they would in the halcyon days of their courtship, the reason being that Frank is said to have become possessed of the idea that he no longer holds a monopoly of his wife’s affections. Strange to say he does not charge her with bestowing them upon another man, but upon a woman, who is no other than Mrs. Mellor, wife of Charles Mellor, a well known Main street business man.

Campbell strenuously objects to the sociability which exists between the two women, and in order to break it up he some time ago conceived the idea of inducing his wife to leave their present place of abode and to reside elsewhere, believing that if he could place sufficient distance between them that their sociability would sooner or later die a natural death.

Mrs. Campbell refused to move, however, the most earnest entreaties of her liege lord failing to have any effect upon her. Frank then told her that the house was haunted, and to substantiate his claim he told her that nearly every night about midnight he was awakened by strange sounds, which seemed to emanate from the region of the porch at the rear of the house. She had not heard them, but in order to prove or disprove her husband’s assertion she remained awake one night last week and strange to say, when the clock struck 12, the noise began.

She, of course, was greatly frightened and her husband professed to be also and neither of them had the courage to go and investigate. The same thing was repeated regularly night after night at the hour of midnight and became so pronounced that Mrs. Campbell was about to accede to her husband’s wishes and leave the neighborhood, when she made an interesting discovery. It was on Wednesday night of last week. Her husband was more sleepy than ordinary, and soon after retiring, cozily ensconced himself in the arms of Morpheus, and was soon oblivious to everything. Not so with Mrs. Campbell. Her nerves were getting shattered and sleep would not come. About 10 ‘clock she went to get a drink of water. On going thither she stepped on something and was almost thrown to the floor. She thereupon made an investigation and to her intense relief, she tripped on a rope, which extended from her husband’s side of the bed to the outside of the kitchen door. At the outer terminus of the rope was attached a monkey wrench, which would trip the door at the option of Campbell. Her feelings may more easily be imagined than described. It is safe to say, however, that since the discovery, home life has not been very pleasant for Frank.

The fascinating Mrs Mellor seems to have had a rather checkered career.

Wellsville Mrs. Charles Mellor, the wife of a Main Street tailor who mysteriously disappeared a few weeks ago, returned yesterday, but received a chilly reception from her liege lord, who declares he will not take her back and that the separation must now be final. The disappearance of the woman caused no little sensation here [anyone have any other newspaper articles or family legend on the subject?], and her actions cannot be accounted for. Mellor patiently awaited her return, but receiving no tidings took legal possession of his household goods, so that when Mrs. Mellor came back she found herself without a home. She sought a refuge at the house of her father. The Mellors had been married for seventeen years. Cleveland [OH] Leader 22 May 1886: p. 5

That “liege lord” stuff grates and must have done even in 1886 or 1897 to any woman of spirit. But it jokingly expressed the accepted social fiction that wives must Submit–or give the appearance of submitting. If the article about Mrs. Campbell is correct, Mrs. Mellor must have submitted rather abjectly and the Mellors must have–at least temporarily–patched up their martial differences. One wonders where she went when she disappeared.

As for the ingenious Mr. Campbell, It does not appear that a divorce immediately followed the discovery of the ghost hoax; the couple had a child in 1899. However, Frank Campbell was not widowed and is buried with a different wife named Pearl in Wellsville while the first Mrs. Campbell is buried in Belmont County. He meant to throw a spanner in the works; he only succeeded in wrenching his marriage apart.