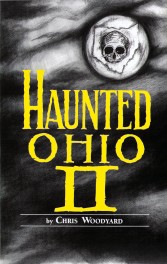 They’re baaaack….. Those Buckeye ghosts just won’t stay buried. Over 100 more tales from around Ohio including the ghostly guests at the Buxton Inn, a real Jaycee Haunted House, and the many ghosts at Dayton’s United States Air Force Museum. Beth Scott and Michael Norman, authors of Haunted Heartland said this about Haunted Ohio II:

“Ohio has a ghost hunter and writer of the first magnitude in Chris Woodyard. Her chilling tales will keep even the bravest reader checking to see that doors and windows are securely locked. Several of the stories, such as ‘The House of Hate’ are as compelling as any Stephen King novel. Here’s a gem of a book to thrill anyone who enjoys a good scare. And that includes us!”