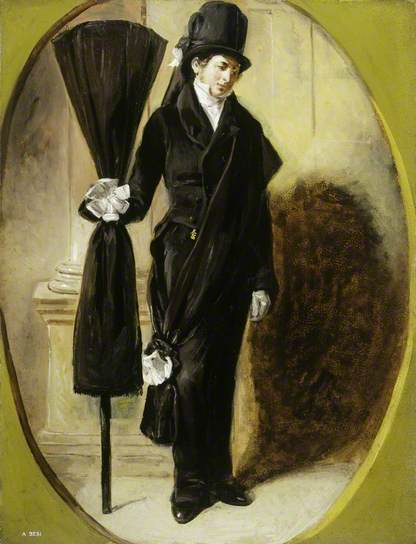 We are all familiar with the more usual tokens of death: the picture falling off the wall, the howling dog or hooting owl, the tap of the Death Watch Beetle or the stopped clock. Some of us may also know the less common death omens: the butterfly of doom or ships with black sails, but it is the specifically mortuary tokens of death that fascinate me: the sounds of a phantom funeral, or visions of a spectral hearse or coffin. The following story, which is unique in my experience, features two funeral mutes as the terrifying messengers of death.

‘In the year 1856 we were residing in a rented house in one of the midland counties, with our family and servants, near which temporary residence my husband, an officer in the army, had a command. For reasons upon which I need not enter, a change of position and locality had been much pressed upon the authorities in London, on my husband’s behalf, which, after the expiration of some time, was determined on by them; and we found ourselves likely to go to Scotland; the exact change for which my husband’s friends had asked, and which we each desired, for it was not far from the home of some of those who were very near and dear to us.

‘As there was considerable difficulty in obtaining a suitable and sufficiently convenient house at the place where we wished to reside, my husband went on to Scotland a month before it was intended to take me and our family. I therefore remained with our household in England. With the exception of my children and servants, I was quite alone. Our hired residence, surrounded by considerable grounds and plantations, and situated on the slope of a hill, was quite isolated. No other abode was nearer than a quarter of a mile ; and that was the lodge where our gardener resided. Our drawing- room was on the first floor, outside of the windows of which rose a balcony of iron and wood, connecting this room with my bedroom (which adjoined it), and my husband’s dressing-room, which was furthest off, all of which rooms, by glazed doors, opened on to the balcony in question.

‘One evening, between nine and ten o’clock, in the month of September, I was seated in the drawing-room. My maid had brought me some coffee, and was arranging my work-table and books prior to my retiring to bed, when I arose mechanically and walked out on to the balcony through the open door, as was often my custom, to look at the beautiful landscape in the moonlight. The moon was up, and the whole of the valley below was bright, almost as bright as in the day. Greensward and brook, wood and copse, were seen in the distance; with a large dark mass of stately elms, below which a cluster of Scotch pines stood to the right. The stillness was marked and almost unusual; the landscape lovely.

‘Suddenly, turning my eyes to the left along the balcony, I beheld all at once the figures of two men, dressed as mutes at a funeral, with hatbands, scarves and cross-poles covered with black silk, standing at the glass door of my husband’s dressing room. They did not seem in the least degree spectral, but too truly and too perfectly real. For a brief moment this was my certain impression; but on looking steadily at their forms for a few seconds, they began to have a less substantial, and a more transparent and cloudy appearance. Awestricken and overcome, I fell back through the drawing-room window, with a shriek and a stagger, into a chair. My maid, who was still in the room, rushed forward to my aid; and for a few seconds I believe that I entirely lost my consciousness. On recovering myself partially, but wholly unable to speak many consecutive words, I cried out to her, pointing in the direction of the figures, “Look there—there!”

‘She looked out on to the balcony, and there beheld the two gloomy forms as vividly and keenly as myself. It was a surprise and a shock to us ‘both.

‘She rang for the man-servant, who, coming up, was at once asked if he could see anyone or anything outside his master’s dressing-room door on the balcony.

‘Looking in the direction indicated, he replied that he could not. “There is no one and nothing there.”

‘“There are no men there,” he answered; at the same time that he walked out, and approached the spot where the figures we still beheld stood.

‘I and the maid watched him as he boldly walked up to the door, into the room, and actually passed through the spectral forms which still stood there. They did not swerve, they did not stir. The dressing-room was as usual, the man asserted. No mortal was there. The man-servant maintained that both the maid and I were dreaming.

‘For a while, the figures seemed to both of us as solid and lifelike as possible. There they stood in the clear moonlight, erect, weird, motionless, and spectral. In a short time they began to grow less distinct, and as it were, cloudy and dim, in their lower parts, but yet, as manifest as ever in the upper; and then, in about a quarter of an hour, they had utterly faded away.

‘I was overcome and puzzled to a degree which I cannot describe and could not measure. The thought of my husband’s safety—for which 1 prayed—smote me at once, and was constantly before me, and yet at the same time I felt a weight of sorrow and a foreboding of loss which so completely took possession of me, that I could neither talk nor cry. Tears would have been a relief; but they did not and would not come.

‘Within an hour, my maid occupying a sofa in my bedroom, I had been induced to retire to rest ; almost glad to be convinced at one minute by the arguments of the man-servant that what I had seen was the result of my imagination, and yet utterly unable either to get rid of the pressing load of anxiety on my mind, or to secure sleep.

‘A night-light burned in my room; and from time to time a few commonplace words had been spoken between myself and my maid. The time passed slowly. Midnight had come; I think I was dozing.

‘All of a sudden we heard a loud and startling knock at the principal entrance of the house; so sudden, so loud, and so startling, that the manservant, who slept on the ground floor, suddenly awakened, speedily rushed to the front door.

‘He opened it as quickly as possible. But as he solemnly and affrightedly affirmed, there was no one there, and no sign of anyone, as he told me at my bedroom door. The moon was still up; my maid and I looked out once again on to the balcony: the landscape was clear. Not a sign. Not a sound. All was still. “These things,” said I to myself, “are some blessed angel’s warning of a coming calamity,” and this thought (for I had always believed in angelic intervention) was upon me throughout the rest of the night. I did not begin to sleep until the morning had broken, and the sparrows were twittering on the roof. But constantly I commended myself to God the Blessed Trinity in prayer.

‘On the following evening, my husband’s brother came to announce the overwhelming tidings that my children were orphans and that I was a widow.

‘ My husband had died almost suddenly of heart disease, at his temporary residence in the north of Scotland on the very night in question; and these strange warnings for eye and ear were no doubt mercifully sent to me to break the severity of the shock which news of a sudden death must have given. Here is the finger of God. How often afterwards, and how fervently, have I prayed to God in the beautiful words of the collect for St. Michael’s Day in the “Book of Common Prayer,” “As Thy Holy Angels always do the service in Heaven, so may they succour and defend us on earth, through Jesus Christ our Lord.” ’

The sharp rapping on the door was a common death-omen. Some banshees also knocked on doors, rather than screaming. 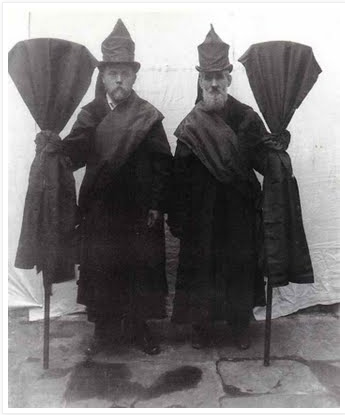 Funeral mutes—the “funeral men,” as the maid calls them, were, for a long time, an essential part of a Victorian funeral. They carried wands swathed in black and were stationed mournfully outside the house of the deceased. They also marched in the funeral procession to the cemetery. Mutes were paid by the job and were rarely from the most refined social classes. They were often a figure of fun in Victorian literature and journalism. But there is nothing amusing about these sinister Mutes in Black,  uniquely Victorian messengers of death.

Other death omens with a mortuary theme? Swathe in crape and send to chriswoodyard8 AT gmail.com

You’ll find information about professional and amateur mourners in The Victorian Book of the Dead.