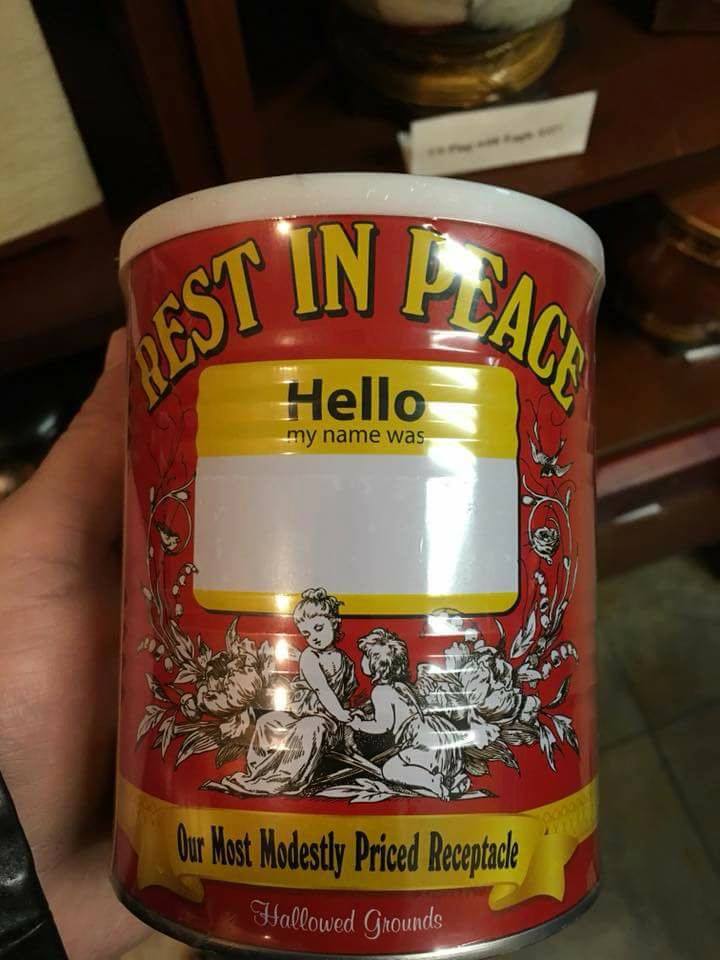 Recently I noted some startling tabloid-fodder in the British press;  an article about a daughter grieving her late mother, who decided to eat her Mum’s ashes with her Christmas dinner. She was quoted as saying sadly, “I feel like she can live on by being inside of me.” Comments on the story ranged from sympathy for her loss to harsh words about her mental state.

It is such a strange and unpalatable story (is there a medical term for this curious taste–parental pica, perhaps?), but if you can’t trust the Mirror, who can you trust?

Since this blog is nothing if not topical, here is a similar story from 1901. At that date, cremation was a relatively new idea (The first modern crematorium in the United States was built in 1876; the first in England in 1878.) and its proponents were sometimes seen as eccentric or even mad. In this story, an excerpt from The Victorian Book of the Dead, we meet Mrs Matilda Francefort, who took to heart the sentiment: “bone of my bone; flesh of my flesh.”

One Widow Reported to Have Eaten the Ashes of Her Husband

A good many queer things have happened in connection with cremation, but perhaps the strangest of them all was the case of Mrs. Matilda

Francefort. Matilda ate her husband, which sounds cannibalistic, but isn’t.

In 1896 Mr. Francefort left his sphere of usefulness in Brooklyn and his soul, it is to be hoped soared to a better world. As for his body, they took it to Fresh Pond and cremated it. Then his widow went after the ashes and took them carefully home with her. All widows do not. Some don’t even buy a niche for them at the crematory or pay storage for them in the cellar.

But Mrs. Francefort was different. She got the ashes of the late Mr. F. and carried them home in a japanned tin box, like a tea canister or a spice box. Perhaps that was suggested to the sorrowing widow the disposition she should next make of them.

At any rate she decided to eat them. There was much to be said in favor of this plan. It was economical. She would save the expense of an urn and niche and a monument by being all that herself. Then, too, she and the dear cremated had lived together for 31 years and she was lonesome without him. She was informed that the ashes would enter permanently into her system and it seemed to be a clear case of eating your cake and having it too. Anybody could see that under the circumstances it was the only way of keeping the family together.

Having decided to eat her husband, the next question was the manner in which he should be served. Mrs. Francefort went over his qualities with a sorrowful heart. He had been a witty man; there was always a spicy flavor in his conversation. Mrs. Francefort made a note: “Spice.”

Then she defied anybody to say that he had not been the salt of the earth. Another note: “Salt.” Still she had to admit that he had a bit of a temper. Note number three: “Pepper.” But then, he was always sweet to her. Final note: “Sugar.” Clearly Mr. Francefort’s post-mortem specialty should be in the condiment line. Mrs. F. determined to take him as seasoning.

So she put a pinch of him in her coffee at breakfast and sprinkled him lightly over the boiled shad. At luncheon he went into the tea, and contributed distinction to the lamb stew. At dinner—well, at dinner the supply of Mr. Francefort’s ashes went down in more ways than one. And whatever the gentleman may have done in life, there is one thing sure, he never disagreed with his widow when he was dead, though a little of him did perhaps go a long way.

Was this just a whimsical flight of fancy by the author?  Mrs. Francefort is found in several other newspaper stories when she was involved in a lawsuit over timber rights. The tongue-in-cheek flavor is often found in news stories about human remains. Perhaps a little gallows humor was required for audiences to swallow such a grim tale.

Here is story of a similar piquancy, although I cannot find this “ludicrous mistake” in any of Twain’s published works. It is likely that the celebrity’s name was added to a well-known anecdote. There was a variant of the tale where the tooth-brusher was a servant girl.

I was told yesterday a rather amusing story at the expense of Mark Twain—and the same story is already a standing joke in society. Not long ago the humorist was traveling in the country and stopped one evening at a house presided over by an elderly woman. He was shown to a room somewhat bare of ornament and furniture, yet slept peacefully until morning. When morning came and he arose, he became mindful of the fact that although he had provided himself with a toothbrush, he had forgotten his toothpowder. He consoled himself with the thought that there must be tooth powder lying somewhere about. After a brief search he discovered something in a small box on the mantel, which certainly resembled tooth powder. At any rate, he used it vigorously on his teeth and found it satisfactory. When he got down stairs he apologized to his hostess for using her tooth powder. She appeared surprised. “What tooth powder?” she inquired, blandly. “It was on the mantel,” Mark replied. “On the mantel?” she repeated. “Yes, in a small box. It was excellent,” he declared. “Good gracious!” she ejaculated. “That wasn’t tooth powder!” “What was it?” asked Mark, now slightly alarmed. “Why, that was auntie,” said she. (It seems that “auntie” had been cremated.)

I’ve speculated before about the possibility of a hoarding disorder involving a loved one’s remains. If the stories about eating Mum or Mr. Francefort are not urban legends, they, too, might fall into this rare category.

In 2011 a widow who said that she was addicted to eating her husband’s ashes was profiled on a show called My Strange Addiction. Other historic cases of dining on the detritus of the dead?  (Other than the well-known ritual to prevent a vampiric relative from preying on surviving family members….) chriswoodyard8 AT gmail.com