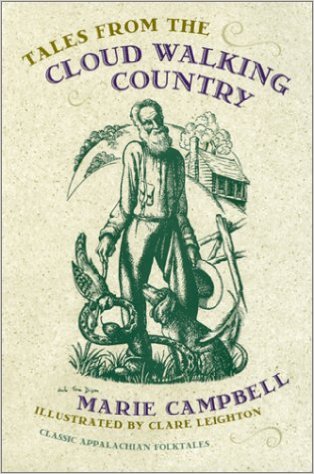 It is #FolkloreThursday, so what better day to ask for help with a folklore problem–that of some missing manuscripts on Kentucky ghosts and fairies. And if you’re not interested in missing manuscripts, I’ve added an alternate post on How to Bewitch Rats, which may be of interest to householders in Kent currently plagued with cat-sized rodents.

While doing some work on fairy-lore, I noted something interesting in the “American Fairies” entry in Katherine Briggs’s Encyclopedia of Fairies. The entry mentioned a thesis on fairy stories from the hill-country of Kentucky by Marie Alice Campbell and said that a volume was shortly to be published.

I was able to get hold of Miss Campbell’s thesis, Olden tales from across the ocean waters: A collection of seventy-eight European folktales recorded from the oral tradition of six Eastern Kentucky narrators (1956). As the entry for Google Books says about this thesis:

In 1926 the author began teaching at the mountain settlement school on Caney Creek in Knott County, Kentucky where she began researching and collecting folktales whose origins could be traced to Germany, Ireland and Scotland. She traveled to remote areas that could not be reached by outside world except by foot, horseback, or jolt wagon in order to transcribe the tales told by old-time storytellers along with the history they ascribed to the tales. This dissertation was presented as the first of five volumes. The tales in this volume were collected in Letcher County from 1927-1934.

The thesis turned out to be something of a mixed bag. On one hand it was a delightful collection of European fairy tales like “Donkeyskin,” retold in the idiosyncratic hill-country dialect. On the other, there were no stories of “real” fairies as was suggested by Briggs’ note, although perhaps “fairy stories” was simply ambiguous. Yet, tantalizingly, Miss Campbell says in her thesis introduction that she collected enough material for five volumes, including one of ghost and supernatural stories and another of fairy stories, primarily Irish.

I can find no evidence that any volumes of ghost or fairy stories were ever published. Miss Campbell published many of the European fairy tales from her thesis in Tales from the Cloud Walking Country (1958). She wrote a book on midwifery in Georgia called Folks do get Born (1946) and a fictional story of life on a Southern plantation during the Civil War and Reconstruction called A House with Stairs (1950).

She also wrote a 1942 book called Cloud Walking, which is called “fiction” in the Worldcat catalog, but reads like a documentary of Campbell’s time teaching in the hill country. The local dialect is not used to comic or condescending effect; the author thoroughly respects the people she wrote about; it is a fascinating and heart-breaking book.

But it is not fairies.

Miss Campbell studied and taught at a number of places in the United States: She took her Masters Degree at Indiana University with that distinguished American folklorist Richard Dorson. She also worked at Bowling Green State University in Ohio and retired from the University of Massachusetts, Amherst.  Miss Campbell never married and died in 1980.

I’ve inquired at Amherst and Bowling Green State University—where there seems to be nothing from Miss Campbell; at Indiana University—where there is a small amount of correspondence; and at the library at the University of Kentucky, which holds a collection of her correspondence and of hand-written manuscripts of her published books, but, alas, apparently not the fairy or ghost manuscripts.

Does anyone know where these unpublished manuscripts went? She was collecting stories in Kentucky at a time when the elderly narrators and old ways were beginning to pass. We can only hope that the manuscripts are safely somewhere, rather than having met the common Fortean fate of being thrown out as rubbish.