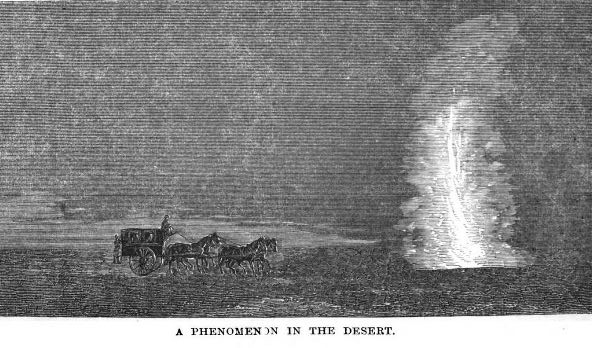 A Pillar of Fire by Night The strange light phenomenon in the Egyptian desert.

As I am drawn to spook light accounts like a moth to a flame, today I present a mysterious light seen in the Egyptian desert between Suez and Cairo.

Nor is the mirage the only phenomenon which makes its appearance in the desert. In February, 1851,I left Suez with my friend Maxton for Cairo, in a desert van, as I have mentioned on page 223. As we did not leave until nearly 5 o’clock in the evening, it soon became dark, especially as it had been raining a little, causing a haziness in the atmosphere. On reaching No. 13 Station, we had to change horses. Several teams were tried, but as the horses had all been out to clover, they were as wild as March hares,—kicking, plunging, jibbing, tearing, and rearing. This detained us for a full hour. At last we had a team that we thought would do, and off we went; but we had not gone more than a quarter of a mile before one of the horses turned as restive as any of its predecessors, and we insisted upon returning to the station. While waiting for another horse, we saw a brilliant light making towards us. It was about the size of a meshal, (See page 223,++) but more dazzling and more phosphorescent. We thought it was the light of some van coming specially from Cairo. It came nearer and nearer, and then, to our amazement, for some time gradually receded.** It then turned to our left, and suddenly disappeared.—”Here it comes again,” I exclaimed; “again from our right! Gone again! What can it be?” It could not have gone behind a hill, for there was only a vast plain for miles; neither could it have turned a corner, for the whole space was, as it were, an open sea of sand.

The horses being now all right, we started off again. “O, Maxton,” I cried out, “look at that beautiful light in the horizon! Now it expands, now concentrates. How beautiful! See! Here is a light coming this way. How fast it is making up to us! It must be another van. Hollo! Why it is going back again, like the other; now it turns to the left; now it is gone! Here it is again. Now it is before us. Now it stands still. We are making up to it. It is a Bedouin’s fire, surely. No, it is far too bright. How brilliant! Now it seems as if it were a large pillar of fire in the middle of a lovely garden. Now we are opposite to it; now we pass it. Still in sight. What can it be? I never saw anything so enchanting.”—So said we all. The scene all about, though dark and dreary enough, was awfully grand. We were going on in a direct way, nevertheless it seemed as if we were going round, and round, and round, and as if large animals were constantly passing us, in all shapes, in rapid succession; but it was all an illusion. Our eyes ached while admiring the scene; and I believe if we had each had all the eyes of Argus, they would have strained in vain, had they attempted to scan its magnificence. An Arab youth, who stood behind the van, seemed perfectly horrified, and clung to the door as if he had been followed by a ghost. I think this was withal the darkest night I ever saw in Egypt.

I have never met with any one who could explain these phenomena. The light could not have been a will-o’-the-wisp, as it was too large and as the desert is too dry for that; neither could it have been caused by a burning aerolite, or fallen meteor, as it was not stationary. It was almost as dazzling as the electric light which some of us have seen in England.

Gadsby tells us in dire and copious detail about his ill-health and how he came to visit the East. He was spitting up blood in 1843 and was advised to go to Madeira for his health. Instead he went to Bath. When he got no better, he went to Germany to consult the water-cure doctor Priessnitz. He was cured, but then relapsed, was advised to go to Malta. And after that there was no stopping him. He has an earnest, but rather irritating habit of citing scripture whenever he mentions some feature of Middle Eastern life. Speaking of unleavened bread made with evaporated sea-water salt gathered from the hollows of a rock, he notes that it is not very salty and cites Matthew 5: 13 about salt that has lost its savor. After making the obvious reference to the Israelites’ pillar of fire, Gadsby seems to have dismissed the mysterious light phenomenon and moves along to the next scene with the segue “But to return to the point whence I digressed” and a remarkable lack of curiosity.

++Those [vans] who leave at night are accompanied some distance by men with meshals, which are circular iron frames (probably the same as in John xviii. 3 are called “toreche,”) filled with burning wood, to give light, and they are then left to traverse the desert as best they may.

** How different was the pillar of fire which went before the Israelites! When they journeyed in the night, which they no doubt often did, to avoid the heat of the day, the pillar which guided them was no illusion, but a living reality. There was no receding and then disappearing there, but the pillar was their unerring light.

Any thoughts on what the lights might have been? Gadsby’s descriptions suggest, alternately, a will-o-the-wisp (although they aren’t usually found in dry areas), light pillars (but where are the ice crystals?) and the Aurora Borealis. (rare this far south?  Perhaps earthquake lights?

Spook me at chriswoodyard8 AT gmail.com