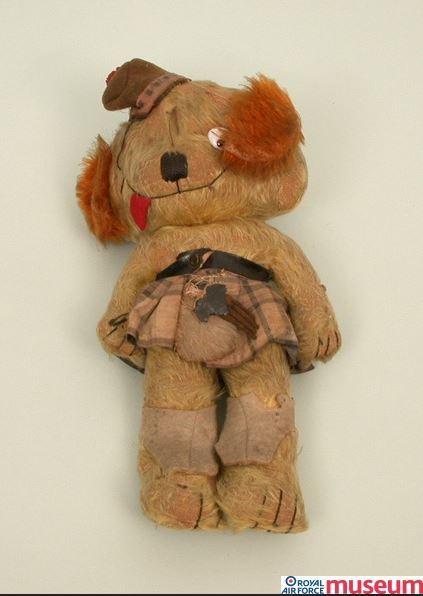 A Charm from Cheltenham Scotch Jock, a lucky charm for an RAF ace. https://www.flickr.com/photos/royalairforcemuseum/albums/72157631961281394

In celebration of the centenary of the Royal Air Force, today there will be an exactingly timed and choreographed aerial parade of one hundred RAF aircraft, finishing with a fly-over of Buckingham Palace. Some details about the participating planes and the route may be found here.

The Royal Air Force was formed on 1 April, 1918, during the last days of the Great War. To me the early planes, made of wood and canvas look like models—too frail to fly, let alone dog-fight or carry bombs—and seemingly held together with chewing gum and wire.  I’ve seen one incredible statistic that suggested that the average life of an allied pilot in 1915 was 11 days. There was no standardization of aircraft and flight training was often haphazard or abbreviated.  Many more men were killed in training accidents, rather than combat. With such odds, it was no wonder that pilots were a superstitious lot, swearing by talismans, charms, and mascots like Scotch Jock.

Today we hear from Dr A. Cosgrave George about a lucky charm from Cheltenham he sent a young R.A.F. pilot.

Sir,—A little over five months ago, a young friend of mine, who is in an O.T.C., [Officers’ Training Corps] wrote to me, enclosing a letter from his particular school chum, who was being trained as a pilot in the R. A.F. My friend’s object in writing was to beg for my assistance on behalf of his friend in the R.A.F. The latter, when just on the point of obtaining his “wings” had crashed badly two or three times in succession, with the result that he had completely lost his nerve, and was in the very depths of despair, for it meant that all hope of obtaining his pilot’s certificate had gone. In his trouble he had written to his old school friend, and the latter in turn wrote- at once to me, begging for my prompt assistance, ”occult” or otherwise.

I had in my pocket at the time a little charm that my wife had given me quite two years ago, and which I had invariably carried in my waistcoat pocket. This I at once, after carefully sealing up in a packet, forwarded to my O.T.C. friend for his R.A.F. friend.

I enclosed instructions that it was to be worn night and day without fail, and that it was never to be touched by any one but the wearer. If those instructions were carried out, I said that he would regain his nerve at once, that he would never suffer any injury whilst flying, and that whoever would be with him in an aeroplane would also be similarly protected.

Very shortly afterwards I heard that his “nerve” returned immediately on receiving my charm and that he was being trained as a night observer. Then that he had been sent out to France and was busy assisting in night bombing raids. Beyond that he was alive I heard nothing more about him until I received a letter from him, dated September 11. I enclose a copy of his letter, thinking that you (or the readers of your magazine, if it is worth while printing), may find it of interest. Since I got the letter, I have heard from my O.T.C. friend, and he in turn relates some more wonderful escapes that his friend has had.

P.S. I enclose my card. I have been an inquirer and experimenter in occult matters for forty years, so you will understand that the charm (bought for 1s. 6d. at Cheltenham) was specially prepared by me for the particular purpose I intended it for.

The good doctor, who seems to have been associated with homeopathy and who believed he had the gift of healing, helpfully included a grateful testimonial from the unscathed pilot.

Copy of letter from R.A.F. man.

I have not forgotten that you said you would be interested to hear from me. You will remember that five months ago you gave me a little charm after my crash, and temporary loss of nerve, which A. P. told you of.

I have worn your charm religiously, and though of course I cannot say how far that is instrumental, it is certainly true that I seem to have been especially protected. Only a week ago I was crashed badly by my pilot through the engine cutting out in the air. We came down on a sunken road, and wrecked the machine absolutely. If we had not been quick to put out the first flames, we should have been on fire very soon, and we were carrying 350 lb. of high explosive in the shape of bombs. The crash was sufficient to kill us, and it is marvellous that the bombs did not explode, for they were knocked clean off the racks, which crashed into the embankment. Yet I escaped without a scratch, and the pilot almost as easily.

Apart from that, five times our engine has failed. Each time by that “untraced causation” which is called “luck,” it has been on this side of the lines. Otherwise I should have been a prisoner or worse. And each time we have managed to make a safe landing, which in unknown country at night is nothing short of wonderful. So whatever may be the truth of things, I am certainly happy in my horoscope. I thought I would let you know this. I shall be coming home to England in a month, to have another try for my pilot’s wings. I shall have as much need then of your charm.

How “lucky” is a pilot if he’s crashed at least eight times? Without injury, to be sure, but that Oscar Wilde line about “To lose one parent may be regarded as a misfortune; to lose both looks like carelessness” springs to mind.  Eight planes lost certainly might be construed as carelessness, but perhaps in wartime such things were expected. Or was this just a case of taking the R.A.F. motto “Per Ardua ad Astra” “Through Adversity to the Stars” literally?

A. Cosgrave George appears in the correspondence columns of the Occult Review for May, 1920, discussing his healing gift and its restrictions. He is also mentioned in a publication I cannot access: The Homeopathic World, in 1920, but that is all I know of him. I’m intrigued by his statement that the charm (cheap at twice the price and probably not a teddy bear, since it was carried in a waistcoat pocket) was bought by his wife in Cheltenham. Was she on a spa holiday or at the races or was there a specialty shop there that sold lucky charms: “The Cunning Man” or “The Fairy Doctor”? And how did he “prepare” the charm to transfer the luck from him to the young flier? Did Dr George find himself suddenly beset by bad fortune or could he simply return to Cheltenham to purchase another lucky talisman?

If you know or have any other information on the helpful Dr George, wing it to Chriswoodyard8 AT gmail.com.