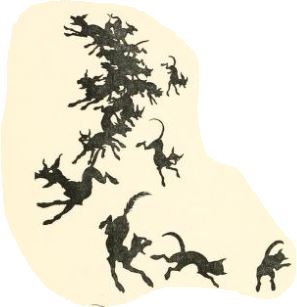 I normally live my life in an assortment of subfusc garments that no doubt raise questions as to whether I am a member of some religious order, in mourning for the victims of the Black Death (1347-1351), or simply from the Old Country.

Our daughter was recently married. When I asked what I should wear, she replied, “Not black.”

While I pondered which color would complement the bride, who was lovely in pink and white, or the groom, so handsome in his blue family tartan, the experience raised questions about the influence and symbolic value of color. It also inspired my over-researched and over-arching theme for the month of Halloween: a rainbow of ghosts.

The cliché spook is, or course, clad in a white sheet or appears as a vaguely-human-shaped white mist. Yet in reality (or as much reality as these things have) ghosts, monsters, and paranormal entities come in a surprisingly variegated palette. Paranormal researchers have tried to account for this variety in terms of auras, psychology, synaesthesia, and Jungian symbolism. And while I’ve written about a “color doctor,” and the tints of torture I’m really more interested in full-spectrum specters. White is so passé and is often unkind to the dead complexion. Give me the vibrant red, pink, and blue ladies, men in black, luminous orange spook lights, or the Gentry in green.

So grab your crayolas and get ready to color outside the lines of some multi-hued haunts. We open with a strange story of cats of many colors embedded in a longer narrative about cow-witching on the Island of Islay.

The first part of the story told to me was ordinary enough in its way; it was the second part of it that struck me as awful in its realism and the simple faith with which it was told.

The woman I speak of who bewitched milk inherited the power from her mother. The mother seems to have had it in a stronger form, and was a woman of strong character, full of the primitive passions of hate and revenge, and with full belief in her own gifts. This woman, the mother, had been wronged by the man who should have married her, and who married another girl. As the bridal party were returning from the marriage feast to the bridegroom’s house, they had to cross Loch Indall, and on the way they were met by the wronged woman. She knelt on the road in front of them, and the pipers stopped playing. She tore off her white mutch [cap], and placed it on the ground, before her, loosened her dark hair and let it fall over her shoulders, and raising her hands to her head, she cried down curses. And her last words as she raised her voice in wailing and denunciation were: “It’s a het supper ye’ve had the night, but it’s a cauld breakfast ye’ll have the mom.”

The boat in which the bridal party crossed Loch Indall was upset in a squall, and all were drowned.

This woman passed over a few years ago, and I listened to the tale of her passing, told me in an Islay cottage when the darkness of night lay over the hills of Jura, and the wild rush of the tides in the Sound tore past the window.

“They’ve an awfu’ sight o’ freets about here, and I’m no believing in their freets. But she was lying in there in this vera house, and they were waiting for her to dee, and they thocht she was deid, and they began dressing her, and a man went awa’ to the inn to get a bottle of whisky, and they asked him there if she was deid, and he said she was. But she wasna deid at all, and they got an awfu’ fricht, for she started up and spoke terrible to them. She had been in a kind o’ a trance, and she deid soon after. There was a man coming up the hill. Ye ken him, him wi’ the grey cap that lives doon there, and he heard the maist awfu’ screaming and yelling, no like anything human, and there were over thirty cats there, of colours that ye never saw before, all colours, red and black, and blue and yellow, and they were all fighting and clashing and yelling, and he got the maist awfu’ fricht he ever had, and the whole lot o’ them went fighting and screaming over the hill and out o’ sight. And he is a sober man. He hadna had a drop, and he hasna touched whisky for fourteen years. There was a woman coming down the hill on the other side, and she saw and heard them too, and it was the maist awfu’ thing she ever saw. They wema ordinary cats at all. The noise was fearfu’.”

“Could they have been the cats about the place ? ” I asked, though I did not believe that they were.

“These were no’ the cats aboot the place at all. The like o’ them had never been seen before. They were far bigger and wilder. They were just the evil spirits out o’ her. Ye see, she was a witch.”

The quiet grave tones in which the man spoke carried conviction, and yet he said he did not believe in what he called “freets.” His belief in them was deeper than he himself knew. That was seen at once if one threw the slightest doubt on any story. It was useless to say that the wedding party might have been drowned in any case, for squalls often rise on Loch Indall You are silenced at once. Did not the ill wish come true?

I’m reminded of Wanda Gág’s Millions of Cats as well as the folktale: King of the Cats. There are also some grim 19th-century stories of cats fighting and attacking corpses at wakes. (See The Victorian Book of the Dead.) While “freets” suggests a supernatural being, it is defined as a superstitious belief or an omen. I suspect omen is the correct usage here, except that the cats are described as the witch’s “evil spirits.” Were they demons left without a host after her death or her familiars? And I wonder if the “colours that ye never saw before” were just those never before seen on cats or if there is a hint of tints beyond the ken of mortals?

Other multicolored ghosts? chriswoodyard8 AT gmail.com, who settled on cornflower blue, in case you were wondering.