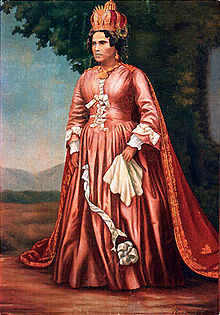 Queen Ranavalona I, whose death was predicted by the Death-fires of Madagascar

I regret to say that until a short time ago “lemurs” and “Dreamworks cartoon” was the extent of my knowledge about Madagascar.  I hope any specialists reading this will be kind to my ignorance. But I know spook lights and mysterious fires as omens of death and that’s how I blundered into this account of the strange fires said to presage the passing of the Malagasy Queen Ranavalona I.

The care evinced by the Malagasy to honour the dead is shown in nothing more strikingly than in the mixture of barbaric and civilised splendour with which the funeral rites of the sovereign are celebrated….But little is known of the funeral ceremonies at the death of Ranavalona I., for there were very few Europeans then residing at the capital. Shortly before her death there appears to have been some unusual atmospheric or meteoric phenomena seen, which were believed by the people to be premonitions of her death. An extract from one of these accounts, sent to the Rev. W. Ellis, at Mauritius, before he came on to Madagascar, is a good illustration of the imaginative character of the Malagasy mind, and of the tendency of the people to believe in omens, portents, and supernatural interpositions. It is as follows:—

“On the 12th of April, 1861, there was an appearance of fire from Ankemiheny extending to Ranofotsy and unto all the mountains. When the people in the country round saw the fire, they kindled fire near their dwellings, for they said, ‘Perhaps the queen has bathed again;’ * for to those in the country this light appeared as if it was in the capital, and to those in the capital it appeared as if in the country. There were also sounds or voices like music coming up from Isòtry (the site of the prime minister’s tomb) to Àndohàlo (the daily market, above a mile distant); and when the people heard the sound they came to look, but nothing was seen; only sound was heard; and it was a pleasant sound, though making sad, for it was the end of the year.

*At the annual bathing festival at the commencement of the year, it is customary, in connection with the bathing of the sovereign, for a fire to be lighted to announce this fact to the people, who then light fires: thus following the sovereign in observing the customs of the feast; and on this occasion, the people in the country around, seeing the light or fire, supposed it was connected with the bathing of the queen.

“It was in fàraràno, or autumn, and about seven o’clock in the evening, when this fire was seen, and it lasted for an hour. Next morning, the queen, inquiringly, said: ‘What fire was that last night? Do you kindle fires again before the feast of the new year?’ And the attendants answered, ‘We kindled no fires.’ And when the queen heard that, she said to the heads of the people, ‘What fire is this?’ And they answered, ‘This is not the fire of man, but of God.’ And some said, ‘It is to increase the kingdom of the sovereign.’ Then the queen inquired again of the judges and heads of the people, saying, ‘What is it thought this fire is?’ Then said those whom she questioned,’ From Andrian-ampoin-Imérina (ancestor of the present dynasty) and Prince Ramahàtra, like a foreshadowing of coming death. Like that, for it is small, yet not like that, for it was over the water and the rice, and valleys and hills, although it was not high nor low.’ [I don’t understand this. Is there a suggestion in the placement of the fires that the death is not imminent?]”And from that day forward the queen prayed earnestly to the idols, the objects of her trust, for she was afraid. And there was an officer who said to the prince, ‘This fire is a jubilee, to gather together the dispersed, and to redeem the lost.’ And the hearts of those who heard that were deeply affected.”

Whatever was the cause of these singular appearances, the people were not mistaken in their expectations of approaching changes. The queen soon afterwards became ill, and eventually died within four months from the time when this mysterious fire was seen; so that the reign of terror ceased, and the beautiful words of the officer to the prince were a true prophecy: the “dispersed” by persecution were “gathered together,” “the lost” were “redeemed,” and the bright opening of the reign of Radàma II. was indeed “a jubilee ” to the people, who had been ground down under the cruel oppression of Rànavàlona. Madagascar and Its People, James Sibree, 1870

Queen Rànavàlona was judged harshly by European diplomats and historians as a tyrant and a reactionary.  The account above was written by William Ellis of the London Missionary Society, which was maginalized by the Queen’s anti-Christian decrees. Obviously he has imposed some of his own agenda when writing about “jubilees” and “redemption.” Some modern historians have attempted to see past the forced-labor, prolonged war, and executions of the Queen’s reign to find in her a ruler struggling to consolidate her power while resisting British and French imperialism.  While she acknowledged the aid of European technology and expertise in modernizing her kingdom, she canceled treaties with Britain and decreed that none of her subjects should practice Christianity, fearing the influence of the missionaries. The account above suggests that her death was unexpected, even though she was 83 at the time of her death. She was succeeded by her more liberal son, Radama II.

While the fires may have seemed an omen of her death, they also foreshadowed a disaster at her funeral: a barrel of gunpowder exploded, killing a number of bystanders and burning several palace buildings.

As a final fortean fillip, when the Queen’s son and successor Radama converted to Christianity and reversed many of his mother’s isolationist policies, a wave of “spirit possession”  swept the land.

The public mind was in state of excitement at that time on account of the remarkable political and social changes introduced by the then king, Radama II. It is unnecessary here to explain the nature of these changes, or the way in which they moved the people generally and roused the superstitious feelings of the lower classes. A pretty strong anti-Christian, anti-European party had arisen, who were opposed to progress and change. This strange epidemic got into sympathy, especially in the Capital, with this party, and the native Christians had / no difficulty in recognizing it as a true demoniacal possession….Many of [the possessed] professed to have intercourse with the departed, and more particularly with the late queen (Ranavalona I.). In describing their sensations afterwards, some said that they felt as if a dead body was tied to them, so that with all their efforts they could not shake themselves clear of it; others thought that there was a heavy weight continually dragging them downwards or backwards. The Antananarvio Annual and Madagascar Magazine, Volume 4, Issues 13-16, 1889