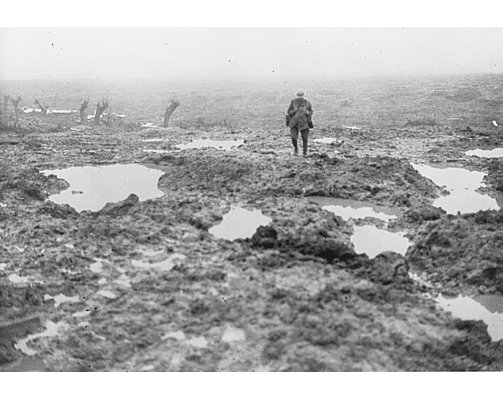 Continuing the theme of yesterday’s Veterans’ and Remembrance Day, two apparitions from the Great War.  I have previously posted on the elusive witnesses for the Angel of Mons and other heroic battlefield apparitions seen in the heat of battle. These are ghosts seen in still dangerous, but quieter circumstances.

One of the most remarkable stories was told me recently by a lieutenant who had been invalided home in Canada, a man of fine family and unquestionable veracity. The names I shall use in the story are fictitious, but the real ones will be given privately if corroboration of the story is desired.

Lieut. Smith was stationed in No-man’s-land, and one evening was taking some of his men from one place to another. They were marching along, very fatigued, but undisturbed except from the usual dangers of distant shell fire.

Suddenly Lieut. Smith saw one of his men, Private Rex, begin to lag a little behind the rest, and judged that he might be ill. Watching him, he saw his pace continue to slacken until he was marching in line with himself. For a private to fall out and march beside his officer was, of course, unusual, and so the latter challenged the procedure. He asked the private if he were ill, but he replied in the negative; he asked if he were cold, but the private again said “No.” But Lieut. Smith clearly saw that something was wrong with the man, and he therefore stepped closer to him and asked him if he were hungry. The private replied, “A little.” The officer had a package of malted milk tablets in his pocket, and gave him some. As he took them the officer noted that his hand was icy cold and that he was very pale.

Just at that moment Lieut. Smith’s attention was diverted by the necessity of giving some commands to his men and of walking to another position. When he returned to his former place, he observed that Private Rex was no longer there, but as there had not been time for him to return to his own squad, the officer thought he might have fallen because ill, or possibly because wishing to desert. So he halted the regiment, and went back some distance to look for the missing man. Thinking there was some trouble, a junior officer came running to Lieut. Smith to give him assistance. The latter told him how Private Rex had fallen out of his place, seeming to be ill, accepted the food tablets, and then suddenly disappeared, and the officer suggested that a search should be made for him.

The junior officer, in great astonishment, replied that there must be some mistake, as Private Rex had been killed in battle and he had attended the burial three days previously. He also reminded Lieut. Smith that he also had been present. The lieutenant then recalled the fact which, because of the stress of subsequent fighting and of the death of so many others, he had momentarily forgotten.

But Lieut. Smith told the second officer, as he repeated emphatically to me, that he had certainly seen, talked to, and touched Private Rex that evening; that it was Private Rex, and no other, who walked beside him; that he knew him well, and that it was truly his icy hand into which he placed the tablet of food, and his pale face into which he had looked as he asked him the questions about his health.

Lieut. Smith said that it was quite a common occurrence for men in the war zone to see the ghosts of their comrades who had been killed. And he added, “It takes away all fear of death, for I know that Private Rex lives, though dead.”

The Lieutenant’s amnesia is a theme often found in stories of paranormal events: a witness sees and speaks to a seemingly real person, but only remembers after they disappear or walk away that they are dead. The detail of the dead Private’s pallor and cold skin is also often found in stories of this sort–the individual is recognizable, but looks deathly pale or ill. But what are we to make of the Lieutenant’s statement that this was “quite a common occurrence” in the war zone?

The second story is remarkable for its many witnesses and the intact nature of the Colonel.

[H]ow can the sceptic prove to the satisfaction of over one hundred officers and men that they did not see Col.___ on the day that he died several hundred miles distant from the trenches where they were stationed?

This is the story. Col.___ of one of England’s famous regiments, was idolized by the officers and soldiers under him. There was no sacrifice they would not make for him, and he was equally devoted to their interests. He shared their dangers in Flanders for a year, until one morning he was wounded by a hand grenade which caused the loss of his right arm. When after a number of months he was fitted with an artificial arm he used all the influence possible to get back to his old regiment. The War Office was obdurate. He could not return to fighting in Flanders. However, if he wished he could have the command of a garrison battalion that would first be landed at Lemnos.

He accepted, but his heart was with his old regiment. They heard of his new command, but all of them, officers and men, believed that the colonel would succeed in getting back to them. Shortly after landing at Lemnos the colonel became ill with dysentery. He was put aboard a hospital ship which reached a channel port on a Tuesday. At noon the next day the colonel was placed on a hospital train, but he never reached London, for he died just half an hour later.

At the hour of the colonel’s death a company of his old regiment saw him in their trench in Flanders. The company sergeant-major turned to the company commander, “Beg your pardon, sir, here’s Colonel ___ coming round; didn’t know he was back again.”

The officer looked up, and there stood the colonel, with his cap just a little on one side as he always wore it and with a pair of binoculars, familiar to all the men, slung around his neck.

The company commander started toward him, dropped his stick and stooped to pick it up. When he straightened up again the colonel was gone. Down a communication trench rushed the officer to company headquarters. The officers there had also seen the colonel. “We looked at him for fully a minute, then suddenly he was not there. We can’t make it out, either, for we thought he was in the Dardanelles. Besides all the men saw him, and he had both his arms.”

Not until the next week did the regiment learn of the colonel’s death. Not one of the hundred and more men who had seen him even knew until then that the colonel had left the Mediterranean.

No matter what you and I believe, no matter what arguments we might put forward in attempting to prove that the colonel or his spirit did not appear, that company saw its former colonel. They know they did. . . .

Carrington’s book is full of stories of wives, parents, and siblings being notified by their loved ones that they were either dead or, in spite of reports, alive. In many cases the ghostly soldiers arrive at the very moment of death or show the witness the circumstances of their deaths–all later verified–the book contains many letters trying to corroborate these apparitions.

While I have seen similar stories from the Second World War, I do not recall anything like these death-in-battle apparitions (one can scarcely call them “deathbed apparitions”) from the Civil War. (I’m speaking of stories from contemporary witnesses, not the many ghostly Civil War soldiers that populate the internet.)  Is there a literature of dead soldiers who return from the Vietnamese conflict, the Gulf Wars, or Afghanistan? Carrier pigeon Cher Ami is standing by to wing your message to chriswoodyard8 AT gmail.com

See also these weird tales from the trenches of the Great War.