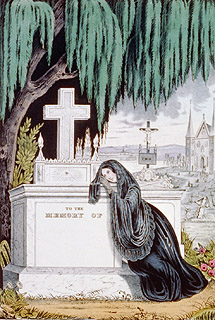 Fiends for a Funeral: The Amateur Mourners An 1846 mourning print, complete with swooning mourner.

In the 19th-century press there was a slight, but revealing collection of stories about funeral fanciers. These were mourners without portfolio, who attended funerals merely for the fun of the thing. As this fashionable undertaker reports, they do not seem to be ghouls, but are generally sympathetic souls.

People Who Are Mourners Regularly, and Find Comfort in so Being.

“Do you see that nice-looking little old lady over by the stained window?” asked a fashionable undertaker of the reporter. “I mean the quaint, respectable-looking little personage, with the black satin dress and the black crape shawl.”

The reporter saw her.

“Well,” continued the undertaker, with an appreciative smile, “she’s as fine a regular attendant as any establishment in this city can produce. I send her an invitation to all my nice funerals, and I have sometimes sent a carriage for her when I knew mourners would be scarce. She is never really happy unless she is at a funeral. She won’t touch weddings, as most women will; her sole amusement, so to speak, is a first-class funeral;” and the undertaker looked over to the old lady with a tender professional interest.

“I have some other nice people on my list,” he went on. “One of my most graceful mourners live in Forty-eight street, and seldom gets down this way, but she hardly ever passes a day without a funeral, and I never saw her at one when she couldn’t’ shed tears with the best of them. She’s one of the heart-brokenest ladies I ever had for a ‘regular.’ Does she really feel badly? Well, I should say she did, most decidedly. She always has a word to say to the family, if she thinks they need comforting, and is very careful to learn all the particulars. Why, she can tell me all the details about some of my own funerals that I had forgotten years ago. She’s as good as a set of books.

“Oh, no, there’s nothing hysterical about these cases at all. I’ve got some men that do just the same thing. There is one now. He’s a curious customer. I sometimes lose sight of him for six month, and then all of a sudden he’ll turn up and not miss a funeral. Of course, I couldn’t ask the women folks why they came, but I asked him one day. He said he couldn’t describe exactly the kind of feeling it gave him, but he thought it sort of quieted his mind and soothed his feelings like. He made one remark about it that I never could quite get the hang of, though I dare say it had a certain sort of meaning for him. He said, ‘ I haven’t got any friends at all myself, and so I like to go to funerals.’ A lady volunteered almost the same kind of remark to me once after she had been to four or five of my best funerals. She said, ‘It makes me feel kind of friendly, you know, and then they are kind to me, and, besides, I feel afraid and solemn, and it always does me good.’

“I think it would be unjust to call it mere curiosity that brings them here, though I have noticed that some of these people watch every detail with the most intense curiosity. They seem fascinated by the presence of death, and their sympathies are moved by the grief of the living. You might think they were very solemn people but the contrary is the case. Some of them are remarkably cheerful, in fact. That little old lady is always very pleasant and vivacious after the ceremony is over. She always comes up and shakes hands with me and is as agreeable a person as one would wish to meet.

“There’s an unusually lively and pleasant gentleman living in the Ninth Ward who occasionally drops in at my funerals. He does not make it a point to go to them, but, as he says himself, he can never get past them. He told me he was obliged to go in; no matter how important business might be, he would forget all about it as soon as he saw the hearse and carriages. The first time I saw him at a funeral I thought he was certainly one of the nearest relatives. He is a very large, round-faced, benevolent-looking gentleman, that would be observed in any crowed. On this occasion, after he had looked at the deceased person for a few moments, he became greatly overcome with emotion, and someone led him to a chair. Each one of the mourners supposed, of course, that he was known to the others. He wept throughout the discourse, and after it was over shook hands all around with the mourners, and showed a good deal of fervent, and, I have no doubt, genuine sympathy. I did not know until some time after that he was a dummy—that’s the name we sometimes call them by. This man is really as jolly a fellow as you ever met, and they say he has been requested to leave theaters more than once, in case he would not subdue a particularly substantial laugh which he possessed. In fact, most of these people who love to go to funerals are good-hearted people. It is not true, as has sometime been said, that they are touched a little in the head. The fact seems to be that they are emotional and sympathetic, and are strongly affected by any awe-inspiring scene. Even young girls and boys have now and then a fancy for funerals, though none of them can say why. Most of them say it makes them feel better, but if you ask where or how, they cannot say. They all watch everything as though in a sort of a dream.

One of my bet hearse drivers used, as a boy, to be a regular attendant at funerals. One day he came around to my stable and asked if he might help us. I let him do so, and after a while he used to take a hand regularly in keeping the hearse in order. When he got old enough to go to work his father had to bring him to me—he wouldn’t work any-where else. If you ask him why he likes this business, he’ll tell you he don’t know.”

A slim, middle-aged man here addressed the undertaker, and was received by that personage in a most friendly manner. The slim man suggested that there might be some way he could be of use before the services were done.

“Now, there’s a man,” said the undertaker, “who is interested only in the mechanical part of the business. He goes to almost all my funerals, but seems to feel no special sorrow or sympathy. His whole mind is taken up with the conduct of the funeral. To suit him, the business must be done with the most solemn exactitude. He said to me the other day that if he could only once have complete charge of a large funeral he would be happy for the rest of his life.”

Mrs Daffodil has also posted about “Fiends for a Funeral.”

Moving beyond the amateurs de deuil, there were also hired professional mourners (some cities had mourners’ unions!) and, of course, con-men–and con-women, who followed the coffin.

When Arrested She Wails Some More and Borrows From Judge.

LIVED OFF HER TEARS

Wore Reversible Coat With Gray Inside to Turn When Work Was Done.

It will be some time before Clara Howell, professional mourner and weeper at funerals, will be back at her vocation again. She has been arrested by Policeman Burdette and was released by Justice Gavin on her promise to go to Littleton, where she has relatives, and remain there. Incidentally she “touched” the justice for 25 cents to pay her fare out of the city.

Clara Howell continually wears a black scarf, which extends over her head and under her chin. She never has been seen on the street or at funerals without it.

She was arrested at Miller’s undertaking establishment, Seventeenth and Curtis streets, by Burdette, who had been watching her.

She has been in the habit of begging, says the policeman, and never overlooks a chance to ask for money. But it in the role of professional mourner that she shines.

Slipping quietly into an undertaking chapel or even a private home where funeral services are being conducted she would take a seat and begin to weep. Naturally some of the relatives of the deceased person would be anxious to learn the identity of the mourner and in many cases would address her, whereupon the disconsolate one invariably would say that she was acquainted with the departed one and incidentally call attention to her own poverty.

On such occasions it was easy to beg or borrow and, in this manner, Clara Howell succeeded in “getting the coin.”

The woman wears a reversible coat, one side being black, for mourning purposes, and the other gray, for street wear.

Policeman Burdette received many complaints concerning the woman from undertakers and finally decided to arrest her on a charge of vagrancy.

Shirley Jackson has written about 1960s funeral fanciers who were in it for the food following the obsequies.  I have heard from a woman who lives in Manhattan, that there is an entire class of women who scan the obituaries for women’s funerals. Then they attend and condole with the bereaved husband, pretending to be a good friend of the deceased wife. Object: matrimony with the hapless widower.  Apparently these women recognize that there is a limited window of opportunity in which to snap up the grieving male before he is captured by some casserole-toting neighbor.

Are you a fiend for a funeral? Did you meet your spouse at a wake? Put on an expression of genuine sympathy and send to Chriswoodyard8 AT gmail.com

Similar (and more bizarre) stories are found in my book: The Victorian Book of the Dead.