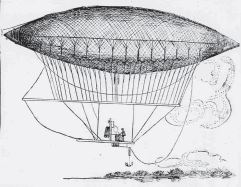 Ending War with Ionic Vibration and a Vacuum Cleaner

I have a soft spot for cranks and crankish inventors. Here are two “fellows” with Big Ideas about airships and aerial weaponry for a world at war. We have met Dr. Owen before; he had a theory that Bacon murdered Shakespeare and hid his embalmed head in a box.  Here we meet this Renaissance man as inventor. The charmingly-named Mr. Vogelzangs is a complete unknown, but, to his own mind, shows great promise.

Why Not Let These Two Fellows Put An End To European War?

Detroit, July. 2. Dr. Orville W. Owen of Detroit, who says he proved that Bacon wrote Shakespeare, has been delving deep into nature and has just announced that he has concluded his experimental work upon a machine which, by absolutely neutralizing gravitation through ionic vibration, will revolutionize warfare, commerce and all the arts of sciences of the world and will raise mankind to the stars.

Dr. Owen declared that in his desk are letters from Col. J.E. R. Seely, formerly war minister of England, offering to pay any price for the secret of his invention.

“But my country, however, unwilling or unheeding of its own needs and my offers, shall have the chance to adopt my discovery and control it absolutely,” said the inventor.

He declared he expected to place the whole matter before the advisory board of inventors recently created by Secretary Daniels. [The Naval Consulting Board  headed by Thomas Edison established 1915 “for utilizing the natural inventive genius of Americans to meet the new conditions of warfare.”]

Dr. Owen’s invention is built on the principle that all things in absolute vibration cannot touch. Those in opposite vibration always tend to come together. Thus is explained, said Dr. Owen, the death of many of the most daring aviators who have driven their planes into “zones of silence,” or holes in the air, where there is no vibration, but a vacuum that causes them to drop to the earth.

With the new craft, Dr. Owen declares, he would go ten miles into the air, while present flying craft can only ascend a little more than three miles. With one of his airboats, operated by a powerful gas engine, Dr. Owen says, he could raise 10,000 tons of dynamite miles into the air.

“Think what this would mean to a country at war with another,” remarked Dr. Owen. “I could have prevented the European war if I had sold my invention to the British government, but I refused because I wished my own country to benefit.”

Dr. Owen had been thinking of airships for several years. In 1912 he claimed that, in excavating under the River Wye, he had found proof that Bacon had designed an airship. He was cagey about the details, but utterly certain of his facts:

“We haven’t  discovered the airship,” said the doctor yesterday, “but we have found descriptions of one in our excavations in the River Wye which are undoubtedly the work of the man who we are certain is the author of the plays attributed to Shakespeare. And he, of course, is Sir Francis Bacon.” Cleveland [OH] Leader 2 January 1912: p. 3

The article about Dr. Owen’s ionic vibration invention led into the story of John Vogelzangs.

This is the assertion of John Vogelzangs, 3706 Emma street, now employed as night watchman by the Crawford Manufacturing company.

“I am for universal peace. War is wrong. There should be a body of arbitrators for all international disputes. But time is not ready for that yet, and since it is not, then we should make every preparation for war,” continued Mr. Vogelzangs, who has gained considerable fame as an inventor of various kinds of implements.

“Secretary Daniels’ plan of asking the inventors of the nation to become members of an advisory board is a good one and will mean that the United States will become the greatest war power on the globe,” he added.

Mr. Vogelzangs refused to give out much information about his invention, with which, he claims, he could sweep armies and navies off the face of the earth. He admitted that it was a method of extracting electricity from the air thus operating airships which could be used with amazing results.

Poverty, said Mr. Vogelzangs, prevents him from developing his idea and presenting it to his country. This same reason halts him in many other things which he has invented. The Ann Arbor[MI] News 27 July 1915: p. 4

A very similar article added these details from Vogelzangs:

He refused to give out much information about his new device, and said he lacked money to carry on the work and displayed a letter from Mr. Daniels, written before the war broke out, saying this nation was not ready to take up his ideas. The Electrical Experimenter, September 1915

The secretive Vogelzangs used a telling phrase about his invention which could “sweep armies and navies off the face of the earth.” The only patent I could find for him was a vacuum cleaner.  Shades of Our Man in Havana.

I always wonder about those official letters supposedly from government officials, such as Owen and Vogelzangs both claimed to have, congratulating the inventors on their great discoveries and begging to purchase the secret. Are they written in trance and in a different hand by the crank? Or are they purely imaginary?

Send proof of your theories sealed in a tamper-proof envelope to Chriswoodyard8 AT gmail.com